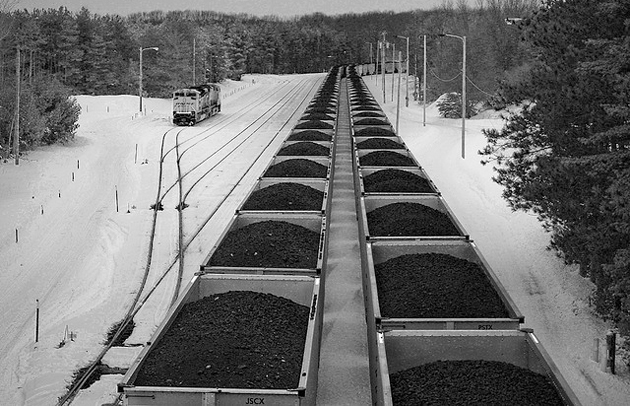 American energy comes from an array of different resources—the fossil fuels of oil, gas and coal, as well as nuclear and renewables. We can compare these energy sources and measure our total consumption, even though energy end-uses are diverse and dissimilar.

At the moment, fossil fuels make up the lion’s share of our energy consumption, but it hasn’t always been that way. Wood and water fueled America up until the end of the 19th century, when coal took off as the latest and greatest energy source. Since then, carbon-intensive coal has been supplanted by oil and gas and coal’s importance is on the wane in this country; the vast majority of coal-fired power plants are over thirty years old.

Over time, the energy picture has only become more complex and chaotic, with fossil fuels of all kinds now battling it out with renewables and nuclear to fuel America.

The muddle is laid out clearly—as far as that’s possible—in this excellent flowchart from Grist.

Broadly speaking, there’s a movement towards the cleaner energy sources of natural gas and renewables, but it’s a very slow and gradual process. To paraphrase the awkwardly apt analogy of energy researcher Vaclav Smil, changing the energy system is like turning around a giant oil tanker—it takes a very long time. For a new energy source to supplant an earlier one entirely takes generations.

So, where is American energy headed in the near-term? Looking back on Obama’s first term makes clear there aren’t likely to be radical changes in the near future. In his State of the Union address Obama laid out the “all-of-the-above” approach to energy, supporting renewables, as well as developing America’s fossil fuel resources.

Sure enough, this policy package has come under attack from those who view it as insufficiently supporting renewables, or as unfairly penalizing fossil fuels. Greens would like to see America take its cue from Germany, where the government has set ambitious targets to overhaul the energy system, becoming 80 percent renewable by 2050.

Republicans criticize the President’s agenda as another example of overregulation and would prefer the government to stop “getting in the way”, though many support their local energy industries, be they wind, natural gas, coal, or nuclear.

Despite its detractors, the “all-of-the-above” policy has also been endorsed by some energy researchers who see it as the compromise solution that best serves America’s needs. Michael Levi’s piece in Foreign Affairs advocating for this position offers a good overview of the arguments and makes a compelling case.

Regardless of the pros and cons of the current government policy, one thing is clear: the trajectory of America’s energy looks strikingly different today than it did just half a decade earlier. The shale gas boom has hugely increased the amount of energy America produces domestically, with implications well beyond the climate and even the economy.

Tom Donilon, former National Security Advisor to the President, recently highlighted the important impact of America’s relative energy abundance on foreign policy and national security. The argument has received considerable airplay elsewhere as well, and essentially suggests that America’s bargaining position on the global stage is improved now that reliance on energy from dodgy dictators is reduced.

While this may be true, America is unlikely to reach any kind of meaningful energy independence, so it may be time for natural gas supporters to temper their enthusiasm somewhat. The ripple effects of the gas boom are far from visible at this stage, so op-eds claiming to reveal the long-term impacts should be taken with a pinch of salt.

What’s more certain is that, in policy terms, the next few years will be more continuation than change. Obama’s “all-of-the-above” position seeks to give something to clean energy advocates and to oil and gas proponents.

However, there are dangers in trying to be all things to all people, and Bryan Walsh at Time cautions that “the middle ground can be lonely ground.” In other words, it will be hard to move America’s energy policy forward effectively as long as the two pressure groups continue to be unwilling to contemplate compromise.