Cases of an illness known as valley fever have increased dramatically over the past decade. So what is it exactly? And who’s at risk? We went to California’s Central Valley to find out—watch the video above, then read this handy FAQ.

What is it? Coccidioidomycosis—commonly known as valley fever—is a fungal disease. Its spores live in the soil. If the soil becomes dry and dusty, people and animals can breathe it in, allowing the spores to grow inside their bodies.

What does valley fever feel like? It depends. Some people who get valley fever don’t have any symptoms at all; in others the disease resembles a cold or flu. Some develop a pneumonia-like condition from the fungus in their lungs. In rare cases, the fungus disseminates and can even attack the brain. According to the Centers for Disease Control and Prevention (CDC), more than 40 percent of people who become ill from valley fever may require hospital visits; the average cost of that visit is $50,000. Between 1990 and 2008 there were 3,089 reported deaths from valley fever, though some public health experts suspect that it was an underlying cause of many more deaths.

Who’s at risk? People who live in or travel to the southwestern United States—where the disease is endemic—are at risk. Within that area, working outdoors—at construction sites, archaeological digs, and other places that involve undisturbed soil—also seems to be a risk factor (though plenty of people who don’t have outdoor jobs—for example, this little girl—also get valley fever). Prisons have been hard hit; 18 inmates in California’s Central Valley have died of valley fever in the past few years, and many more have become ill. The state of California recently ordered the transfer of 2,500 prisoners out of two Central Valley prisons with high incidence of the disease; many of the prisoners set to transfer are black and Filipino, two ethnic groups that seem to be disproportionately affected by the dangerous disseminated form of valley fever. Women in their third trimester of pregnancy and people with compromised immune systems are also at higher-than-normal risk.

How is valley fever diagnosed? That’s one of the problems: In chest X-rays, valley fever is very hard to distinguish from pneumonia or even lung cancer—the fungal masses in patients’ lungs look almost identical to tumors, says Dr. Michael Peterson, chief of medicine at UCSF-Fresno. If doctors suspect valley fever, they can order a blood or sputum (phlegm) test, but outside of the endemic areas many doctors aren’t familiar with the disease. That makes it particularly hard for people who contract the disease while traveling to the southwest to get appropriate care. One small company manufactures a simple and quick skin test, but it’s not widely available yet since the company says it can’t afford the FDA’s marketing fee; Rep. Kevin McCarthy (R-Calif.), who recently formed a valley fever task force, says he plans to petition the FDA to waive the fee.

Which states have the most cases of valley fever? In general, southwestern states: 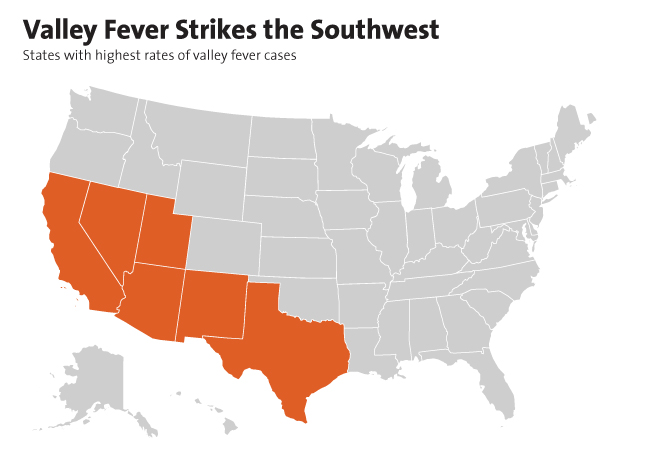 How common is it? Increasingly common: 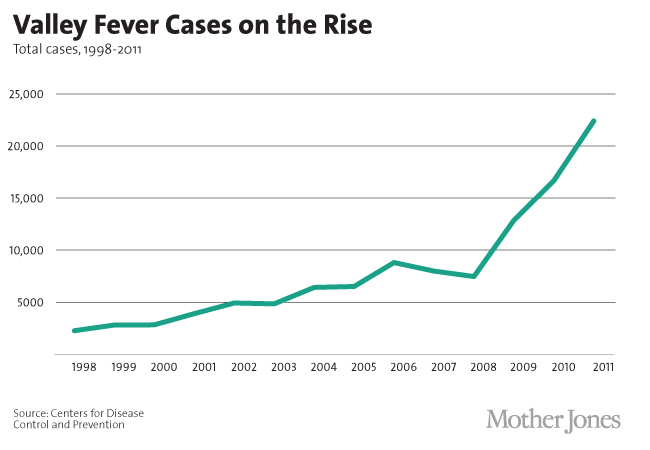 Why is valley fever increasing so quickly? One theory is that climate change is playing a role: As the weather gets hotter and drier, soil gets dustier—which means it’s easier for people and animals to breathe in the fungus. Some people believe that the rise is related to the population boom in the Southwest: The increase in cases has occurred in the last decade, during which time millions of people have flocked to that part of the country. Not only are there more people to get sick, there’s also more construction, meaning that workers are moving around the previously undisturbed soil where valley fever spores seem to thrive. Antje Lauer, a microbiologist at California State University-Bakersfield, theorizes that the spores might do especially well in burrows where rodents have stored seeds.

Basically all of my fruits and vegetables are grown in California’s Central Valley. Am I going to get valley fever from my next salad? Probably not. Valley fever spores seem to prefer soil that hasn’t been cultivated, explains Lauer. She theorizes “that in agricultural soils, where there is a lot of additional organic matter from manure or scientific chemical or fertilizer being put into the soil, that the diversity of microorganisms goes up, because the diversity of certain nutrients goes up, and then valley fever fungus can’t compete any more.”

What can be done to prevent valley fever? The short answer: If you live in the Southwest, not much. People who work outdoors can wear special masks to limit their exposures, but for the rest of the population, it’s hard to avoid. As UCSF-Fresno’s Peterson put it, “The only thing you can really do is in days where there are windstorms, there’s lots of dust in the air—do not go out and do heavy exertion, those kinds of things. Otherwise, it’s in the air.”

Where can I learn more about valley fever? The Reporting on Health Collaborative has a great valley fever series about the communities that have been hardest hit by the disease; the CDC has up-to-date information on incidence, risk factors, diagnosis, and treatment.