The other day I found an old T-shirt that had been sucked into the vortex under my bed. When I pulled it out, it was covered with dust bunnies. I grimaced, picked them off, deposited them into the trash, and didn’t give them another thought.

That is, until I read a new report about the hormone-disrupting chemicals lurking in those dust bunnies—and in a whole host of other harmless-seeming things in my house. The Environmental Working Group along with the Keep-A-Breast Foundation just released the Dirty Dozen Endocrine Disruptors list of chemicals that can seriously mess with your hormones, potentially leading to various cancers, growth and reproductive issues, metabolic malfunctioning, and many more health problems.

So I set out to identify some the items in my apartment that might be making my hormones go haywire. Here are just a few of the things that I found: 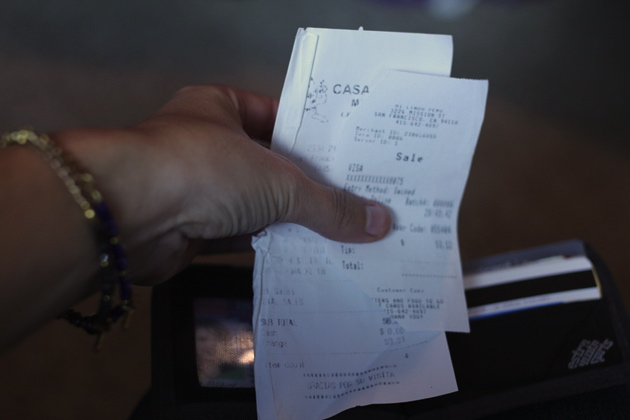 I started by inspecting my wallet. According to the report, the thermal paper on which receipts are commonly printed contains BPA—a chemical found in certain plastics—which is known to imitate estrogen. BPA has been linked to breast cancer, reproductive problems, obesity, heart disease and has even been blamed for sparking early onset puberty. 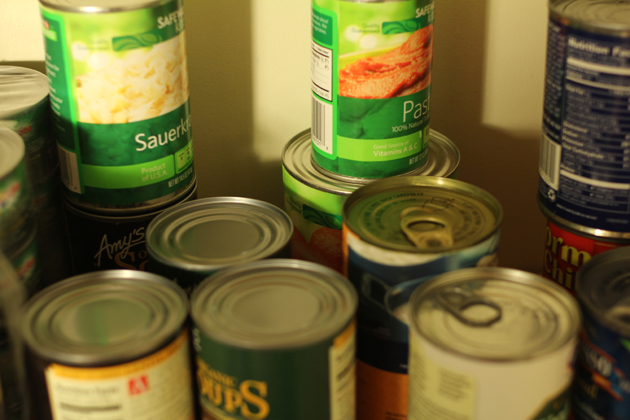 I next wandered into the kitchen, tummy rumbling. First I glanced into the pantry, where I saw cans of chili, soup, beans, tuna, and even sauerkraut. Like the receipts, many cans are lined with BPA, EWG warns. 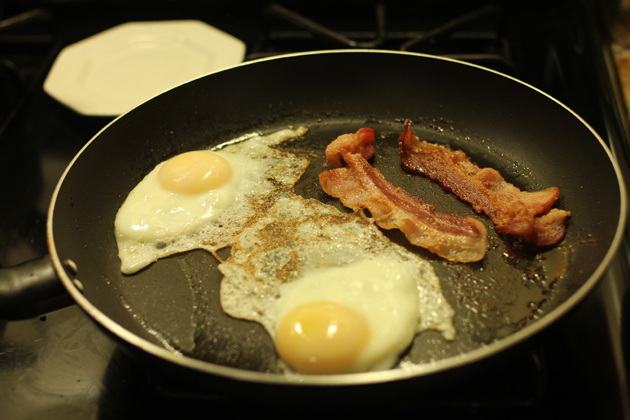 With some hesitation, I next opened the fridge. From the mercury-laden fish in the freezer to the phthalates in the plastic containers storing leftovers, nearly everything in there was at some risk of contamination with hormone-altering chemicals, according to the report. Dioxin, a hormone disruptor produced during industrial processes, has tainted much of the American food supply. Exposure to low levels of the chemical in the womb and early life can permanently affect men’s sperm quality and count. Dioxins are also considered powerful carcinogens. They are extremely hard to avoid if you’re an omnivore like me, since dioxins lurk in many animal products including meat, fish, eggs, and dairy.

My favorite breakfast seemed a lot less appetizing when I learned that the non-stick pan I use likely contains perflourinated chemicals, another endocrine disruptor known to lead to high cholesterol among other things. 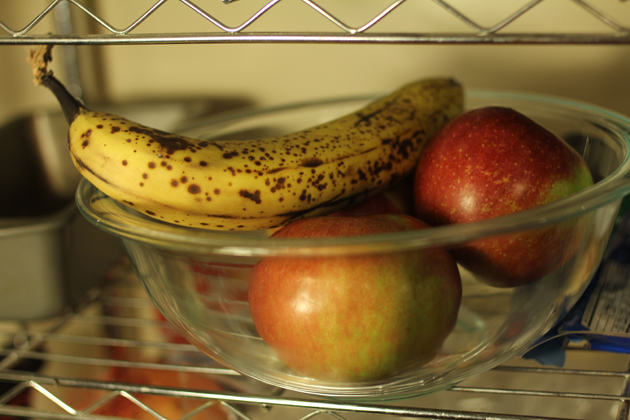 So maybe I’ll skip the meat products today and have some healthy fruit instead. Not so fast, says EWG: The fruit may be coated with pesticides. In fact apples topped the EWG’s other dirty dozen list of produce most likely to be exposed to pesticides. Those could include organophosphates, chemicals that don’t biodegrade. Exposure to them can negatively effect brain development, behavior, and fertility. Another pesticide, atrazine, may also be present. One of the most commonly used herbicides in the United States, the chemical made a splash a few years ago when scientists observed it turning male frogs into females. It’s been linked to breast tumors, delayed puberty and prostate inflammation in animals. 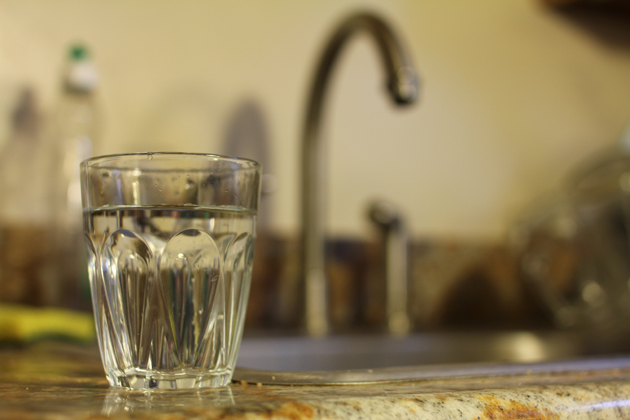 I head to the sink to draw a glass of water. But EWG says my water could contain atrazine contamination from runoff in croplands, along with traces of perchlorate, lead, and arsenic. Perchlorate, a component of rocket fuel, can alter the thyroid gland which regulates metabolism and brain and organ development. Arsenic is a powerful poison that in trace amounts can disrupt the glucocorticoid system, which can lead to weight loss or gain, immunosuppression, insulin resistance, osteoporosis, and high blood pressure. And lead, as you probably have heard, is just the worst. 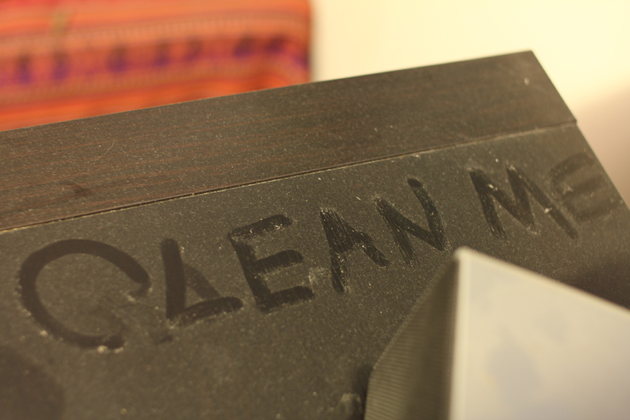 In the living room, I found the TV stand coated with dust bunnies like the ones I found under my bed—not ideal, since polybrominated diphenyl ethers could be clinging to the dust particles. PBDEs, the chemical in fire retardants, are known to mimic thyroid hormones and can lead to lower IQ among other health effects. The EWG (and my parents) advise keeping the house spick and span. 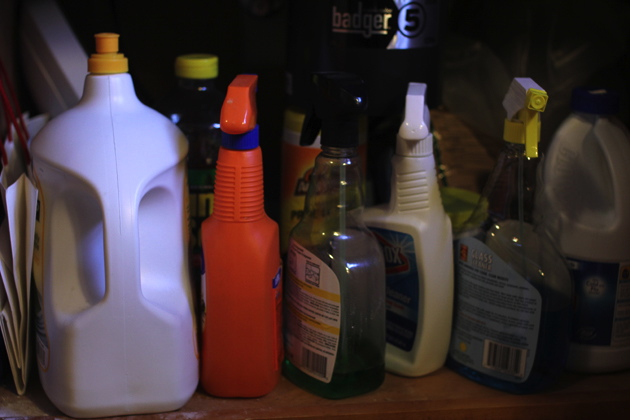 Under the sink is a stockpile of cleaning products. I pick out a blue-tinted all-purpose cleaner and check the label. One of the ingredients is 2-butoxyethanol (EGBE), a glycol ether linked to severe reproductive problems: Guys, think shrunken testicles. Glycol ethers are also found in paints, brake fluid, and cosmetics. 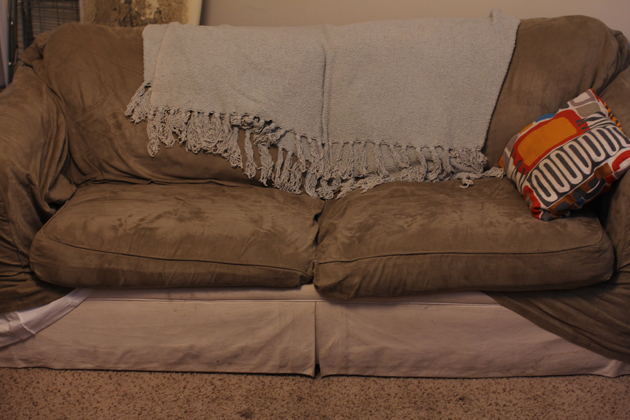 OK, I’m done. There are hormone altering toxins in my food, in the dust in the house, and in the products I use to clean. I sit down on the couch and feel defeated. Then I remember that the foam in the cushions is also likely filled with fire retardants. And I’m forced to face the facts: My once cozy, safe home is a veritable mine field of endocrine disruptors. Short of moving to the wilderness, how can I keep my hormones safe? It would be difficult to avoid all of the chemicals the EWG names, but luckily the group does have a few practical resources; for starters I’ll be perusing the guide to healthy cleaning, advice on finding a good water filter, and a safe cosmetics database.