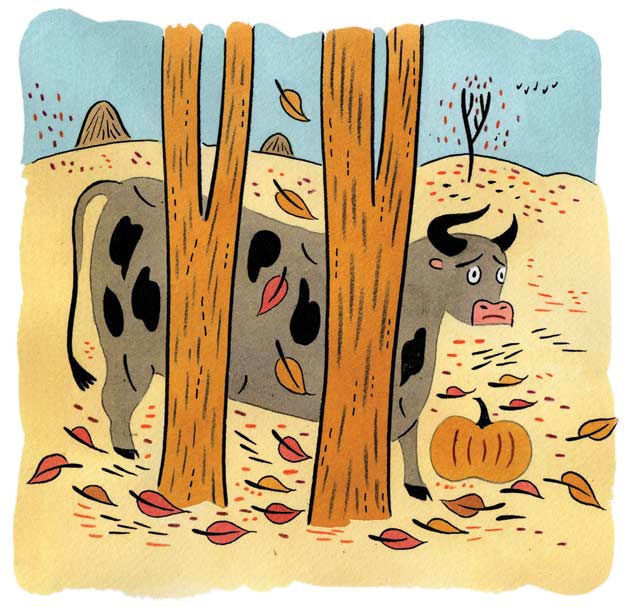 It’s almost time to bid farewell to tomatoes. The stiff, tasteless orbs found in even California supermarkets come winter don’t do the fruit justice, so I’ll gorge myself now and then settle in for eight months of canned goods. But it’s not just produce that’s best at a seasonal peak: Farm animals also respond to temperature and light. In fact, some food experts believe that we should wait for the right season to eat fresh meat.

This isn’t exactly a new idea. Cultures throughout history have slaughtered animals at certain times of year, and many of our traditional holiday meals—think Thanksgiving turkey and Easter ham—came from this practice. Steak also was once an autumn delicacy: After the first frost, ranchers would flood the market with steers fattened on summer’s pastures. But that changed after World War II, when farmers—buoyed by a large new trove of government-subsidized corn and soy—found profit in confining cattle and selling meat year-round, and most turned to “finishing” cattle on grain, breaking beef’s tie to grass growth cycles. The tender meat produced this way made “corn-fed” a compliment, but by now the downsides have also become apparent: Today upwards of 97 percent of US beef is grain-fed, and livestock consume more than 50 percent of the corn produced in the United States, requiring a system of massive monoculture, heavy pesticide applications, and overtilled soils. On the other hand, well-managed permanent pasture, where grasses are dense and root systems maintained, can improve the soil, prevent erosion, and sequester carbon.

Wild turkeys feast on abundant grass and bugs in the summer. Shorter days in the fall affect their hormones, causing them to retain more fat in anticipation of winter.

So lately, grass-fed meat has been enjoying a renaissance among both foodies and ranchers, with everyone from Whole Foods to fast-food chain Elevation Burger peddling pastured beef and lamb. But there’s a catch: In order to sell their product all year long, farmers finish their grass-fed animals with hay and dry forage in the winter months. Those stored feeds are lower in fatty acids and precursors for antioxidants such as omega-3s—which make grass-fed beef healthier in the first place, says Cynthia Daley, an agriculture professor at California State University-Chico. “To optimize these antioxidants,” she says, “cattle need to be finished off grass.”

That’s why Bill Niman, the founder and former CEO of Niman Ranch, sells his pasture-finished Black Angus beef only from early summer to fall—to take advantage of prime Northern California grazing time, which begins in spring. (The timing would be different in other climates; in Vermont, where grass remains lush through the summer, the meat would be best later.) Chefs at premier restaurants—like California’s Chez Panisse and New York’s Blue Hill—say Niman’s rich steaks are worth the wait.

Even nongrazing animals traditionally were prepared at particular times: Farmers slaughtered hogs in the fall, after the barrows had gorged on acorns. Sausages were made when workers were finished in the fields and had time to help in the packing houses. Hams were cured all winter and ready in time for Easter. Meat birds also have a prime season: Turkeys that are allowed to forage outdoors feast on abundant grass and bugs in the summer. Shorter days in the fall affect their hormones, causing them to retain more fat in anticipation of winter. “There’s a reason why turkey was the Thanksgiving bird,” says Kansas heritage turkey farmer Frank Reese. “That’s when it was ready.”

But buying seasonal meat at its peak isn’t cheap. Niman’s ribeyes, sold as BN Beef, ring in at $21.99 a pound at one San Francisco market, compared to around $12.50 per pound for the average boneless ribeye. Frank Reese’s heritage turkeys cost around $9.50 a pound; supermarket turkeys go for $1.68 per pound. “Grass-fed costs a lot more because it costs the rancher a lot more to make it,” says University of California-Davis livestock specialist Jim Oltjen. And the consolidation of slaughterhouses hasn’t made it easier for ranchers trying to buck the system: A lot of them would prefer to process meat seasonally, but industrial abattoirs run year-round, and they don’t let ranchers choose when to bring their animals in. One recent University of California study found that small-scale beef ranchers in California’s Mendocino County were “hampered by significant scheduling problems” at the few USDA-certified slaughterhouses in the area.

Consumer demand could help tip the scales in favor of these small farmers. “We started with a very small group of people who cared about the seasonality of tomatoes, and that group has grown,” says Maisie Greenawalt, a strategist for a large sustainable-food-focused catering company. Seasonal seafood is gaining popularity too, she says—eating wild salmon only during the summer run, for example. “There’s a possibility for meat to follow that same pattern.”

And what happens in February when you’re hankering for a burger? “The great thing about meat is you can freeze it,” Oltjen says. “It does fine.” So if you’re one of the growing number of omnivores adding pasture-raised meat to your diet, it might be time to invest in a chest freezer—or kiss that cheeseburger goodbye for a few months.