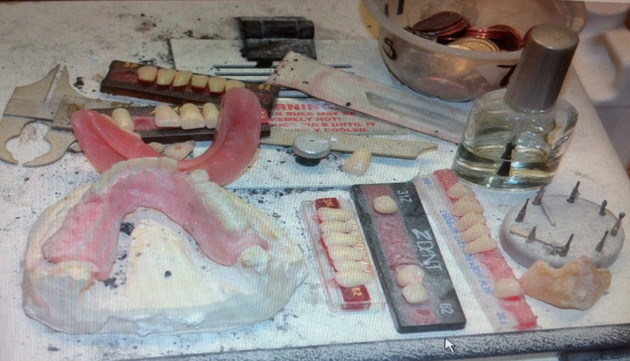 Earlier this month, the ABC News affiliate in Columbus, Ohio, aired a strange story: Police in Springfield had received a call-in report that a man was standing on a street corner and “shooting a gun off all day.” After a five-hour standoff, they arrested the man and searched his house. They found guns, knives, swords, and in the basement, hot plates, pots and pans, and boxes of teeth. Perplexed, they investigated further and discovered that the man’s brother had been running a dental lab out of the home for about a year, supplying devices such as dentures to local dentists’ offices. The photos of the basement lab are sickening: paint peeling off the walls, dust everywhere, lots of clutter. Not exactly the kind of pristine environment you’d imagine for the manufacture of something that goes in your mouth. 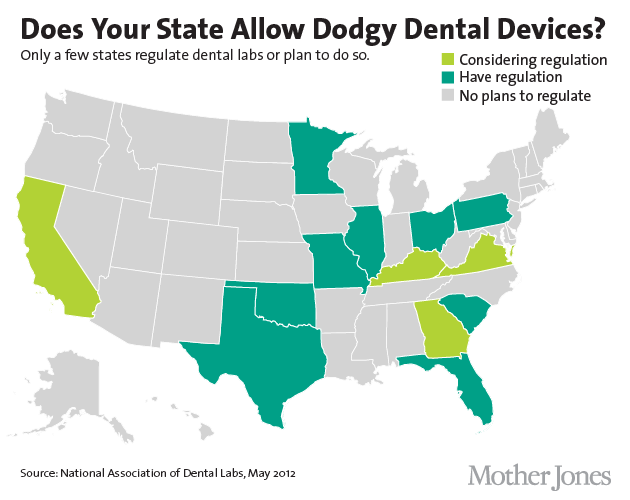 While there are roughly 10,000 dental labs in the United States, the FDA has inspected just 146 over the last decade.

Amazingly, the scuzzy basement lab was completely legal. In fact, I, Kiera Butler, could go home tonight and start making dentures in my basement and selling them to dentists. Ohio is one of many states where dental labs and their employees—who produce crowns, night guards, dentures, and your kids’ braces and retainers—don’t have to be trained, licensed, or certified in any way. Heck, they don’t even have to register with the state health department. While Ohio at least asks dental labs to disclose to clients what their products are made of and where they come from, most states have no such requirement. (You can check out the rules for individual states here.)

Is your dentist even aware of this? Perhaps not. In a 2008 survey by the American Dental Association, fewer than half of dentists knew whether their state regulates these labs, and 86 percent couldn’t say whether the federal government does. As it turns out, the manufacturers of many common dental devices are actually exempt from federal rules that medical-device makers have to follow. The FDA “handles questions associated with these dental-device exemptions on a case-by-case basis,” explains David Gartner, who heads the regulatory policy division of the agency’s Center for Devices and Radiological Health.

The National Association of Dental Labs (NADL) estimates that Americans spend around $7 billion on dental devices annually, and that there are some 10,000 dental labs in the United States. But the FDA has inspected only 146 of them during the last decade. Because most don’t have to register, state and federal authorities have no real record of their existence.

The Ohio man with the filthy basement dental lab got certified in prison—which makes him more qualified than the law requires.

Domestic dental labs get a good portion of their devices (about 38 percent, the NADL estimates) from thousands of overseas labs, which are supposed to register with the FDA. But the agency has inspected only 113 of those labs in the last decade—even after lead was found in some imported Chinese crowns in 2008.

So are these unregulated devices creating problems for patients? Hard to say, says Eric Thorn, the NADL’s chief staff executive. “In the vast majority of these occurrences the patient would report it to their dentist and their dentist would address the issue,” he says. Dentists are not required to file official reports of most problems with appliances.

The ABC reporters asked the Springfield man whether he had any training as a dental lab technician, and it turned out he did: He got certified in prison—which actually makes him more qualified than the law requires.

Both NADL and the American Dental Association are urging states to require dental labs to register. That way, at least authorities will be able to track them. “It’s really important that these devices get made in clean, hygienic labs, and that states require those labs to be registered,” says Bennett Napier, NADL’s executive director. “Otherwise, patients have no way of knowing their devices are made under acceptable conditions.”

Here are a few more pictures that the Springfield, Ohio, police took of the basement dental lab: