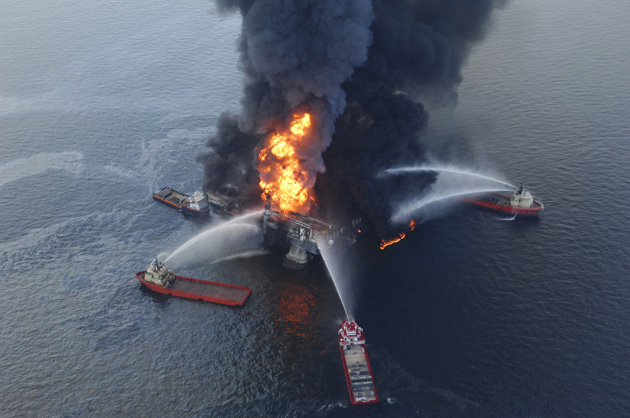 More than three-and-half years after the Deepwater Horizon disaster spewed millions of gallons of petroleum into the Gulf of Mexico, scientists are launching drones and ocean-going sensor arrays off the Florida coast in an effort to map the path of future oil spills before they devastate beaches and coastal ecosystems.

Researchers from the University of Miami and other scientists are placing 200 GPS-equipped “drifters” in the surf zone just off Fort Walton to map where the ocean currents take the devices. Sensors placed on the ocean surface and seabed will track the movement of colored dye that will be released during the three-week experiment that began today. Two drones outfitted with GoPro cameras will also monitor where the currents take the drifters and dye. Since the drones can only stay aloft for an hour at a time, a camera-carrying kite will also be deployed.

All the data collected will be used to construct a computer model of near-shore ocean currents to predict how future oil spills or other pollutants will disperse as the approach the shore.

“Computer models will be able to give us better estimates of where the oil spill will go, and how fast and in which patterns it will spread,” Tamay Özgökmen, a University of Miami professor and the director of the Consortium for Advanced Research on Transport of Hydrocarbons in the Environment, told The Atlantic in an email. “This can help emergency responders to better direct their limited resources. In the longer term, models are also helpful to make sense of any ecological damage that may have occurred in the environment.”

For instance, that model can also predict where currents will carry shrimp larvae—crucial information given the importance of fishing to the Gulf Coast economy.

The Surfzone Coastal Oil Pathways Experiment is part of a larger $500 million effort funded in part by oil giant BP in the wake of the Deepwater Horizon catastrophe. Depending on the strength of the currents, the drifters and drones will be deployed over an area that could stretch from hundreds of square yards to many square miles, according to Özgökmen.