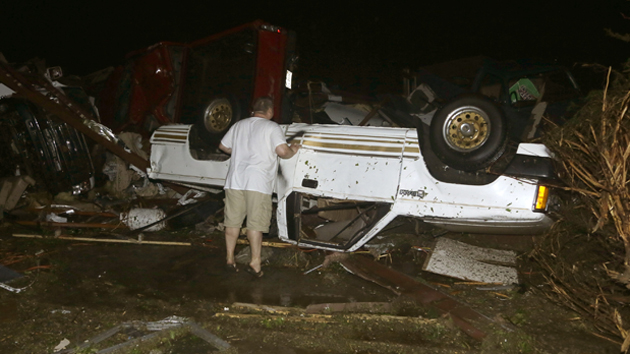 An automobile dealer surveys the tornado damage to one of his trucks in Mayflower, Arkansas, on Sunday.Danny Johnston/AP Photo

After a remarkably quiet start, the US tornado season exploded into action over the weekend, as a battery of tornadoes in Arkansas, Iowa, and Oklahoma killed 16 people. The Arkansas towns of Mayflower and Vilona were particularly devastated. Based on preliminary assessments, some of the twisters may have reached EF-3 or stronger on the Enhanced Fujita scale, meaning that they had wind gusts of more than 136 miles per hour.

It all amounts to quite the burst of weather whiplash. Just days ago, after all, USA Today could be found calling 2014 the “safest start to tornado season in a century.” April 2014 was certainly looking nothing like April 2011, which featured a staggering 753 tornadoes in the United States, a new all-time record. So what’s up with this sharp variation in the behavior of tornadoes, these extraordinarily powerful storms that afflict the US more than any other part of the world? And could global warming have something to do with the matter?

Until pretty recently, scientists really felt that they couldn’t say much about that question. “The issue of global warming and severe thunderstorms [which often result in tornadoes] has been an outstanding challenge for the scientific community,” explains Noah Diffenbaugh, an Earth scientist at Stanford University who has focused on the question. For instance, a recent consensus report on extreme storms and climate change, published early last year in the Bulletin of the American Meteorological Society, found that there was “little confidence” of any trend in tornado occurrence, and also concluded that there were no clear changes in the environments in which these storms form.

Conditions favorable to tornadoes may increase with global warming, says one new study.

In recent months, though, this consensus—that we really don’t know what’s happening with global warming and tornadoes—has been challenged by some interesting new research. To understand why, it helps to first grasp some basics on how tornadoes form, a crucial first step toward determining whether global warming may change them.

Tornadoes emerge in some, but not all, severe thunderstorms, powerful explosions of atmospheric energy that also frequently feature lightning, hail, strong winds, and intense rainfall. Scientific research has determined that while a variety of environmental and atmospheric conditions support severe thunderstorm development, two in particular are crucial. The first is that there have to be high levels of so-called “convective available potential energy,” or CAPE, which denotes the instability of the atmosphere, and thus how friendly it is to thunderstorm updrafts. The second condition is that there must be strong wind shear, defined as the difference in speed or direction of winds as one ascends from the surface higher into the atmosphere.

Based on this knowledge, researchers have turned to global climate models in order to predict how global warming could change the relationship between CAPE and shear in the the future. And for a long time, the two factors were basically expected to offset each other. Or as National Oceanic and Atmospheric Administration (NOAA) tornado researcher Harold Brooks put it in a 2013 paper summarizing the consensus: “Climate model simulations suggest that CAPE will increase in the future and the wind shear will decrease.” So even though higher overall heat might lead to the potential for more explosive storms, the expected decrease in shear meant that potential might not get realized. In other words, it was basically looking like a wash. 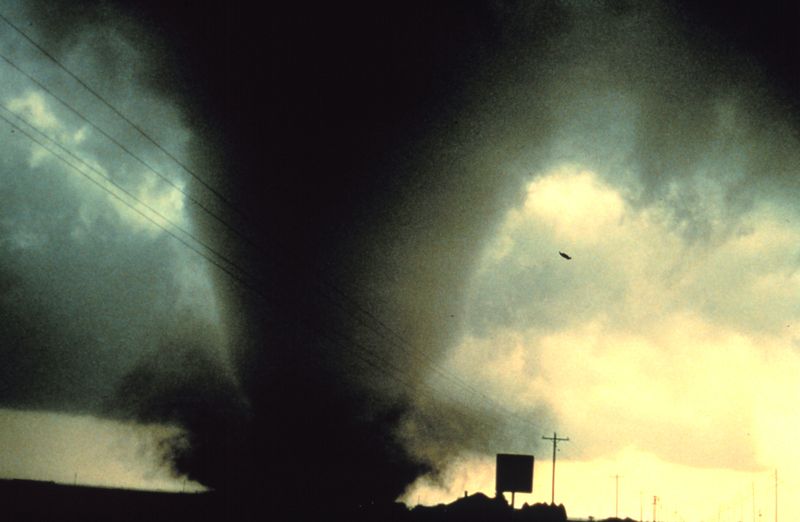 The environments in which tornadoes form are changing, according to the latest research. NOAA/Wikimedia Commons

That conclusion fell into question late last year, though, with a paper by Diffenbaugh and two colleagues in the Proceedings of the National Academy of Sciences. Using a suite of the most state-of-the-art climate models, the researchers found, once again, that wind shear decreases under global warming. However, they also found that that didn’t really matter, because the number of days with both high CAPE and high shear nonetheless increased. “We find that in fact, at the monthly or seasonal scale, that decrease [in shear] does occur over the US,” Diffenbaugh says, “but it’s concentrated in these days with very low CAPE.” That means that the net number of days with high CAPE and high shear was still projected to increase in the future.

That means more favorable environments for severe thunderstorms in general, but what about the subset of those storms that produce tornadoes? For tornado occurrence, Diffenbaugh explains, wind shear very close to the surface appears to be particularly important. In their new modeling study, Diffenbaugh and his colleagues looked at this parameter too, and they found an “increase in the fraction of severe thunderstorm environments that have high CAPE and high low-level shear,” as Diffenbaugh puts it. As the authors wrote, this result is suggestive “of a possible increase in the number of days supportive of tornadic storms.”

The paper by Diffenbaugh and his colleagues represents “the first significant evidence that we might expect to see a change in tornadoes,” says NOAA’s Brooks.

Meanwhile, Brooks thinks he might have found a trend in a different area: actual tornado statistics.

In general, the scientific consensus has been that our tornado data just isn’t good enough to support the idea of any clear, historic trend in tornadic activity. But in his latest research, Brooks thinks he has detected a “pretty strong signal that there’s been an increase in the variability of tornado occurrence on a national scale.” What does that mean? Basically, an increase in erratic behavior: periods with little or no activity, followed by intense bursts of activity.

As noted above, recent tornado behavior has certainly seemed pretty up and down. According to Brooks, in recent years we’ve seen records for the most tornadoes ever in a 12-month period, as well as for the fewest in a 12-month period. And Brooks says we are also seeing increasing variability in terms of when the tornado season actually starts. (Note: The relationship between Diffenbaugh’s research, and Brooks’ new finding, isn’t clear at this point.)

In summary, then, it would be very premature to say that scientists know precisely what will happen to tornadoes as global warming progresses. However, they have come up with some interesting new results, which point to potentially alarming changes. More generally, the upshot of this research is that tornadoes must change as a result of climate change, because the environments in which they form are changing.