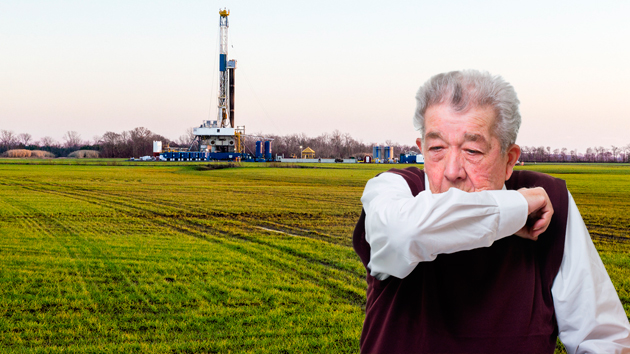 If you know one thing about fracking, it might be that the wells have been linked to explosive tap water. Of course, a tendency toward combustion isn’t the biggest problem with gas-infused water; it’s what could happen to you when you drink it.

Although the natural gas industry is notoriously tight-lipped about the ingredients of the chemical cocktails that get pumped down into wells, by now it’s widely known that the list often includes some pretty scary, dangerous stuff, including hydrochloric acid and ethylene glycol (a.k.a. antifreeze). It’s also no secret that well sites release hazardous gases like methane and benzene (a carcinogen) into the atmosphere.

So just how dangerous are fracking and other natural gas extraction processes for your health (not counting, for the sake of argument, explosions and earthquakes)? Is it true, as an activist-art campaign by Yoko Ono recently posited, that “fracking kills”?

The answer to that second question is probably not, especially in the short term and if you don’t work on or live across the street from a frack site (which, of course, some people in fact do). But that doesn’t mean it’s okay to start fracking away next to kindergartens and nursing homes: Gas extraction produces a range of potentially health-endangering pollutants at nearly every stage of the process, according to a new paper by the California nonprofit Physicians Scientists & Engineers for Healthy Energy, released today in Environmental Health Perspectives, a peer-reviewed journal published by the National Institutes of Health.

“We can conclude that this process has not been shown to be safe,” the study’s author said.

The study compiled existing, peer-reviewed literature on the health risks of shale gas drilling and found that leaks, poor wastewater management, and air emissions have released harmful chemicals into the air and water around fracking sites nationwide.

“It’s clear that the closer you are, the more elevated your risk,” said lead author Seth Shonkoff, a visiting public health scholar at the University of California-Berkeley. “We can conclude that this process has not been shown to be safe.”

Shonkoff cautioned that existing research has focused on cataloging risks, rather than linking specific instances of disease to particular drilling operations—primarily because the fracking boom is so new that long-term studies of, say, cancer rates, simply haven’t been done. But as the United States and the world double down on natural gas as a cleaner alternative to coal (as this week’s UN climate change solutions report suggests), Shonkoff argues policymakers need to be aware of what a slew of fracked wells could mean for the health of those who live near them.

Even given the risks involved in producing natural gas, it’s still a much healthier fuel source than coal; particulate pollution from coal plants killed an estimated 13,000 Americans in 2010, while a recent World Health Organization study named air pollution (to which coal burning is a chief contributor) the single deadliest environmental hazard on earth.

Still, how exactly could gas drilling make you ill? Let us count the ways:

Air pollution near wells: Near gas wells, studies have found both carcinogenic and other hazardous air pollutants in concentrations above EPA guidelines, with the pollution at its worst within a half-mile radius of the well. In one Colorado study, some of the airborne pollutants were endocrine disrupters, which screw with fetal and early childhood development. Several studies also found precursors to ground-level ozone, which can cause respiratory and cardiovascular disease. Silica sand, which is used to prop open underground cracks and which can cause pulmonary disease and lung cancer, was also found in the air around well sites; one study of 111 well samples found silica concentrations in excess of OSHA guidelines at 51.4 percent of them.

Recycled frack water: About a third of the water/chemical/sand mixture that gets pumped into wells flows back up, bringing back not just the toxic fracking chemicals but other goodies from deep underground, including heavy metals like lead and arsenic. Some of this wastewater is treated and recycled for irrigation and agriculture or dumped back into lakes and rivers. Multiple studies found that because the menu of chemicals is so diverse, treatment is often incomplete and has the potential to pollute drinking water supplies with chemicals linked to everything from eye irritation to nervous system damage to cancer, as well as the potential to poison fish. Even if wastewater is contained, spills can be a problem: One Colorado study counted 77 fracking wastewater spills that impacted groundwater supplies, of which 90 percent were contaminated with unsafe levels of benzene.

Broken wells: Drinking water supplies can also be contaminated when the cement casings around wells crack and leak, which studies estimate to happen in anywhere from 2 to 50 percent of all wells (including oil wells, offshore rigs, etc.). Methane getting into drinking water wells from leaky gas wells is the prime suspect in Pennsylvania’s flammable faucets; a study there last year found some methane in 82 percent of water wells sampled but concluded that concentrations were six times higher for water wells within one kilometer of a fracking well. A Texas study found elevated levels of arsenic at water wells within three kilometers of gas wells. (While the Texas study linked the contamination to gas extraction in general, it was unclear what specific part of the process was responsible).

Many of these issues could be improved with engineering advancements, like gadgets that monitor for leaks and capture gas emissions, or hardier cement. Regulation can also play a role: Just yesterday, the EPA released a series of reports on methane emissions that could eventually inform restrictions on them as part of President Obama’s climate plan.