For a brief moment in Darren Aronofsky’s hit religious epic film Noah, we see the great Flood from space. From that vantage point, it looks much like an atmospheric event of the sort that a NASA satellite might photograph, so we can all share it on Facebook. So what does biblical cataclysm look like from orbit? Beautifully, and yet terrifyingly, the entire Earth appears to be draped in a quilt of hurricanes, each cyclone nestled alongside the next.

“There is a huge statement in the film, a strong message about the coming flood from global warming,” Aronofsky told The New Yorker in an extensive profile. The film also contains a depiction of the Big Bang (something doubted by 51 percent of Americans, according to a recent survey), fins-to-limbs evolution, and the very clear implication that the biblical “days” of the creation were only metaphorical days, not literal, 24-hour ones.

“Noah” and the Nexus of Faith and Environmentalism

RSVP here (space is extremely limited); a live web stream will be available here on the day of the event.

In other words, you might say Noah is waving the red cape in front of fundamentalist Christianity. No wonder, as Mother Jones‘ Asawin Suebsaeng puts it, the film has inspired a “flood of religious freak-outs.”

But the freak-outs shouldn’t get all the attention: No matter what the Christian right may say, Noah is a deeply religious and spiritual film containing an authentic moral message. And that message feeds strongly into a vital and growing religious tradition of our time, one that especially appeals to younger believers: faith-based environmentalism, or what is sometimes called “creation care,” which uses biblically based moral imperatives to impel conservation and stewardship. (Aronofsky and his Noah cowriter Ari Handel will be attending an event later today at the Center for American Progress to discuss just this aspect of the film; details at right. You can watch a live stream right here beginning at 3 p.m. EDT today.)

Certainly, you couldn’t fairly call Noah an irreligious movie. Aronofsky himself, whose notable past films include The Wrestler and Black Swan, is a “not very religious” Jew who has said of his spirituality, “I think it’s always changing. I think I definitely believe.” 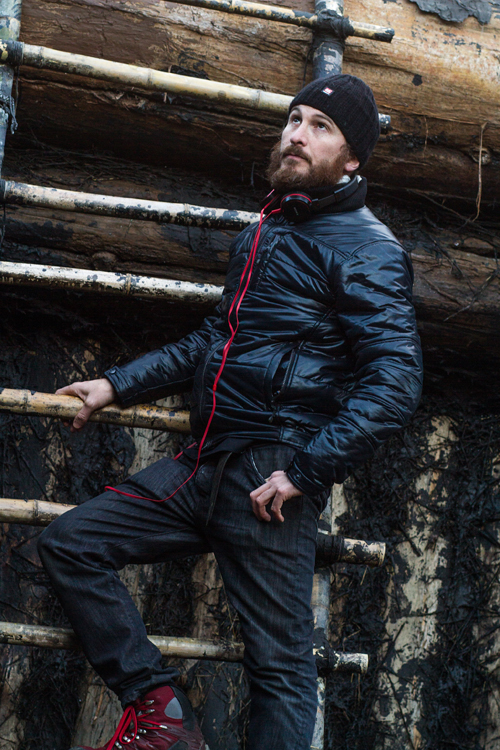 Darren Aronofsky on the set of Noah Niko Tavernise/Paramount

As for the film itself: Aronofsky and Handel relied heavily on not just the text of the Bible (where the story of Noah encompasses roughly four chapters of the book of Genesis), but also Jewish Midrash, ancient explications of religious texts. The result is creative, sometimes idiosyncratic, heavily influenced by Jewish theology, and above all, deeply environmental. In other words, it’s a film that may tick off people who are very rigid in their biblical literalism, but for other believers, it’s an environmental epic that can be resonant indeed.

Whose “dominion”?
Aronofsky has called Noah the “first environmentalist.” The film goes further: It actively interprets the Bible in favor of those who argue that the book of Genesis requires us all to be good “stewards” of the creation—and in strong opposition to those who read its language about mankind having “dominion…over all the earth, and over every creeping thing” as mainly implying that all this exists for us. (Who holds such a view? Well, here’s Rick Santorum: “Man is here to use the resources, and use them wisely, to care for the Earth, to be a steward the Earth, but we’re not here to serve the Earth, the Earth is not the objective. Man is the objective.”)

Noah tells us, bluntly, that that’s what the bad guys think. Those bad guys in the film are led by a figure named Tubal-Cain (Ray Winstone), who very early on declares, “Damned if I don’t take what I want.” Tubal-Cain represents the line of Cain (Adam’s son, who killed his brother Abel) and thus embodies the biblical “wickedness” of mankind just before the Flood; in the film, that wickedness is embodied, in Tolkienlike fashion, as industrialization, environmental despoilment, and pollution. And most of all, the killing and eating of animals: We see Tubal-Cain and his followers do this repeatedly throughout the film.

In the film, Tubal-Cain’s interpretation of dominion is “more of a conquest, take whatever you need for your own pleasure,” explains David Jenkins, an evangelical Christian and the president of Conservatives for Responsible Stewardship, a group that believes that “the true conservative will be a good steward of the natural systems and resources that sustain life on earth.”

“And that sometimes is the way that people seem to have interpreted the word ‘dominion,’ when actually, if you go back to the Hebrew language, and you understand that in its true context, dominion is basically ‘authority,'” continues Jenkins. “And with any kind of authority…it comes with great responsibility and a sense of stewardship and caring.”

Noah, by contrast, represents the line of Seth (another of Adam’s sons), and their clan’s approach to the environment is vastly different. The key word, as Noah’s father, Lamech, puts it, is “responsibility.” Noah passes that message on to his son Ham: “All of these innocent creatures are in our care,” he tells the boy after Ham wrongly picks a flower. “It’s our job to look after them.” 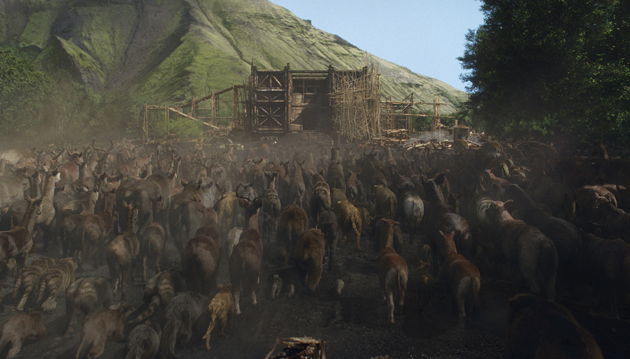 Animals herd onto the Ark in Noah. Niko Tavernise/Paramount

Later in the film, in a rather disturbing psychological plot twist, Russell Crowe’s Noah becomes so appalled at the evils of men (after watching a hungry mob tear apart an animal and devour it) that he wrongly interprets God’s will to be that mankind should go extinct, leaving only the “innocent” animals on Earth. This leads to plenty of drama, including Noah briefly threatening to kill his own granddaughters because they might some day bear children and lead to a continuance of humanity. But he isn’t actually up to it, and neither is the film. Noah isn’t anti-human; it’s just very strongly in favor of the idea that humans have serious environmental responsibilities, and that the Bible itself tells them so.

The film thus represents pretty strong reinforcement for a social movement that has gathered increasing momentum in the past half decade or more: the “creation care” movement. For just as the film Noah does, followers of this movement interpret the Bible’s language about “dominion” not to mean domination or simple mastery, but rather, to imply responsibility and the need for environmental stewardship.

One reason this movement has drawn such attention is that in addition to its obvious mainline religious appeal, it seems able to inspire at least some evangelical Christians to go against our expectations about the Christian right, and support solutions to global warming. “I think that’s part of the interest—it’s not part of the evangelical stereotype,” says Katharine Wilkinson, author of the book Between God and Green: How Evangelicals Are Cultivating a Middle Ground on Climate Change.

Granted, the majority of that demographic group remains in denial about climate change. According to a 2013 study of evangelicals’ climate views published in the journal Global Environmental Change, evangelicals were less likely than average Americans to think global warming is happening, to believe that it is caused by humans, and to believe that most scientists think it is happening. Consider: 64 percent of nonevangelicals, but only 44 percent of evangelicals, agree that climate change is “caused mostly by human activities.”

Evangelicals are diverse, however: Those who are female, more egalitarian, and overall less conservative in their values are much more likely to believe climate change is real and to want to do something about it, the study found. And as Wilkinson emphasizes, young evangelicals are particularly likely to accept climate change. “You see kind of a gap between evangelicals and the average American, in terms of their belief [in global warming],” she says, “but you see that gap basically disappear with evangelicals under 30. They don’t look any different from other young Americans.”

Overall, then, you might say that a large and growing minority of evangelicals seem very open to messages about why it is their biblical responsibility to take care of the creation, and also willing to apply this view to the climate issue specifically. “I see more and more evangelicals engaged when we talk about creation care,” says the Reverend Mitchell Hescox, president of the Evangelical Environmental Network. “We’ve gone from 15,000 email people to a quarter of a million people who regularly read our messages.” 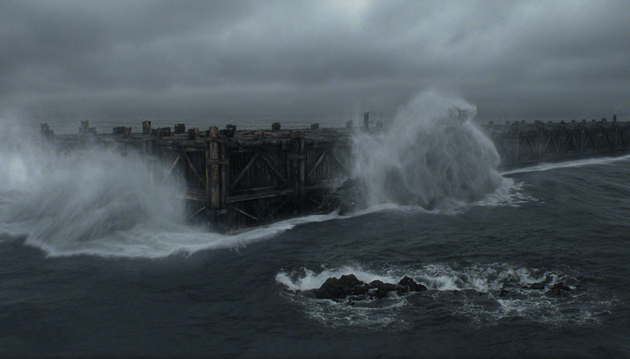 So how will the film speak to this audience? Hescox is skeptical, worrying that “the message of caring for God’s creation got lost in the discussion over the literary license that was taken in creating and producing the story for the film.”

David Jenkins of Conservatives for Responsible Stewardship feels differently, however, arguing that the film is “perfectly consistent with the biblical account.”

“That’s the great thing about a movie as a vehicle, for that two hours, you’ve got them sitting there and that’s what they’re engrossed in, no outside influences come in and influence anything,” says Jenkins. “So I think it’s reasonable to assume that if something is well done and it’s consistent with Scripture, it will have an impact.”

And once again, that will probably be most true of the young evangelicals, a large number of whom will surely see the film. “Young people especially, I think, young people don’t have the same commitment to dogma, or biblical literalism that their parents and elders have,” says the Reverend Michael Dowd, a climate change activist. “They’re living in a milieu, living in a culture where it’s not cool to trash the planet, and it’s beginning to become shameful to hold a ‘the end of the world is right around the corner’ worldview, so therefore, we can do whatever we want to the planet.”

The film is already a major success in Hollywood terms. With a budget of $125 million, it has so far brought in over $300 million worldwide, and has been out for less than a month. In other words, Noah is a big enough cultural event that it could substantially move the needle of public opinion, much like another environmental-catastrophe blockbuster, 2004’s The Day After Tomorrow, was later shown to have done. In one study, 83 percent of people who had viewed that film were “somewhat” or “very concerned” about global warming, as opposed to 72 percent of Americans who hadn’t seen it. (The study controlled for a variety of factors, including political ideology.)

At one point in Aronofsky’s film, Noah tells his family, “We have been entrusted with a task much greater than our own desires.” Whatever your faith and, indeed, whether or not you’re religious, a serious look at science and the state of the planet makes that statement inarguable. If Noah helps to further advance that message, then just like the movie’s namesake, it may also help to save us.