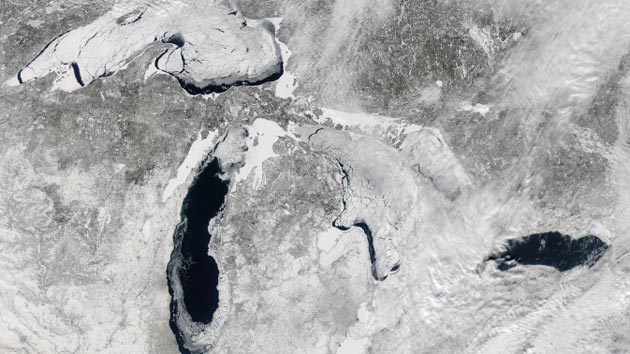 This story originally appeared in The Atlantic Cities and is republished here as part of the Climate Desk collaboration.

Over the winter, as polar vortices plunged the US Midwest into weeks of unceasing cold, the icy covers of the Great Lakes started to make headlines. With almost 96 percent of Lake Superior’s 32,000 miles encased in ice at the season’s peak, tens of thousands of tourists flocked to the ice caves along the Wisconsin shoreline, suddenly accessible after four years of relatively warmer wintery conditions.

The thing is, all of that ice takes a long time to melt. As of April 10, 48 percent of the five lakes’ 90,000-plus square miles were still covered in ice, down from a high of 92.2 percent on March 6 (note that constituted the highest levels recorded since 1979, when ice covered 94.7 percent of the lakes). Last year, only 38.4 percent of the lakes froze over, while in 2012 just 12.9 percent did–part of a four-year stint of below-average iciness. 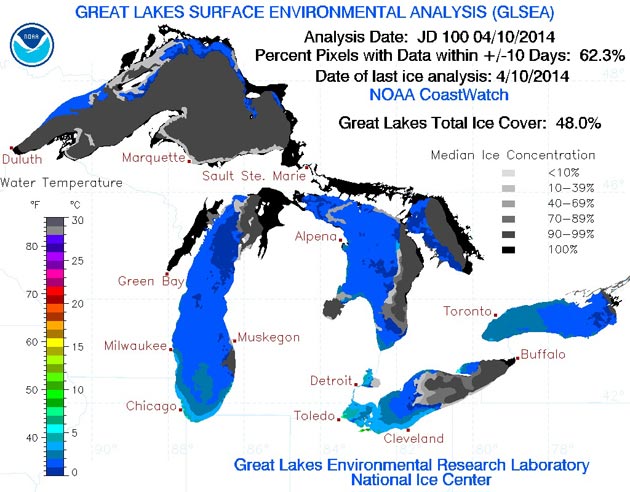 And as the Great Lakes slowly lose their historically large ice covers over the next few months, the domino effects could include lingering cold water, delayed seasonal shifts, and huge jumps in water levels.

Already, the impact of this icy blockade can be felt. On March 25, five days after the official beginning of spring, the Soo Locks separating Lake Superior from the lower Great Lakes opened for the season. But after a long and harsh winter, Lake Superior’s nearly 32,000 square miles were still nearly entirely covered in ice. It would be another eleven days before the first commercial vessel fought its way across Lake Superior–with the aid of several dedicated ice breakers–and down through the locks. 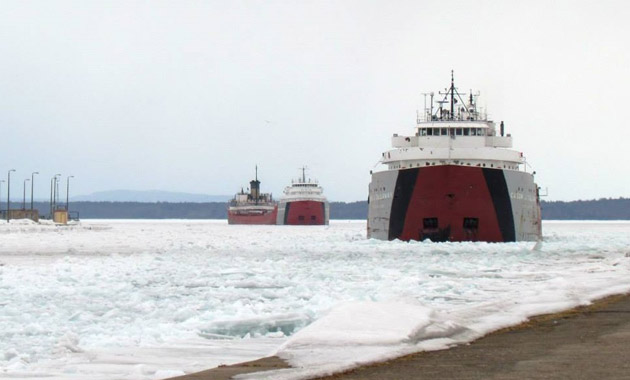 The trip across Lake Superior to the Soo Locks, which usually takes 28 hours, took these first ships of the season nine days. A third ship had to return to Duluth after being damaged by the ice. Detroit District, US Army Corps of Engineers Facebook

More than 200 million tons of cargo, mostly iron ore, coal, and grain, travel across the Great Lakes throughout the year. Even a little ice can make a big dent on this total. Only three shipments of coal were loaded up during March–69 percent less, by volume, than last year. Shipments of iron ore from the northern reaches of Minnesota were so low that the US Steel plant in Gary, Indiana, had to scale back production significantly in early April.

A sluggish start to the shipping season is just one of the cascading effects of the Midwest’s cold and icy winter. Some are good, and will allow the region to recover from years of historically low water levels. Others, like this delayed shipping season, less so.

Like the shipping troubles, some of the more unexpected things the lakes and their ecosystems could face in the next few months are the direct result of the lingering ice and cold:

Other changes will come about long after the ice melts, as water levels are predicted to rebound to levels not seen in the last few years. Seasonal shifts in water levels, with winter lows and summer highs, are normal. “If things stayed in sort of a balance, we would see all the lakes water levels going up and then going down. Every year: up, down; up, down,” says Drew Gronewold, a scientist with NOAA’s Great Lakes Environmental Research Laboratory. But, “when water levels change a lot over time, something is happening in one of those two parts of the season.”

Over the last few years, the summer highs and winter lows have both been well below their long-term average, as climate change produced far more rapid rates of evaporation. In December 2012, the Michigan-Huron system set a new low, breaking a record that had stood since the 1960s, according to Keith Kompoltowicz, the chief of watershed hydrology for the Army Corps of Engineers’ Detroit District. 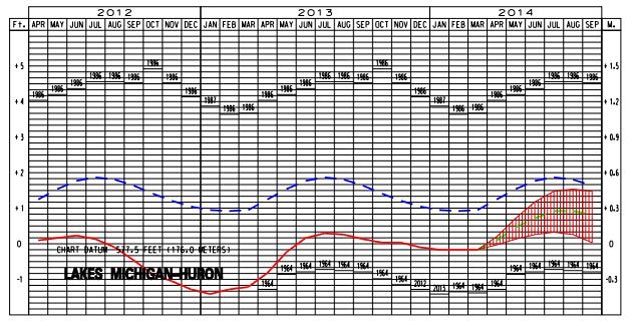 A three-year look at water levels in Lakes Michigan and Huron, including a six-month forecast, from the US Army Corps of Engineers Detroit District. The solid red line marks recorded levels, the red vertical lines a range of six-month projections, and the blue shows the long-term averages. The black bars indicate record highs and lows. Detroit District, US Army Corps of Engineers Facebook

Though Kompoltowicz says the usual March and April rise in water levels is occurring later than usual this year, already the lakes are seeing water levels that they haven’t had for several years. This past March marked the first time since April of 1998 that Lake Superior had reached its long-term average. And over the next few months, melting snow will feed the lakes and colder water could lower the rates of summer and fall evaporation. The amount of rain could either add to or subtract from this total. The Army Corps of Engineers and the National Oceanic and Atmospheric Administration generally forecast water levels six months out, and predicted levels for this September, Kompoltowicz says, range from 10 to 13 inches higher than lake levels were a year ago.

Though water level changes even over a several year period are normal, the rebound from record-low water levels is going to be a relief from the hand-wringing of the last few years. But it will likely be a temporary one. A hot summer with little precipitation could mute the effects of the icy winter. And, even if the lakes have more water this year, 2014 could be nothing more than a blip as climate change continues to wreak havoc. “We don’t know, as this winter really exemplified, what’s going to happen,” Gronewold says. “If we’re going to have three more severe winters, or flip back to three more winters like we’ve had the past few years.”