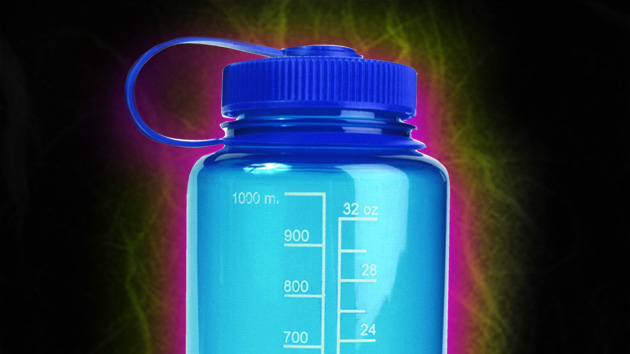 Many BPA-free plastics may leach potentially harmful BPA-like chemicals, a dilemma Mother Jones explored in our exposé on the plastics industry earlier this year. But consumers have had no way of knowing which of the items lurking in their pantries might wreak havoc on their hormones. Until now. A new paper in the journal Environmental Health identifies specific plastic products—including AVENT baby bottles, CamelBak sippy cups, and Lock & Lock food storage containers—that leach estrogen-mimicking chemicals. Perhaps more importantly, it also names a few options that are hormone-free.

Between 2010 and 2013, scientists from CertiChem, a private lab in Austin, tested 50 reusable BPA-free plastic containers. In most cases, they used a line of human breast cancer cells that multiplies in the presence of estrogen, as well as substances like BPA that mimic the female hormone. The researchers found that some products leached hormone-altering chemicals even before being exposed to conditions, such as heat from a dishwasher or microwave, that are known to unlock potentially toxic chemicals inside plastic. And most containers did so under some circumstances. After exposure to the type of ultraviolet rays that are found in sunlight (UVA) and used to sterilize baby bottles (UVC), more than three-quarters of the containers tested released synthetic estrogens. The chart below shows the results for a sampling of products before and after UV exposure.

Read about the methodology.

Many of the items above are advertised as healthy alternatives to plastics containing BPA and the hormone-altering chemicals known as phthalates. Born Free markets its baby products as the “natural choice for moms who want a safe, calm experience every time they feed their baby.” Weil Baby claims that its bottles are made from “revolutionary new materials” that are “ultra-safe.” After UV exposure, CertiChem’s study found that both companies’ products leached potent synthetic estrogens. (Born Free declined to comment on these findings, but Laura Monaghan, the company’s senior director of brand development, said via email that “Born Free products comply with all applicable federal safety standards and are tested by independent third-party laboratories to confirm compliance.” Weil Lifestyle said that it severed its licensing agreement with the company that makes its Weil Baby bottles in 2011, although the products are still on the market.)

The study doesn’t name the chemicals involved or reveal how exactly they affect human health. But a 2012 literature review by 12 prominent scientists found “substantial evidence” that hormone-altering chemicals are damaging, even at minute doses. BPA, the most studied estrogen-mimicking compound, has been linked to a long list of maladies, including to asthma, cancer, infertility, low sperm count, heart disease, liver problems, and ADHD. In some cases, the effects appear to be handed down, meaning the chemical reprograms an individual’s genes and causes disease in future generations.

Weil Baby claims that its bottles are made from “revolutionary new materials” that are “ultra-safe.” But after UV exposure, they leached potent synthetic estrogens.

The news isn’t all bad, though. CertiChem’s study also names several products that are free of estrogenic activity, among them green Nalgene water bottles (the green dye apparently blocks the effects of UV rays) and reusable water bottles from Topas and Zeonor. CertiChem’s founder, George Bittner, who is also a neuroscience professor at the University of Texas at Austin, cautions that even these products aren’t guaranteed to be safe since minor change to the chemical formula can introduce estrogens. “Everything depends on the exact chemicals that are in a given product,” he explains. “Something as small as tweaking the colorant can make a big difference.” Also, manufacturers sometimes swap one plastic for another without alerting consumers. Evenflo Feeding Inc. told Mother Jones that it had stopped using Tritan plastic, which was in the Evenflo products CertiChem tested, “due to a lack of customer demand.” But it wouldn’t say what it’s using instead.

CertiChem’s new paper builds on the findings of a 2011 study authored by CertiChem scientists and V. Craig Jordan, a well-known pharmacologist and Georgetown University professor, and published in the journal Environmental Health Perspectives. The group tested 455 store-bought food containers and storage products and found that more than 70 percent of them leached synthetic estrogens under some conditions.

The original paper didn’t mention brand names. But CertiChem went public with its findings that Tritan—which is marketed as estrogen free—was highly estrogenic in CertiChem’s tests. Tritan’s manufacturer, a $7 billion company called Eastman Chemical that was spun off from Eastman Kodak in the 1990s?, later sued CertiChem and its sister company, PlastiPure, for false advertising and unfair competition. During the trial, it came to light that some of Eastman’s own testing had found that Tritan was likely estrogenic. (For more on Eastman’s methods, see “The Scary New Evidence on BPA-Free Plastics.”) Nevertheless, Eastman won, and a federal judge barred Bittner’s companies from discussing their Tritan findings, except in scientific settings.

The court decision,? and the fact that CertiChem and PlastiPure are for-profit companies that collect fees for helping clients detect and root out estrogenic chemicals, has made some industry executives skeptical of CertiChem’s new study, which is heavy on Tritan data. “We believe that this discredits their findings,” says Jeremy Galten, the vice president of research and development at CamelBak, which makes some of its water bottles from Tritan. Eastman spokeswoman Maranda Demuth also dismissed the new paper and called CertiChem’s claims about Tritan misleading. “To ensure the safety of Tritan, Eastman has undergone extensive testing over multiple years using well-recognized scientific methods,” Demuth said. “We continue to stand by this testing and the safety of Tritan.”

About the methodology: Testing was performed using human breast cancer cells (MCF-7) and, in some cases, ovarian cells (BG-1). Chemicals were extracted for testing using a variety of solvents, including saline solution, pure ethanol, and ethanol with distilled water. The combination of solvents varied between products. Estrogenic activity was measured by comparing cells’ response to plastic extracts with their response to pure estrogen (17-beta estradiol). Less than 15 percent of the maximum response to estrogen was considered negative. For the purposes of the chart above, 15-25 percent is mild; 25-50 percent is moderate; 50-75 percent is high; and 75-100 percent is very high. Results differed depending on extraction method and type of UV radiation. The chart represents the highest values.