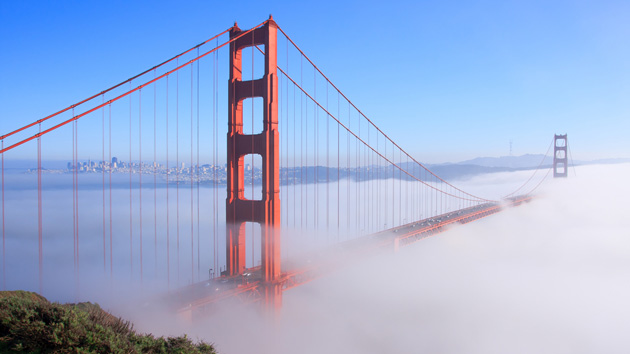 This story originally appeared in the Atlantic CityLab and is republished here as part of the Climate Desk initiative.

With California’s drought-stricken soil baked to the consistency of powdered Saltines, it’s difficult to imagine the state becoming even more dry. Yet that’s what is happening with the Central Valley’s winter fog, which over the years has been appearing less and less often—a trend that signifies yet more trouble for the state’s bedeviled agriculture industry.

When talking about the drought, much attention is given to the declining snowpack in the Sierra Nevadas. The melt-off from this winter snow historically has provided vast amounts of water to farms and cities, but over recent years the ‘pack has dwindled so much it’s now at 18 percent of its average accumulation, as shown in these satellite images from February 2011, 2012, and 2013: 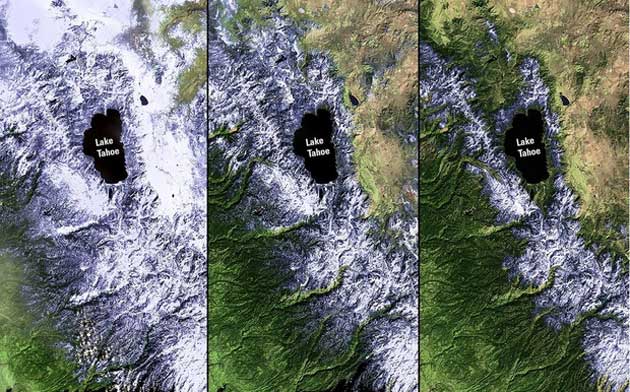 The same atmospheric forces that are drying California to the bone—like a shifting jet stream, which researchers say could become more pronounced as the planet warms—are also conspiring to expel another one of the state’s winter phenomena: the famous Tule fog. This cottony miasma arises during the Central Valley’s rainy season when the ground is cold enough to condense the air above. It’s a thick, chewy vapor, often reducing visibility from 600 feet down to 10 feet and causing multiple-vehicle accidents on local roadways.

Tule fog is becoming a shadow of its former self, though, according to Dennis Baldocchi and Eric Waller at the University of California, Berkeley. By studying satellite images, they found that despite yearly variations, the number of days with fog has steadily plummeted. In fact, since 1981 between November and February, there’s been a 46 percent decrease in fog days. And the persistence of severe drought has mightily tamped down on the emergence of Central Valley fog since 2012, adds NASA, which has provided this image of one of the last big fog events in 2011: 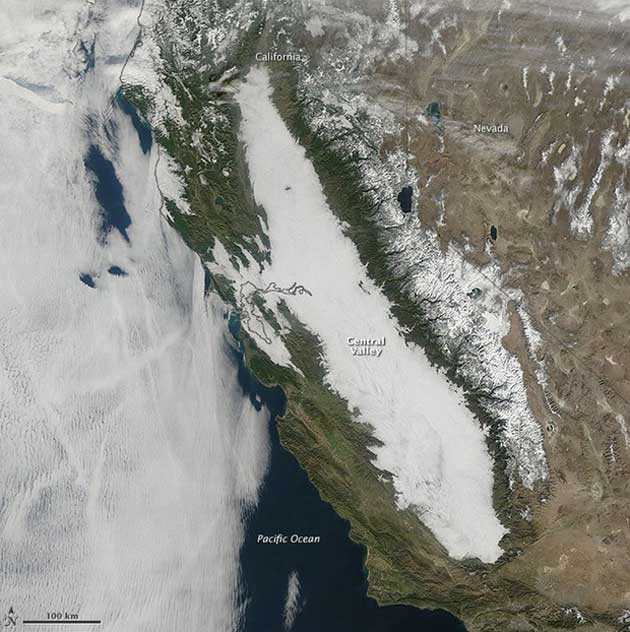 Waller and Baldocchi speculate that the fog’s disappearance is both occurring along with the state’s milder winters, and is also contributing to them, as less fog in the air means warmer temperatures. The clearer air may be good news for motorists, but it’s another kick in the butt to California’s multitude of fruit and nut farmers. Here’s NASA explaining why:

The fog is important to California’s crops because fruit and nut trees, like people, need sufficient rest before they can be their most productive. They get that rest in the winter when cold temperatures—between 0° and 7° Celsius (32° and 45° F)—bring on a dormant period. Fewer fog days corresponds with fewer cold days, and other studies have confirmed that the trees are now being exposed to hundreds fewer cold hours compared to 1982.

There’s no word yet on whether the fading fog will add to the drought’s economic drag. The latest estimate for that money-sucking vortex, issued by researchers late in May: a staggering $1.7 billion.