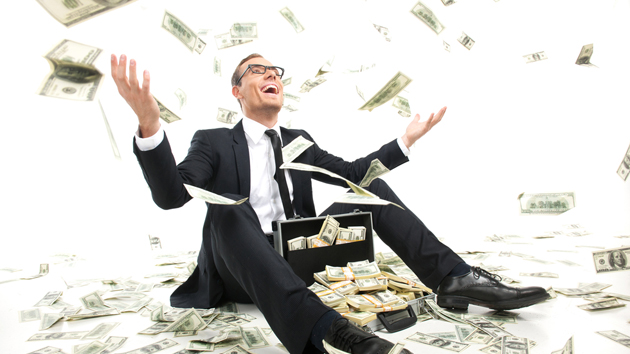 We’ve known for some time that as Republicans become more highly educated, or better at general science comprehension, they become stronger in their global warming denial. It’s a phenomenon I’ve called the “smart idiot” effect: Apparently being highly informed or capable interacts with preexisting political biases to make those on the right more likely to be wrong than they would be if they had less education or knowledge.

Now, a new study in the journal Climatic Change has identified a closely related phenomenon. Call it the “rich idiot” effect: The study finds that among Republicans, as levels of income increase, so does their likelihood of “dismissing the dangers associated with climate change.” But among Democrats and independents, there is little or no change in climate views as levels of income increase or decrease.

The study, by Jeremiah Bohr of the University of Illinois at Urbana-Champaign, was based on an analysis of pre-existing data from the 2010 installment of the General Social Survey—a leading source of survey information about the US public. In addition to questions about levels of education, income, and political party affiliation, the survey asked the following: “In general, do you think that a rise in the world’s temperature caused by climate change is extremely dangerous for the environment, very dangerous, somewhat dangerous, not very dangerous, or not dangerous at all for the environment?”

Bohr looked specifically at those individuals who chose the “not very dangerous” or “not dangerous at all” options. And he found that at the lowest income level, the probability that a Republican would give one of these dismissive answers was only 17.7 percent. But at the highest income level, it was 51.2 percent. Here’s a visualization of the chief finding, showing how the likelihood of a Republican giving one of these answers changes in relation to wealth: 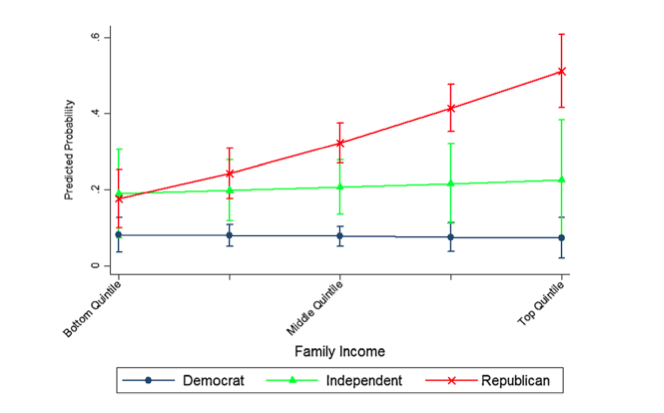 This therefore leads to a surprising conclusion: “At the bottom quintile of income, Republicans are not significantly different from either Independents or Democrats” with respect to their denial of climate risks, the study reports. It’s only as income increases that Republicans become so much more likely to be deniers.

So why does this occur? There are several possibilities discussed in the paper.

The first is that income is actually a proxy for something else: Namely, being politically aware. It’s possible that being wealthy is related to paying more attention to politics and your political party, and people who do so would be more aware of what those who agree with them on other issues actually think about global warming. (The study controlled for another possible influencing factor, education.)

The other possibility, though, is that climate denial is a defense of economic interests. “Among individuals with conservative political orientations, there is a correlation between occupying advantageous positions within industrial economic systems and an unwillingness to acknowledge the risks associated with climate change,” Bohr writes. “Perhaps to validate their economic interests, these individuals are more likely to process information on climate science through political filters that result in denying the risks produced by climate change.”