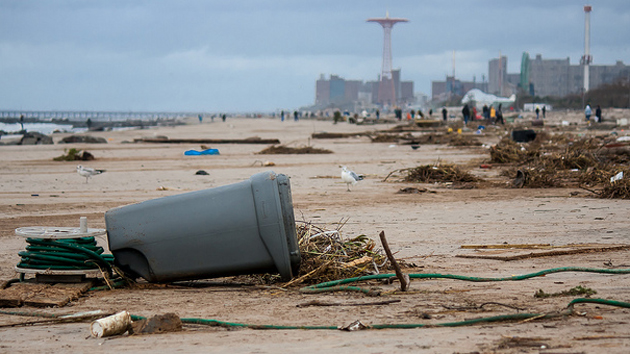 This story originally appeared on The Atlantic and is republished here as part of the Climate Desk collaboration.

As climate change increases the intensity and (possibly) the frequency of major coastal storms, what will be the economic consequences?

For years economists have debated whether destructive storms are even bad for a country’s economy. To a non-economist, the ill effects of a storm might seem intuitive, but economists have a knack for finding plausible counterintuitive explanations. When it comes to a major natural disaster, they had four competing hypotheses: Such a disaster might permanently set a country back; it might temporarily derail growth only to get back on course down the road; it might lead to even greater growth, as new investment pours in to replace destroyed assets; or, possibly, it might yet even better, not only stimulating growth but also ridding the country of whatever outdated infrastructure was holding it back. Woohoo. 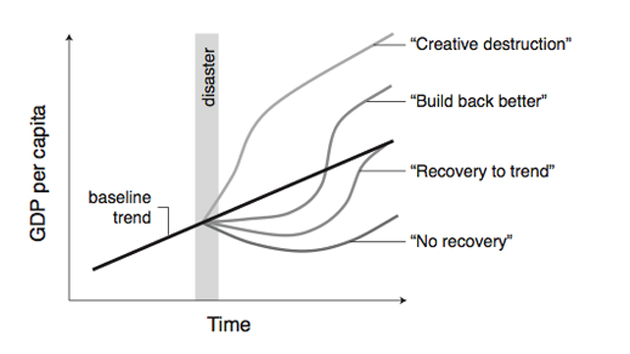 Interesting theories, but time to test them out against some empirical data. And that’s what economists Solomon M. Hsiang of the University of California-Berkeley and Amir S. Jina of Columbia set out to do in a paper released this week.

Hsiang and Jina looked at 6,712 cyclones, typhoons, and hurricanes observed from 1950 to 2008 and the economic fortunes of the countries they struck in the years that followed. With their data, Jina and Hsiang can decisively say: These storms are bad—very bad—for economic growth.

“There is no creative destruction,” Jina told me. “These disasters hit us and [their effects] sit around for a couple of decades.” He added, “Just demonstrating that that was true was probably the most interesting aspect for me to start with.”

Hsiang and Jina find that such storms (which they group under the umbrella term “cyclones”) can be as bad as some of the worst sorts of man-made economic challenges. A cyclone of a magnitude that a country would expect to see once every few years can slow down an economy on par with “a tax increase equal to one percent of GDP, a currency crisis, or a political crisis in which executive constraints are weakened.” For a really bad storm (a magnitude you’d expect to see around the world only once every 10 years), the damage will be similar “to losses from a banking crisis.” The very worst storms—the top percentile—”have losses that are larger and endure longer than any of those previously studied shocks.”

Here’s a little chart they made comparing these different sorts of disasters: 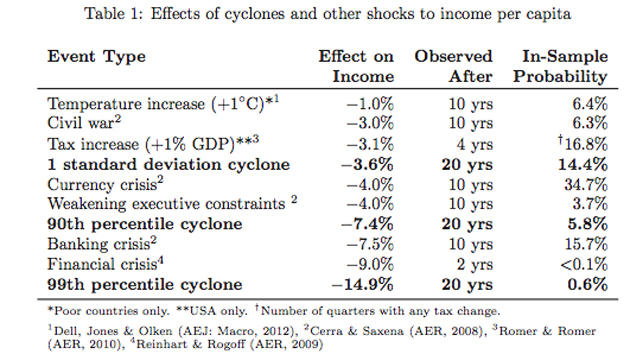 The effects are lasting: Overall, they find that “each additional meter per second of annual nationally-averaged wind exposure lowers per capita economic output 0.37 percent 20 years later” (emphasis added). Put simply, economies “do not recover in the long run.”

So what does this mean for a planet with a changing climate?

Projections for storm patterns as the planet’s climate morphs are, as Jina put it, “a very complex area.” How do you choose which model to rely on? You go with, Jina says, “the best”: those of Kerry Emanuel at MIT, world expert on cyclone patterns.

When they meshed their backward-looking empirical calculations with Emanuel’s forward-looking projections, the number they got was startling: $9.7 trillion—the present discounted value “of expected losses due to enhanced cyclone activity” if we don’t take any action to dial back greenhouse gas emissions. (This is the calculation they make at the 95 percent confidence interval, though the figure could range from $3.9 trillion to $15.5 trillion.)

“For me,” Jina says, “it is a very convincing argument to say that we need to mitigate as much climate change as we can.”