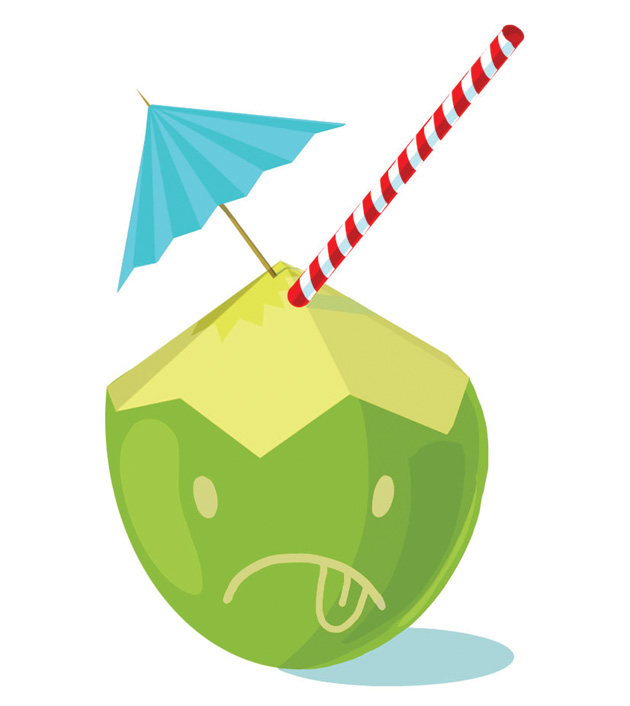 We’ve entered the age of the coconut. While the lactose intolerant quaff Starbucks’ new coconut milk lattes, the gluten averse are busy baking with coconut flour. The number of coconut oil products—for both cooking and skin moisturizing—grew by 800 percent between 2008 and 2012.

Of course, the craze started with a different part of the hairy tropical fruit: its liquid center. Ethnic markets in the United States have sold coconut water for decades, but it didn’t go mainstream until 2004, when, as the New York Times‘ David Segal reported earlier this year, two separate brands, Vita Coco and Zico, happened to launch simultaneously. Inspired by the drink’s popularity in Brazil and Central America, the entrepreneurs emphasized the beverage’s hydrating minerals—an all-natural Gatorade. Food trends analyst Harry Balzer of the market research firm NPD Group notes that the launches co­incided with our growing fixation on natural eating; Whole Foods was an early vendor. Between 2008 and 2012, the number of coconut water brands quintupled. Today, a 12-ounce serving goes for $1.50 to $2.00—adding up to a $500 million industry, with PepsiCo and Coca-Cola owning big sellers.

After a lawsuit accused Vita Coco of exaggerating health claims, the brand rewrote its labels and paid a $10 million settlement.

Americans were the perfect market for this salty-sweet liquid because we already bought into the benefits of post-exercise beverages, says Jonny Forsyth of another market research group, Mintel. But ads touting coconut water’s superior hydration turned out to be overblown. After a 2011 lawsuit accused Vita Coco of exaggerating when it claimed that the beverage had “15 times the electrolytes found in sports drinks,” the company agreed to rewrite its labels and shell out a $10 million settlement (though it did not admit any wrongdoing). Lilian Cheung, director of health promotion at Harvard’s School of Public Health, says coconut water does contain some electrolytes, especially potassium. And it usually packs less sugar than sports drinks—around 1.3 grams an ounce compared to Gatorade’s 1.7 grams. But for those getting seriously sweaty during workouts, sports drinks contain more sodium than coconut water. And for the rest of us, water is still the best choice for hydration, says Cheung, especially because it’s easy to replace lost electrolytes with food (oranges, spinach, and kidney beans, for example).

Iffy science notwithstanding, the coconut water trend spurred industry confidence in the fruit’s oil ($10 to $15 for a jar), which came with a whole new set of questionable health promises. In 2005, the Food and Drug Administration scolded health guru Joseph Mercola for saying that Tropical Traditions Virgin Coconut Oil could “reduce the risk of heart disease” and “lower your cholesterol.” Some nutritionists have praised the oil’s higher proportion of medium-chain fatty acids, which are less likely than long-chain fatty acids to deposit fat into your tissue. But unlike olive oil or vegetable oil, coconut oil is still mostly saturated fat, and eating too much of it could raise levels of the bad kind of cholesterol, “a major cause of heart attacks,” says Frank Sacks, a Harvard professor of cardiovascular disease prevention. Even more so if the product has gone through harsh processing, says Cornell nutrition science professor Tom Brenna.

Here’s what coconut products are good for: companies’ bottom lines. American brands are “making really high margins and buy the coconuts for virtually nothing,” Mintel’s Forsyth told BeverageDaily.com. In the Philippines, the world’s second-largest coconut producer after Indonesia, nearly two-thirds of small-scale coconut farmers live in poverty. Though harvesting the fruit requires a perilous climb, often up trees treated with harsh pesticides, they make just $3 a day at the height of the harvest. Each coconut yields around 500 mL of liquid; a 12-ounce bottle uses about two-thirds of a nut. Of the $2 that you pay for a bottle of the stuff, the farmer makes between 7 and 14 cents. And don’t forget that all that coconut water must be shipped across the planet, adding considerably to the product’s greenhouse gas footprint.

So what’s a coconut lover to do? One option: Buy an ethically made product. Earlier this year, Fair Trade launched a coconut certification program that guarantees farmers a 10 percent premium on top of their sale price to be used toward causes like typhoon relief. Participants in the program include Naked, Coco Libre, and Nutiva Virgin Coconut Oil. The brand Harmless Harvest only works with organic farms, and its Fair for Life certification prioritizes fair pay. Another company, Big Tree Farms, reduces shipping emissions by selling dehydrated coconut powder so you can make your own coconut water. Guilt remedies? Maybe. Magic health elixirs? Probably not.