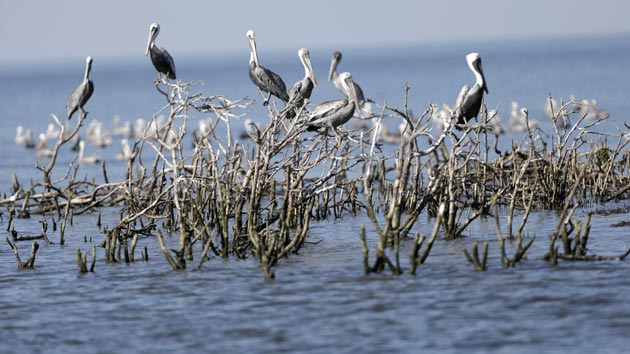 Pelicans in the fast submerging mangroves on Cat Island, a former nesting ground which has mostly eroded into the Barataria Bay in Plaquemines Parish, Louisiana.Gerald Herbert/AP

The GPS showed David Morgan still on dry land—but the waves bumping beneath his boat revealed the reality of this lost Louisiana landscape. Rising seas have obliterated 30 points on the map in the last three years at Plaquemines Parish where Morgan lives.

Sugarcane fields, citrus groves, backwoods—all gone. “This was all land here when I was a kid. There was no water anywhere,” said Morgan, 57, slowing the boat to pass oyster beds. “I used to hunt rabbits there with my dog,” he said.

Louisiana is losing land to the sea faster than anywhere else in the world.

But the authorities say they have a plan to turn back the seas—and get BP to pay a substantial share of the $50 billion cost out of criminal penalties from the blowout of its well in the Gulf of Mexico.

The plan includes proposals for more than 100 engineering projects along the coastline, diverting the Mississippi, dumping fresh sand on barrier islands, and re-planting degraded wetlands to reinforce the coast. The state’s computer forecast shows that, if all the projects come in on time, by 2060 Louisiana could start regaining land.

The big question is: will it work? 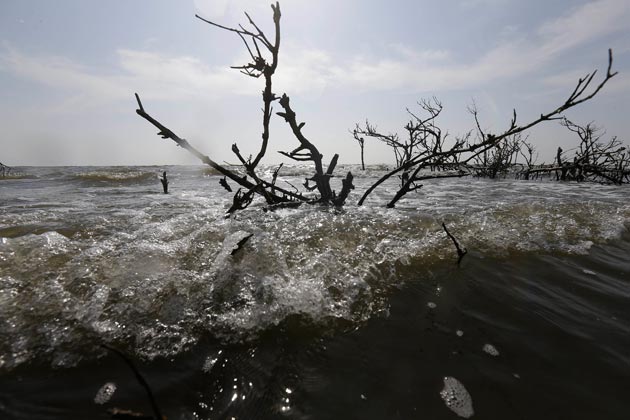 Officials say the ambitious plan is the best hope yet for saving the coast. Louisiana has lost nearly 1,900 square miles of land over the past 80 years—a disappearing act that claims on average a football field an hour.

In Plaquemines Parish, the remaining land looks moth-eaten, chewed up by oil industry canals and the incoming waters of the Gulf of Mexico.

Left unchecked, the state is projected to lose an additional 1,750 square miles in the next 50 years.

The land began vanishing from southern Louisiana about 80 years ago when the authorities began penning in the Mississippi after catastrophic floods.

The system of levees cut off the river from the delta, choking off the sediment needed to shore up the coast.

A decade later, oil drilling took off in coastal areas of Louisiana. Industry canals tore up the coastal wetlands.

Rising seas under climate change accelerated the land loss, exposing New Orleans and the valuable oil, shipping and seafood industries on the coast to hurricanes and storm surge.

Sea level rise is now the leading cause of land loss, said Virginia Burkett, chief scientist for climate and land use change at the US Geological Survey, leading a recent tour of the restoration projects organized by the Society of Environmental Journalists.

“If sea level rise doubles as we expect over the next century, can you imagine what is going to happen to this landscape?” she asked. “Without the barrier islands and marshes to attenuate the storm surge, the people of New Orleans are basically surrounded by an earthen levee.”

Even the state’s Republican governor, Bobby Jindal, who publicly downplays the dangers of climate change, has committed to the plan to hold back the seas. 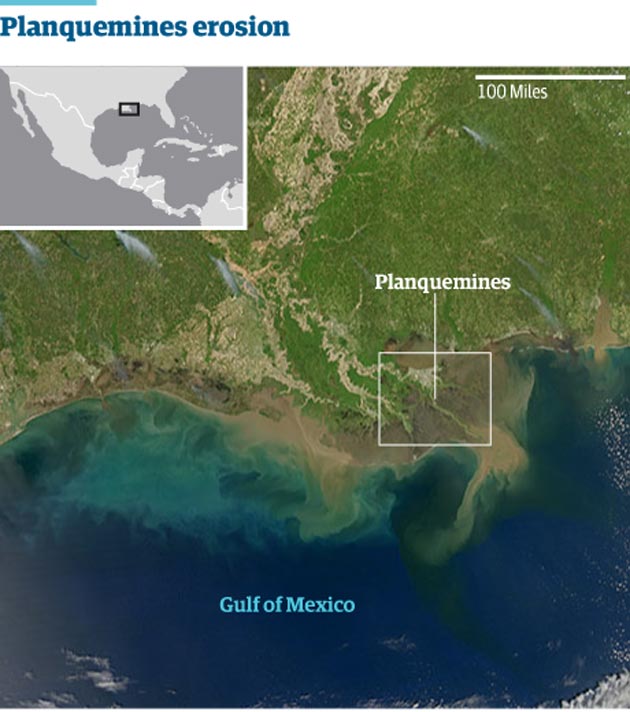 The Mississippi-Atchafalaya river plumes are visible here as they empty into the Gulf of Mexico, on 17 April 2009

Local politicians have also signed on. “This is how we are going to save Louisiana. It is doable,” said Billy Nungesser, president of Plaquemines Parish. “I think we can realistically put back what we had 25 or 30 years ago.”

However, the engineering projects are prohibitively expensive. Congress has refused to fund the $50 billion and private estimates for the engineering works range up to $94 billion—which is where BP comes in.

The Louisiana authorities are banking heavily on BP paying a large share of the costs. Under a law passed by Congress, 80 percent of the penalties obtained from BP following the 2010 blowout of its oil well in the Gulf of Mexico are designated for coastal restoration. The oil company has already made a downpayment of about $1 billion for coastal restoration.

After a judge in New Orleans last month found BP had exercised “gross negligence” in the run-up to the disaster, the oil company could now be on the hook for as much as $18 billion in penalties under the Clean Water Act. The judge will begin court proceedings on penalties in January.

A separate lawsuit is trying to get oil and gas companies to pay for restoration, because of the damage done by the canals.

Burkett said the plan was different from earlier—failed—restoration efforts because it aims to mimic the way sediment, debris and even trees were carried along by the Mississippi and deposited on the delta, extending land into the Gulf of Mexico. “What we have learned through time is restoring the natural process is more effective than building concrete dams and dykes,” she said. 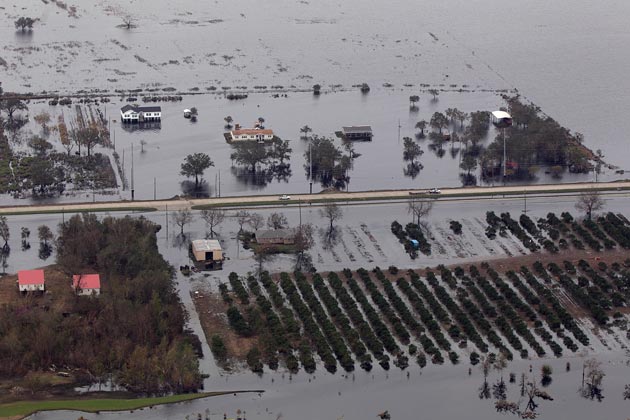 This time around, engineers are importing sand to rebuild barrier islands scoured by hurricanes. At Pelican Island, a 2.5 mile strip in the Barataria Bay, crews used 2.5m cubic yards of sand and silt mined from the Gulf of Mexico to build dunes and marshes, and rolled out protective fences around newly planted grasses.

But it has cost $77 million so far to restore Pelican Island, and the coastal restoration authority admits that, even after all this effort, Pelican Island has a limited life-span, just 20 years, before it too is devoured by the sea.

Given the rate of land loss, it’s hard to keep pace. “Even though a couple of billion dollars sounds like a lot of money we have found it woefully inadequate to do a lot of good here on the coast that we’re looking at,” said Brad Inman, a senior project manager on the restoration project from the Army Corps of Engineers.

It’s also unclear whether re-engineering the coast can ever work—no matter how massive the scale. In research published earlier this year, Richard Condrey, a retired coastal ecologist from Louisiana State University, said this approach to restoring the coast was bound to fail.

It was time to start again—before it’s too late.