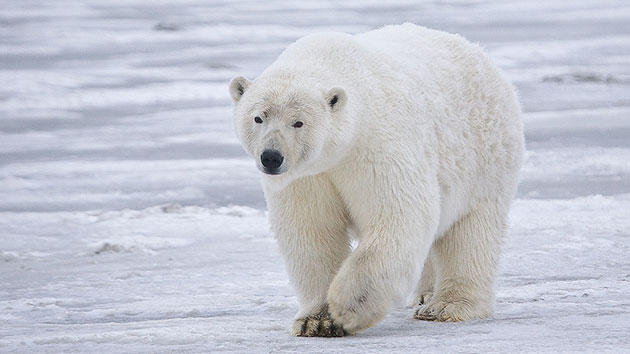 Some polar bear populations have dropped in recent years, but others appear to have stabilized. <a href="http://commons.wikimedia.org/wiki/File:Polar_Bear_-_Alaska.jpg">Wikimedia Commons</a>

If you’re looking for the ground zero of climate change, head to the Arctic. Nowhere else on Earth is changing as quickly or as dramatically; air temperatures there are rising twice as fast as at lower latitudes. In the summer of 2012, Arctic sea ice reached the lowest level ever recorded, shrinking to less than half the area it occupied a few decades ago. Ice has rebounded somewhat in the two years since, but it is still on a downward trajectory of about 13 percent per decade and could disappear altogether in summer months by 2030.

The distressing Arctic prognosis is made abundantly clear in a new report card issued today by the National Oceanic and Atmospheric Administration. The report card comes out every winter and provides an update of where things currently stand in the Arctic. Here are a few key findings:

Sea ice is disappearing: The 2014 summer sea ice minimum—a snapshot taken when sea ice is at its lowest—was 23 percent below the 1981-2010 average, a loss of ice 2.6 times greater than the total area of California. In the map below, the minimum (which happened in September) is on the right; the pink outline shows the average. The winter maximum, on the left, was also below average, by about 5 percent: 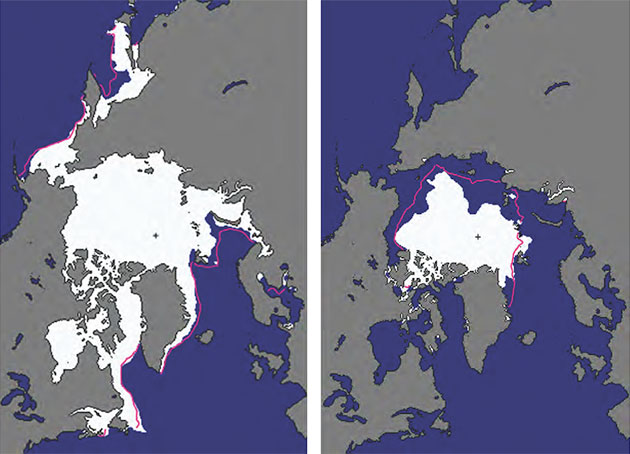 Arctic sea ice extent in the winter maximum (left) and summer minimum (right) were both below average (pink line) in 2014. NOAA

Here’s that same data, expressed a different way. You can see that both the minimum and maximum have fallen over the last several decades: 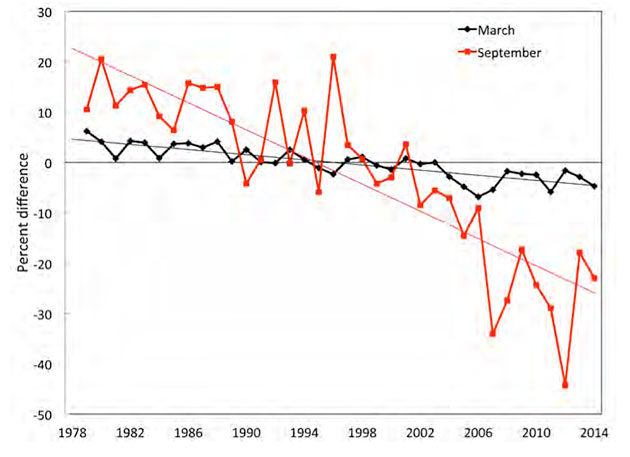 Melting sea ice doesn’t raise sea levels much, because the ice is already floating in the ocean. But because the white ice reflects sunlight back into space whereas dark ocean water absorbs it, losing the ice makes global warming happen even faster. Sea ice is also a key wildlife habitat. Perhaps most importantly, sea ice is a very sensitive guage of overall warming; when ice levels drop like this, it’s an indication of change happening throughout the climate system.

Polar bears are becoming more scarce: This year’s Arctic report card features a special section on the state of polar bears, which depend on sea ice to travel, hunt, and mate. The more data biologists are able to collect, the more clear the link between declining sea ice and declining bear numbers becomes; the report reaffirms that global warming is “the most significant threat to the long-term survival of the species”. Between 1987 and 2011, in Canada’s western Hudson Bay, numbers dropped from 1,194 bears to 806, a loss attributed to an ever-shorter ice season. In the southern Beaufort Sea the loss was even more dramatic: A 40 percent decline just between 2001 and 2010, to about 900 bears.

The good news is that several populations appear to have stabilized at lower levels, although the true picture is fuzzy because data is frequently sparse. The map below shows the direction of the population trend for all 19 polar bear populations, as of 2013: 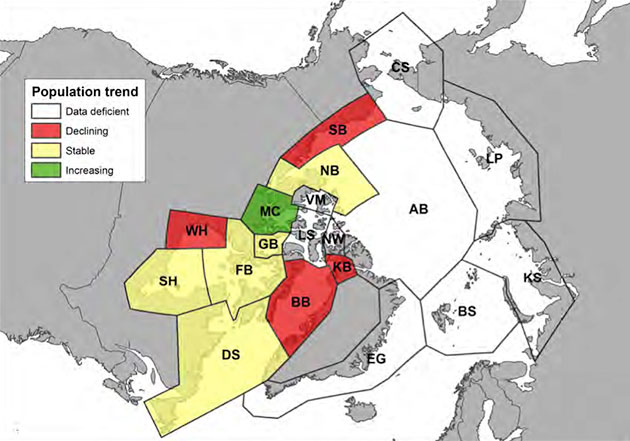 Greenland is melting away: The real threat for sea level rise is the Greenland Ice Sheet, which is currently resting on land. If all of that ice were to melt, it would release enough water to raise global sea levels by an insane 24 feet—enough to pretty much wipe out most coastal cities. That extreme case is still probably hundreds of years off, but widespread melting is already taking place. This summer, 40 percent of the ice sheet was in melt, and for 90 percent of the summer the level of melting was above the long-term average. That’s roughly a 30 percent increase in summer melting since 1979; just in the past decade, the ice sheet has lost 294 billion metric tons of ice, roughly four times the weight of every living thing on Earth.

The Arctic is getting greener: As ice disappears at the highest latitudes and ice-free tundra warms up at lower latitudes, vegetation in both regions thrives. Satellite sensors can detect changes in the landscape’s color, and over the last couple decades the trend has been decidedly green, another indication of warming. Tundra greenness increased 20 percent between 1982 and 2013, an indication that Arctic habitats are undergoing a major thaw. The same trend is playing out beneath the waves, as melting sea ice leaves a path for more sunlight to reach underwater. Satellite records for 2014 show exceptionally high underwater concentrations of chlorophyll—the molecule that helps plants digest sunlight—and plankton blooms that have increased in size by up to 70 percent. Here again, replacing white ice with darker, green surfaces increases the overall rate of warming.