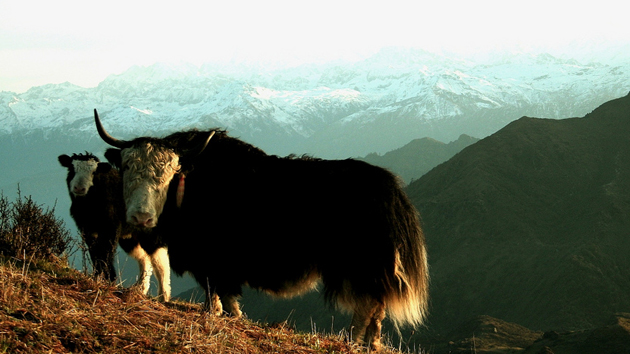 It gets pretty cold this time of year in Tibet. For centuries, the solution to this problem was a win-win: just burn that huge pile of yak dung that’s been accumulating all summer.

For millions of nomadic Tibetans, it’s a system that works. But that system comes at a hefty cost. Tibetan homes have some of the worst indoor air pollution in the world, and the soot the dung fires release is a big contributor to climate change.

Yak dung, when used as fuel, is arguably dirtier than coal but is definitely much cheaper. Particulate pollution from burning animal dung greatly increases the risk of lung cancer and other respiratory ailments, the occurrence of which can be slowed by switching to cleaner ways of heating homes.

According to the World Health Organization, millions of people die worldwide each year because of indoor air pollution from traditional stoves, which can be fueled by coal, wood, crop waste, and other sources in addition to dung. In response, well-meaning nongovernmental organizations, including a group backed by Hillary Clinton, have promoted the use of advanced indoor cookstoves and cleaner-burning sources of energy, like solar, to improve public health around the world. The dangers of stove-related indoor air pollution are particularly pronounced in the frigid Himalaya region, where near-constant heat is a necessity. An additional motivation is to cut down on black carbon pollution—which tends to increase the melting rate of snow and ice in the nearby Himalaya region (think: dark snow).

A recent study showed that black carbon, emitted from the incomplete combustion of fuels for cookstoves and other sources, like motor vehicle exhaust, has been severely underestimated in global climate models. It may represent the second leading cause of global warming, next to carbon dioxide, though CO2 is far ahead of it. That ranking was reflected in the recent Intergovernmental Panel on Climate Change report, which puts the warming effect of black carbon on par with methane. (And yes, if you must, this means the impact of burning animal dung is now on par with cow farts. It seems that pretty much all aspects of that whole digestion thing aren’t great for global warming.)

The good news is that the lifetime of black carbon particles is relatively short—they stay in the atmosphere for only a few weeks before falling out and therefore are generally a regional problem. That means efforts to tackle the black carbon issue will have almost immediate benefits.

The bad news is that the effect is felt particularly harshly in the Himalayas, which are warming at a rate three to five times that of the global average. A 2010 study found black carbon is responsible for at least 30 percent of the recent decline in glacial extent there, and emissions are still increasing in both India and China.

A new paper accepted for publication in the journal Atmospheric Environment provides some of the first quantitative data on both black carbon and indoor air pollution during the cool season in Tibet. Via air samples and a survey of households in the Nam Co region of Tibet—the name means “heavenly lake”—researcher Eri Saikawa and her team learned things were even worse than they suspected. Her survey admittedly had a small sample—just 23 households responded—but is nevertheless illuminating.

A majority of residents had access to improved cookstoves, even solar power, but yet every single respondent still used yak dung for heating. Saikawa explains this by noting that average annual income per household is just $890 a year. Yak dung is simply the cheapest fuel available.

On average, households that used an improved cookstove with a chimney actually had worse air pollution than the traditional tents. One house using an improved stove measured seven times the World Health Organization standard. It turns out the insulated walls of homes with chimneys kept heat inside better, but they kept the pollution inside, too. Households using the improved stoves also tended to underestimate their health threat, probably due to a false sense of security, researchers found.

Saikawa shared with me footage her team took of a family cooking with yak dung inside a traditional home. (The camera, unfortunately, was positioned near the air quality monitoring equipment, so there’s a nasty buzzing noise. Sorry!)

The families surveyed reported spending an average 16 hours a day indoors during the harsh winter. Imagine breathing in that air for two-thirds of your day.

Based on the measurements her team obtained, Saikawa suspects that if yak dung burning is properly accounted for, Tibet’s contribution to regional black carbon emissions is about three times greater than official estimates that are used in climate models. Yak dung burning in Tibet alone may produce an additional 1,100 tons of black carbon per year. That’s roughly 0.01 percent of the world’s total, but that figure adds up when extrapolated to other parts the world that Saikawa believes also severely underestimate the contribution from traditional cookstoves.

These results present a conundrum for development workers and scientists alike: The improved cookstoves may actually be more harmful for public health than traditional yak dung burning, but yak dung burning in aggregate is having a much greater impact on climate than previously thought. What’s clear is that the current generation of improved cookstoves is not adequate to solve either the public heath or the climate problems.

I first met Saikawa after her presentation at the American Meteorological Society annual meeting in Atlanta earlier this year. This week, I followed up with her by phone. “It’s a unique situation,” Saikawa says. In her opinion, something needs to change. Yak dung burning can’t go on as it has—it’s too dangerous. But, if local governments start discouraging yak dung burning, “then what do they do with the yak dung?” Good question.

“These people live in very unhealthy conditions, with significant health issues we’re not even aware of, including pneumonia, cardiovascular diseases, asthma, and tuberculosis,” Saikawa says. “We don’t know what’s happening there, so not much is being done. This is something we should be concerned about.”

As her research shows, just because an NGO provides a solar cookstove for free doesn’t mean Tibetans will give up yak dung any time soon. “There’s so much disconnect between what researchers think is ‘improved’ versus what they actually use. We have to think about the way that could be useful for their lives and that is going to be helpful for them but also reducing emissions,” Saikawa explained. “It’s not just about engineering. It’s about their culture and how they live and how we understand that.”

A member of Saikawa’s research team returned to the Tibetan region this summer and gathered more data that they plan to turn into an additional study next year. In the meantime, she’s hoping to work together with engineers and social scientists to help design a compromise solution for the people of the Himalayas: a new type of cookstove that burns yak dung cleaner—potentially solving the twin problems of air pollution and black carbon in one shot.