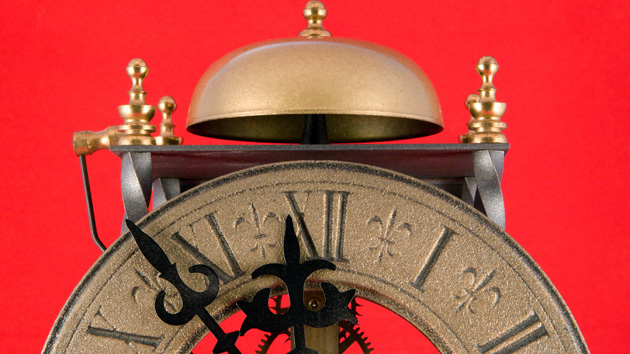 In 1947, the specter of nuclear holocaust prompted the Bulletin of the Atomic Scientists to come up with a “Doomsday Clock.” The clock was meant to highlight just how close humans had come to wiping ourselves off the map. Midnight on the clock represented global catastrophe—the end of civilization as we know it.

Back then, the Bulletin set the clock to 11:53 p.m. The group has revisited the setting each year since, occasionally adjusting it forward or backward to reflect changes in world events.

The answer is that nuclear war is no longer the only plausible, existential threat we face, according to the Bulletin‘s science and security board. The other: climate change. And, more specifically, the world’s lackluster response to climate change. As Lawrence Krauss explained in Slate two years ago, climate change was added to the clock-setting calculations in 2007, along with the dangers presented by biotechnology and bioterrorism. Despite ever-growing public awareness of the problem, global inaction on climate change has only darkened the picture since then. In a statement Thursday, the Bulletin warned:

Current efforts are entirely insufficient to prevent a catastrophic warming of Earth. Absent a dramatic course correction, the countries of the world will have emitted enough carbon dioxide and other greenhouse gases by the end of this century to profoundly transform Earth’s climate, harming millions upon millions of people and threatening many key ecological systems on which civilization relies.

This is not a new sentiment. Earlier this week, in his State of the Union Address, President Obama called climate change the world’s greatest threat to future generations. He wasn’t trying to be hyperbolic. And he might be right.

What’s interesting about the Doomsday Clock, though, is that it represents an attempt—albeit an inherently subjective one, by a group of scientists with their own interests and biases—to put the threat of climate change in context. How bad is it? Really, really bad. And yet, in the Bulletin‘s view, the threat of a warming planet is not quite as bad as the nuclear threat in 1953. Nor is it quite on par with the threat of nuclear war in 1984.

Remember, it isn’t only climate change that has us poised precipitously at 11:57 p.m. today. It’s the combination of climate change and some discouraging recent developments on the nuclear-proliferation front. At a press conference Thursday, Bulletin executive director Kennette Benedict emphasized both. About the nuclear threat, she said:

The arms-reduction process has ground to a halt, with the United States and Russia embarking on massive programs to modernize their nuclear forces—thereby undermining existing nuclear weapons treaties. At the same time, other nuclear-weapons states are joining this expensive and extremely dangerous modernization craze.

The two threats may seem unrelated, but it’s worthwhile to think about them in the same breath, because there are some interesting parallels between them. The greatest danger posed by nuclear bombs is not their explosive power. It’s the prospect of a nuclear winter—that is, a form of very sudden, human-caused, climate change.

The chart above shows the settings of the Doomsday Clock between 1947 and 2012. The lower the graph, the higher the probability of catastrophe. Wikimedia Commons

When we talk about the effects of anthropogenic global warming, we talk a lot about uncertainty. Actually though, the threats posed by climate change are not nearly as uncertain as those posed by nuclear proliferation. We may not know the precise effects of a warming planet, but we do know that it’s happening, and we have a pretty good idea of what will ensue if we don’t change course soon: crop failures, extinctions, famines, water shortages, regional conflicts, coastal floods, and more extreme weather events.

In contrast, we really have no idea what will happen if we fail to rein in the world’s nuclear arsenals. In the worst case, it could lead to all-out nuclear world war, which would change the climate far more rapidly than our current pace of greenhouse gas emissions. In the best case, countries will continue to maintain nuclear arsenals, but no one will ever use them again. And of course there are a lot of plausible scenarios in between.

We could spend years arguing about which is more dangerous, climate change or nuclear proliferation. But that would be like standing around in a burning building, arguing about whether it would be worse to die from smoke inhalation or get crushed by a falling beam.

Likewise, we could have a lively debate about whether the Bulletin of the Atomic Scientists is right that we’re slightly closer to the brink of disaster today than we were a few years ago, or in 1984, or in 1947. But the real point of the Doomsday Clock is to remind us that we have the power to wind it back. We just haven’t been doing much of that lately.