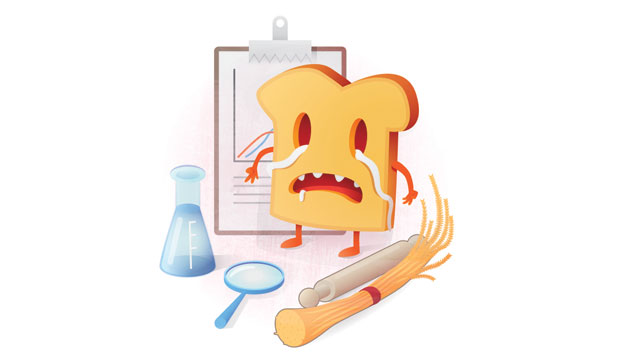 Considering that you can now find gluten-free everything, from Bisquick to bagels, it seems remarkable that our national obsession with the wheat protein that gives bread its elasticity is only about a decade old. Doctors have long known about a relatively rare condition called celiac disease, in which gluten damages the small intestine. But in recent years, best-selling books like Wheat Belly and Grain Brain have popularized the notion that gluten is the hidden culprit behind a host of hard-to-diagnose health problems, from indigestion to fatigue. Once you excise bread and other wheat products from your diet, the books claim, you’ll be on the path to everything from top mental performance to a svelte figure.

There’s no scientific consensus on how prevalent gluten sensitivity is, what triggers it, or even if it exists at all.

The message has been quite lucrative, and not just for publishers. According to the market research firm Mintel, sales of foods labeled “gluten-free” surged 44 percent between 2011 and 2013, reaching an estimated $10.5 billion. TGI Friday’s now offers an entire menu devoted to the category, complete with a burger served in a “gluten-sensitive bun.” Crave mac and cheese but avoiding gluten? Annie’s has you covered. Oreos? Boulder, Colorado-based Glutino offers a gluten-free knockoff (along with everything from breadcrumbs to Pop-Tart facsimiles).

Yet people have been growing, grinding, leavening, and baking wheat since the dawn of agriculture 10,000 years ago. It remains the globe’s most widely planted crop, serving as the main staple for a third of humanity. Is it really conceivable that it could have been slowly killing us all along?

Wheat Belly‘s author, cardiologist William Davis, claims that modern agricultural breeding has changed the nature of gluten, turning it toxic. He argues that wheat varieties developed in the 1960s and ’70s introduced a novel protein called gliadin that has led to all manner of chronic problems, including obesity and diabetes. Yet Davis’ claims have been roundly criticized by grain scientists. For that matter, there’s no scientific consensus on how prevalent gluten sensitivity is, what triggers it, or even if it exists at all.

Stephen Jones, a wheat breeder at Washington State University, suspects that we’ve been scapegoating the grain when we should be blaming the oven. Before I explain why, let me make clear that Jones is no apologist for Big Wheat. Back in 2003, the industry-dominated Washington Grain Commission threatened to stop funding his program after he refused to work with genetically modified varieties owned by the agrichemical giant BASF. He eschews conventional breeding—which he believes is all about generating bland strains tailored to the needs of corporate producers—for his own method, which prioritizes flavor.

In commercial bakeries, rising time has been winnowed from hours or even days down to mere minutes, thanks to fast-acting yeasts and additives.

Even so, Jones doesn’t buy the notion that the modern breeding he shuns is causing bad reactions to bread. “It’s not wheat itself,” he says, pointing to a 2013 study by the US Department of Agriculture that found “no evidence” of increasing levels of gluten in wheat over the decades. Rather, Jones believes that the true problem with bread is how we make it. In commercial bakeries, rising time has been winnowed from hours or even days down to mere minutes, thanks to fast-acting yeasts and additives. By contrast, the team in Jones’ laboratory, located in a rural stretch along Puget Sound, lets dough rise for as long as 12 hours—and they’ve found that the longer it rises, the less potent the gluten that remains in the finished bread.

As whole-wheat bread has grown in popularity, so has vital wheat gluten use. US gluten imports—mostly from Australia, Canada, China, and Europe—more than doubled between 1997 and 2007, reaching 386 million pounds, and most of that went into baking. Donald Kasarda, a scientist with the USDA, estimates that our annual vital gluten intake per capita has tripled since 1977, from 0.3 pounds to 0.9 pounds—and Jones speculates that people who eat lots of commercially baked whole-wheat products may be getting more than their fair share.

Jones’ conjecture—that modern baking, not modern breeding, is responsible for the mysterious rise in gluten-related troubles—has not been proved correct. But then again, neither has any other explanation. Jones plans to continue his research, but in the meantime, with a test population of one, I conducted my own experiments with Jones’ method. I had drifted away from bread in recent years; it made me feel uncomfortably full. But when I made slow-fermented whole-wheat bread with a sourdough starter from Jones’ lab, I felt great—as I do when I eat loaves made by the increasing number of bakeries that use traditional methods and shun additives. No offense, but that sure beats the gluten-free menu.