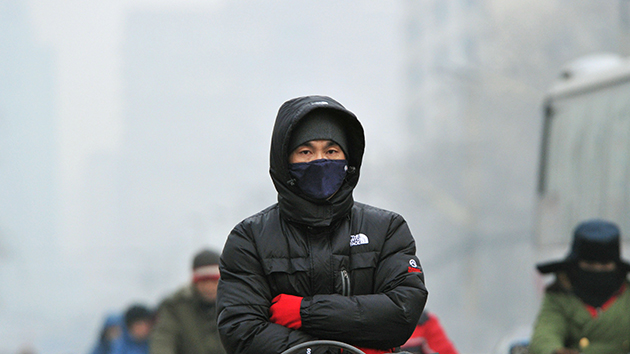 Finally, there might be some good news for people inhaling Beijing’s famously filthy air: It’s getting a bit cleaner, according to a new analysis released by Greenpeace today. Pollution levels in the Chinese capital have shown significant improvements, due in part to strict new pollution controls, says the environmental group, which based its analysis on new government numbers.

Beijing’s concentration of the fine airborne particles known as PM2.5—the toxic brew of industrial exhaust and chemicals that contribute to smog—declined by more than 13 percent in the first quarter of 2015 compared to the same period last year, according to the study. Cities in the neighboring province of Hebei, home to extensive heavy industries like steel production, saw their PM2.5 concentrations decrease by an average of 31 percent. Xi’an, the capital of a major coal-producing province, slashed its concentrations by 48 percent, according to the figures supplied by Greenpeace.

Why such steep declines in pollution over the past year? It’s important to keep in mind how awful the starting point was. 2014 was an especially terrible period for skies across China’s northeastern provinces, resulting in unfavorable comparisons to a nuclear winter. The air got so bad that in March 2014, Chinese Premier Li Keqiang declared “war” on smog. A year earlier, my colleague Jaeah Lee and I traveled to China to investigate its push to develop natural gas, and we saw for ourselves the extent of the environmental catastrophe playing out across the country:

While there’s room for some optimism in the new numbers, the picture painted is still pretty grim: 90 percent of the 360 Chinese cities studied by Greenpeace failed to meet the national air quality standard (that number hasn’t shifted since Greenpeace analyzed similar data from 2014). Forty percent of the cities registered air pollution levels that were twice the national standard. And even in Beijing, there’s a long way to go. The World Health Organization recommends a maximum daily concentration of 25 micrograms per cubic meter of PM2.5. That makes Beijing’s average concentrations of more than 90 micrograms per cubic meter alarmingly high.

Still, it’s a step in the right direction. “I think these trends are very positive,” said Angel Hsu, an assistant professor at Yale University who studies China’s environmental performance. But she warned that any statistics emanating from the Chinese government—the source of the pollution data analyzed by Greenpeace—should be taken with a grain of salt. “When you talk about any Chinese data, you’re always a little bit suspicious,” said Hsu, who was not involved in the Greenpeace study.

Hsu attributes the drop in Beijing’s pollution in part to the new air quality controls—the “most comprehensive to date,” she said—enacted by the city’s government, which placed curbs on vehicle use as part of a $21 billion effort to slash pollution levels 25 percent by 2017. “On the vehicle side, I think that has been potentially driving air improvement in Beijing,” Hsu said.

“The government must now ensure that pollution is not simply relocated to other regions,” warns Greenpeace’s Zhang Kai.

Last month, Beijing shut down the third of four coal-fired power plants inside the city in an effort to clear the air, though Hsu is more doubtful that the drop in pollution levels can be directly tied to reduced coal use: “Perhaps that could also be a source of the drop in PM2.5, but I’m very, very cautious about the coal consumption numbers,” she said, referring to China’s official numbers.

While Hsu said Beijing “can serve as a model for what other cities can do,” she also warned that marginal improvements in one big city could simply be pushing the problem further out into the country, as industry seeks other cities in which to set up shop.

It’s a concern Greenpeace shares. “Armed with this information, the government must now ensure that pollution is not simply relocated to other regions, and that the same strict measures enacted in cities like Beijing are actually enforced across the country,” said Zhang Kai, a Greenpeace climate and energy official, in an emailed statement.

Clean air will continue to be a crucial matter for China’s image on the world stage, as Beijing once again pitches itself as a great place to host an Olympic games—this time, the 2022 winter games. Organizers of the bid recently said $7.6 billion will be spent to fight smog.

Beijing’s reported improvement in air quality comes amid a well-publicized efforts to tackle the problem, directed from the upper echelons of the Communist Party, which sees the pall of smog across the county as a threat to the economy and to social stability for a population increasingly anxious about the environment. Awareness of the problem is on the rise: Under the Dome, a searing documentary about China’s pollution crisis, went viral in March. It attracted hundreds of millions of views before China’s official censors began playing a cat-and-mouse game of trying to ban its various online incarnations.

There’s good news elsewhere, too. Bloomberg reported over the weekend that China has recently scrapped a number of small coal plants, avoiding the release of 11.4 million metric tons of carbon dioxide. That has helped the country cut its emissions for the first time in a decade, according to Bloomberg.