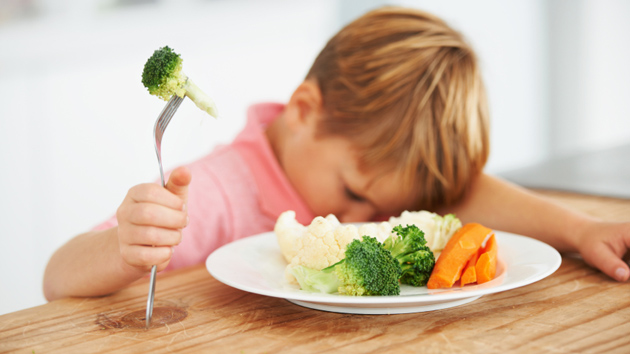 Michelle Obama has gotten a lot of flak for her efforts to improve the nutritional value of school lunches and reduce the rate of childhood obesity. On Twitter, for instance, kids have been using the hashtag #ThanksMichelleObama to complain that new lunch standards she spearheaded have resulted in less appetizing meals.

By some accounts, the First Lady’s school lunch program seems to be working. A 2014 study from Harvard University’s School of Public Health found that compared to 2011, kids eating school lunches were selecting 23 percent more fruit overall after the guidelines were imposed in 2012. What’s more, vegetable consumption per student rose 16 percent. The problem is that the amount of food left uneaten and thrown away seems to have increased considerably, as well. According to a study from the School Nutrition Association, schools reported an 81 percent increase in the amount of food left on plates, with vegetables making up the majority of the waste.

The fact that kids (and many adults) generally don’t like vegetables isn’t exactly an earth-shattering discovery. Parents and policy makers have long struggled over the question of how to get children to eat their broccoli. But Traci Mann, a health psychologist who has spent much of her career studying our eating habits, has come up with a simple solution. “Just put the vegetable in a competition it can actually win,” said Mann on a recent episode of the Inquiring Minds podcast.

Of course, in a contest between vegetables and, say, mac and cheese, the veggies don’t stand much of a chance. But Mann has an elegant strategy for improving the odds. “As far as I can tell,” she says, “the only competition a vegetable can routinely win is the competition between a vegetable and nothing.” Mann first discovered this kernel of wisdom by observing the behavior of her own children. In a Los Angeles deli, when her kids were 3 and 6, she watched them happily consume sauerkraut while waiting for their meals to arrive. “After much scholarly effort,” writes Mann in her newly released book Secrets from the Eating Lab, “I developed a highly technical theory about why they ate the sauerkraut: They ate it because it was there.”

And, being a scientist, Mann decided to put this theory to the test. Using schoolchildren as subjects, Mann and her colleagues conducted two field studies in an elementary school where most of the students were eligible for free or reduced-cost lunches. In one study, the scientists first figured out what the baseline consumption rate was for a reasonably well tolerated vegetable—in this case, carrots. Then, the scientists waited three months for the exact same menu to be served again. This time, as the children waited at their class tables before receiving their full meals, they had access to small paper cups filled with baby carrots. Once the meal was over, the scientists painstakingly weighed all the leftover carrots in cups, on the floor, on trays, and anywhere else they could be found. Sure enough, kids ate more carrots when they were left alone with them at their tables than they did on a normal day. The result, wrote the researchers, was an “increase in carrot consumption of over 430% that was almost entirely driven by many students eating carrots from the cups before entering the line.”

Encouraged by these findings, the scientists then conducted a follow-up field study in which broccoli was the prized vegetable. On a regular day, broccoli was among the foods that the children could select as they went through the cafeteria line. But on the study days, the students were handed cups of broccoli while they waited for the rest of their meal. Once again, the experiment worked. The students as a whole consumed far more broccoli when that was the first food they had access to.

Mann and her colleagues even tested the “veggies first” theory on college students, comparing their consumption of baby carrots and M&Ms while manipulating which snack was offered first. Undergraduates not only ate more carrots when that was the first option, but they also then ate fewer M&Ms.

“For most of us, the main obstacle to eating a vegetable is that we don’t like them as much as the other stuff,” says Mann. And most of us are also pretty lazy. Since vegetables in general require more preparation than many other foods, and are not as tasty, we tend to eat less of them than is good for us.

But there’s an upside to our laziness: If the goal is to limit consumption of an unhealthy food, even a minor obstacle can make a difference. On Inquiring Minds, Mann describes a Dutch study of M&M consumption. “They showed that if you have a bowl of M&Ms on the table right by you, you’ll eat a lot,” says Mann. That’s not surprising. But if you place that bowl farther away, requiring you to get up from your desk to grab a handful, consumption decreases significantly. “Here’s the even more amazing thing,” adds Mann. “Take that same bowl of M&Ms, put it on the same table that you’re sitting at—except instead of right by your hand, put it two feet across the table.” Within-reach, but requiring a bit of stretching. It turns out that you’ll consume just as few M&Ms as if they were across the room.

“I developed a highly technical theory about why they ate the sauerkraut: They ate it because it was there.”

Adding obstacles, even tiny ones, is so effective at reducing unhealthy food intake that even a simple manipulation in Google’s New York offices made headlines recently. When M&Ms were put in opaque rather than glass containers, and healthier alternatives such as figs and nuts were made more visible, Google employees consumed 3.1 million fewer calories from M&Ms over seven weeks, according to the Washington Post.

One of Mann’s experiments shows just how much of an impact the visibility of food can have. In another effort to get school kids to eat more veggies, her team placed photographs of green beans and carrots into two of the compartments on the children’s lunch trays. With this simple manipulation, they found that twice as many kids served themselves green beans and nearly three times as many took carrots, compared with what happened on a typical day.

Mann attributes the success of the photos to the social forces that impact our eating habits. It’s not effective to simply tell a kid to eat his vegetables. But putting photos on the trays, according to Mann, sends the message that other kids are choosing those veggies and placing them in those two compartments. And, as any parent knows, fitting in can be a powerful motivator.

To listen to our full interview with Mann, click below.