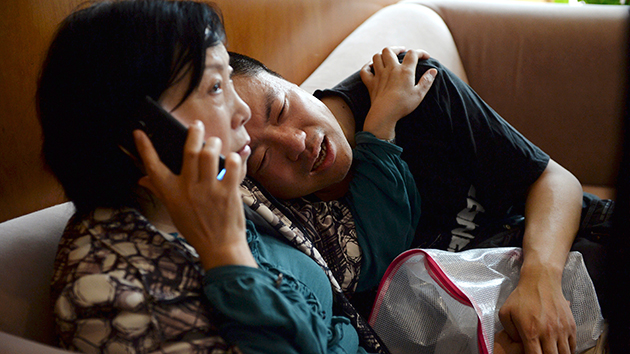 A man waits for news about his missing parents, outside the travel agency that organized the ill-fated Yangtze River cruise. ChinaTopix/AP

UPDATE: Tuesday, June 2, 2015, 11 AM, E.D.T.: At least 14 people have now been rescued a day after a cruise-liner carrying tourists capsized on the Yangtze River, in China, according to Xinhua. More than 400 remain missing, as rescuers struggle with high winds and rain to reach those potentially trapped in the ship’s submerged hull.

The disaster has attracted substantial media coverage in China, but only through sanctioned, state-run news agencies: according to the New York Times, only Xinhua and CCTV, China’s main TV station, have been allowed to cover the rescue mission from the scene. (The Guardian’s Tom Phillips  managed to elude the cordon and has been filing updates from the banks of the Yangtze).

The death toll could surpass the most recent major ferry disaster in the region, when a South Korean boat sank, killing 304 people, mainly high school students. While still relying on heavily vetted media coverage, the response from China’s Communist leaders marks a notable shift from a previous high-profile disaster involving a high-speed train crash near Wenzhou, in 2011, which killed 40 people. That accident led to public outcry about censorship and left the government vulnerable to allegations of an orchestrated cover-up. This time around, the Chinese government has released photos of Premier Li Keqiang being briefed aboard a plane heading to the site, and he toured the scene by boat on Tuesday.

Monday, June 1, 2015 7:47 pm E.D.T.: A passenger boat carrying 458 people capsized and sank on the Yangtze River on Monday, according to Chinese state media. Just eight people have been rescued so far, and 400 remain missing, with rescue efforts being hampered by bad weather, according to Xinhua, the state-controlled news agency. Chinese Premier Li Keqiang is currently heading to the accident site, CCTV has reported. 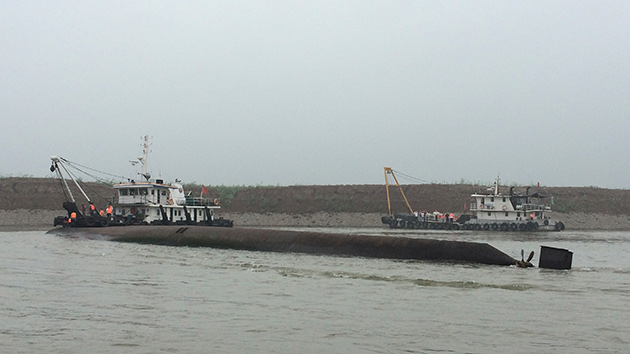 Rescue workers arrive near the capsized ship, center, on the Yangtze River. Local media reports say the ship’s passengers were mainly tourists aged between 50 and 80. Chinatopix/AP

The news was first published by Xinhua just after 6 a.m. local time, more than eight hours after the accident reportedly occurred on what is one of the world’s largest and busiest rivers; passenger ferries, as well as all manner of commercial barges, are common on the Yangtze. The boat was en route from Nanjing to Chongqing, a megacity in southwest China. According to the news agency, the rescued captain and chief engineer said the vessel had been caught in a “cyclone.” (Official weather predictions for the area indicated the risk of short-term severe precipitation, thunderstorms, or gales.) 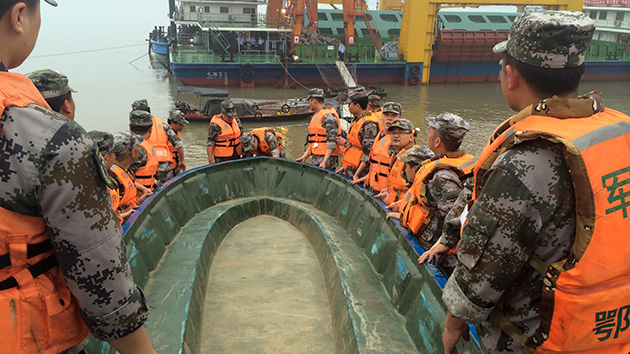 Rescue workers prepare to head out onto the Yangtze River. More than 1,000 police officers have been deployed, according to Xinhua. Chinatopix/AP

A conflicting initial report carried by CCTV America, the US-targeted branch of the state-run TV station, put the time of the accident at 11 p.m. local time, an hour and a half after the Xinhua report.

State news media says the boat, known as the Eastern Star, was carrying 405 Chinese passengers, 5 travel agency workers, and 47 crew, and could carry a maximum of 534 people.

A tugboat capsized on the Yangzte in January, killing 22.

Below is a video posted by New China, Xinhua’s social media division:

This post has been updated with photos and video from the scene.