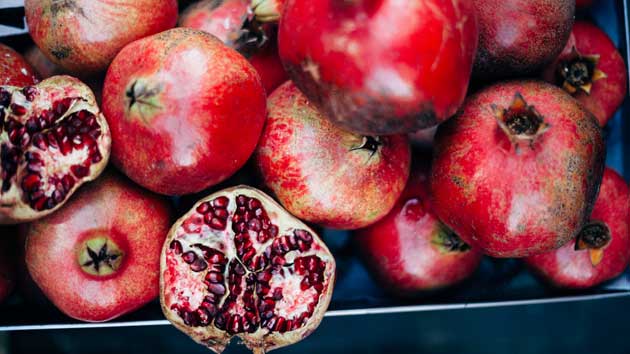 On July 20, California’s resources board fined a farming district near San Francisco $1.5 million for illegally diverting water to feed its rows of corn, tomatoes, cherries, and almonds. The Golden State, of course, continues to suffer from a dramatic drought, and many farmers face restrictions on pumping and diverting local supplies of water.

But national demand for California’s fresh fruit and veggies continues at a steady pace. What’s a thirsty farmer to do?

One simple solution looks a little like Greece’s austerity measures: Give each plant less water. A team of USDA scientists is exploring what happens after treating plants to a round of “deficit irrigation,” or the reduced application of H2O.

But they seem to have stumbled on a rare piece of good drought news: Early findings suggest that after undergoing deficit irrigation for two years, parched plants can produce the same or even higher quality fruit.

In a study (PDF) focused on Wonderful variety pomegranate trees, a team of researchers including Tiziana Centofanti and USDA soil scientist Gary Banuelos applied as little as 35 percent of the normal amount of moisture to the crop for two years. The resulting pomegranates were smaller, and more of them cracked. But in terms of the fruit’s levels of antioxidants—compounds with health benefits above and beyond nutrition—”no significant differences were observed,” wrote the researchers.

Farmers are paid by the pound, so growing smaller peaches means earning less.

California farmers grow around 30,000 acres of pomegranate trees each year. The USDA deems the plant “extremely drought tolerant,” so it’s no huge surprise that the researchers’ fruit proved hearty in times of duress. Yet other fruit varieties—like grapes and peaches—also seem to benefit in some ways from a drier diet. Preliminary results from an experiment Centofanti just completed on Crimson seedless and Sugarone variety table grapes in Delano and Mecca, California, reveal that giving the vines 25 to 50 percent less water yields darker, sweeter, and smaller grapes.

Faced with dwindling groundwater supplies this year, California peach farmer David “Mas” Masumoto experimented with watering parts of his orchards 30 to 50 percent less. His Gold Dust peaches were punier but brimming with flavor, “probably the most intense I’ve ever had,” he told the LA Times. “I realize all these years I’ve been pumping them up with fertilizer and water to try to get them artificially big.” Masumoto and his daughter Nikiko have launched a social media campaign they’re calling #SmallFruitRevolution to try to inspire consumers to support these types of conservation experiments.

Therein lies the rub: Reducing water tends to create undersized fruit. “You’re producing a leaner machine,” explains Banuelos. Farmers are paid by the pound, so growing smaller peaches means earning less. Even if they get a more flavorful bounty, they’d have to “look for a niche market to sell that product. That’s another layer of complexity for that farmer,” says Banuelos.

Farmers also tend to manage their watering intensively in order to boost yields. Chris Gertz, a fourth-generation stone fruit farmer from the Central Valley, says he tries not to overwater his fruit trees, because starving them makes the fruit sweeter. But he doesn’t want to underwater them for fear of crippling the plant’s future production. It’s a balancing act between flavor and “what’s going to sustain your tree for the next year. The new growth of the tree this year is next year’s crop.”

In the short term, the pomegranate trees in Centofanti and Banuelos’ study yielded roughly the same number of pomegranates. But they warn that more research is needed to determine the long-term effects of deficit irrigation.

Yet Banuelos argues that it’s a no-brainer solution for California’s current predicament. “We might not need to practice deficit irrigation forever, but during these troubled times—it might be needed to survive.”