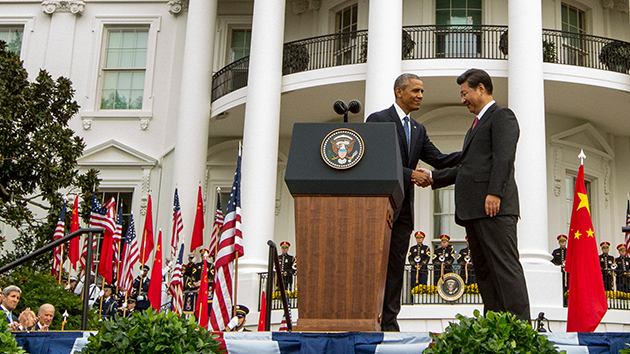 President Barack Obama shakes hands with Chinese President Xi Jinping after a ceremony at the White House on Friday.Andrew Harnik/AP

China followed up its promise Friday to create the world’s largest cap-and-trade program with yet another significant climate policy announcement: It will commit to spending $3.1 billion to help developing countries slash their greenhouse gas emissions and adapt to climate change. China’s financial commitment, along with its new carbon market, are part of a comprehensive package of climate measures to be announced at a joint press conference featuring US President Barack Obama and Chinese President Xi Jinping on Friday in Washington, DC.

The new pledge, emerging from high-profile bilateral talks between the two countries, “is a game changer in international climate politics,” says Li Shuo, a climate policy analyst for Greenpeace. “It is a drastic increase from China’s previous finance commitments.”

“In terms of scale, 3.1 billion USD could even surpass the US pledge to the Green Climate Fund, which still faces a significant battle in the US Congress,” Li said in an email.

Last year, Obama pledged $3 billion to the United Nation’s Green Climate Fund during a G20 meeting in Brisbane, Australia. That pledge followed a landmark climate deal forged last year between the United States and China that set the stage for today’s agreement.

But Obama’s commitment to the Green Climate Fund still faces stiff opposition at home from congressional Republicans who have vowed to block the White House’s first funding request of $500 million. Sen. James Inhofe, who chairs the committee on the environment and public works, has said he will do everything in his power “to prevent $3 billion in taxpayer dollars from going to the Green Climate Fund, where the money will be spent by unelected UN bureaucrats to dictate U.S. policy and hinder developing countries’ ability to aggressively address the economics of poverty.”

On Friday, China will also commit to controlling public investment flowing into high-polluting industries, both domestically and internationally, according to the briefings received by Greenpeace, signaling a top-down response in a country that exerts an enormous influence over the direction of markets.

Of course, there is much we still don’t know about China’s plans, including which projects the new multi-billion dollar pledge will end up financing, says Billy Pizer, a fellow at the Nicholas Institute for Environmental Policy Solutions at Duke University, who recently returned from a climate conference in China. “There’s all these accounting questions. First: ‘What counts?’ Then: ‘How do you add the numbers up?’ It’s hard to know exactly what $3.1 billion means until you know the details.” For climate economists, “There’s no consensus around those things,” he said.

But Pizer is confident that such a high-profile announcement will help change the game for climate negotiations in Paris later this year. “It does create momentum, and puts more pressure on other countries to take action, and removes some arguments they might be using for not acting,” he said. He added that Friday’s deal is “enormous in terms of the signal it sends to business and others investing in technology that the world has changed.”