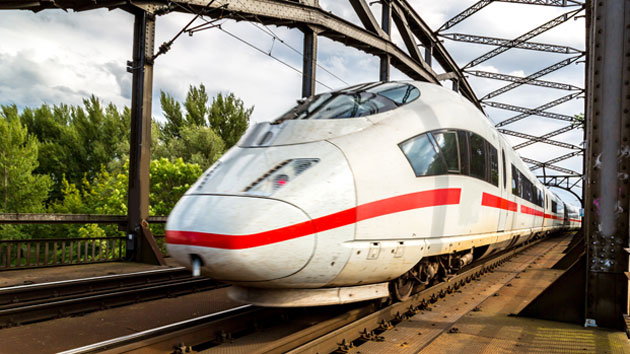 This story was first published by Grist and is reproduced here as part of the Climate Desk collaboration.

Riding the high-speed train between Berlin and Hamburg, Germany’s two largest cities, is a radically different experience from riding its American counterpart, Amtrak’s Acela, which connects major East Coast cities. Germany’s InterCity Express (ICE) ride is as smooth as a Mercedes on the Autobahn. The conductor comes around politely offering to bring you coffee. The bathroom doors open electronically with the push of a button for disability access. There’s no perennial stopping and starting of the train, no grumpy barking conductor, no herky-jerky rolling of the bathroom doors, none of Amtrak’s chronically late arrivals. And on German trains, the wifi actually works.

At 45 euros each way, roughly $50, it isn’t cheap. But it’s cheaper than Amtrak. Berlin to Hamburg is 179 miles, which is about the same distance as New York to Baltimore. The regional Amtrak for that trip, booked about two weeks in advance, costs $77 each way and takes 40 minutes longer than the German trip. The Acela is $150 and still takes 20 minutes longer.

California is the only place in the US where high-speed rail (HSR) plans are really moving forward, albeit not that quickly or smoothly. The state is currently building a 520-mile high-speed line from San Francisco to L.A., which will eventually extend to Sacramento to the north and San Diego to the south.

The German Marshall Fund put out a report in June on the lessons California could draw from the well-developed HSR systems in Germany and France. Most of the different points it lays out boil down to one essential, overarching approach: Make HSR central to a larger transportation system that includes other alternatives to driving and is focused around smart growth. Successful high-speed rail requires more than just laying tracks between cities and buying fancy new rail cars.

Specifically, the report warns against putting stops in sparsely populated areas because that slows trains down. Put them only in the center of major cities, recommends report author Eric Eidlin, as Germany has done. The ICE train, for example, makes no stops during the two-hour journey between Berlin and Hamburg. France, on the other hand, has often dispersed train stations around the urban periphery and the result, Eidlin notes, has been not just slower trips but less efficient connections to other modes of transport. “California should carefully consider the economic development and access challenges that French cities such as Aix-en-Provence and Avignon have experienced with exurban and peripheral stations,” Eidlin writes. “Thankfully, California has made the wise decision of siting most HSR stations in central cities. However, one notable exception to this is the proposed Kings/Tulare station east of Hanford, which would be located in an exurban location.” Also, the Milbrae and Burbank station locations will be in less accessible areas.

If building an HSR station in a suburb or smaller city is absolutely necessary, the groundwork should be laid with a new mass transit hub around it. Eidlin also recommends that wherever stations are built, cities should encourage new housing, retail, and office development. One big advantage of trains over planes is that they get you right into the city center instead of to an airport out on the periphery. California should capitalize on that advantage by making the areas around HSR stations even more dense, developed, and connected. “The California HSR line could be a boon for a number of smaller cities located in California’s Central Valley with untapped economic development potential, including Fresno and Bakersfield,” Eidlin writes. “With careful economic development and land use planning in these Central Valley cities in anticipation of HSR, they stand to benefit greatly from being better connected to the state’s major economic poles.” 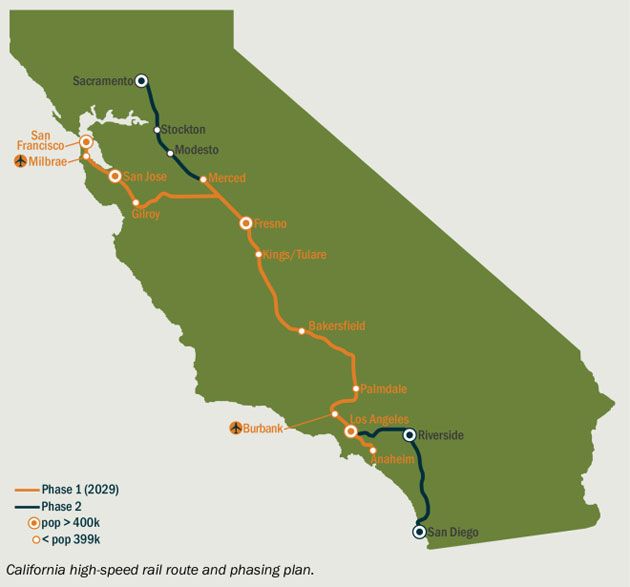 One difference between German and American train travel is what you see out the window. On Amtrak’s Northeast corridor route, you can spend seven hours traveling from Boston to Washington, D.C., without ever passing a farm. Each city’s suburbs bleed into the next. When leaving Berlin, on the other hand, in less than half an hour you’re whisked from the capital’s center to cornfields and cow pastures. This reflects not just the train’s speed but the absence of sprawl in Germany. The suburbs—a handful of detached houses with pitched roofs, many featuring solar panels—whiz by in a few minutes. Despite, or perhaps ironically because of, Europe’s greater density, you are far closer to the countryside when in a major city. There is no equivalent to the US’s unending hellscape of highways, strip malls, fast food drive-thrus, and auto body shops. Europeans’ cities were more built up before the car, and they didn’t then tear their cities apart to accommodate cars and facilitate sprawl, as we did. The US is so vast that we could pave everything within 200 miles of New York City and still have more than enough land for our corn and cows. But if Europeans wanted to preserve rural areas, they would have to use urban space more efficiently, and so they have. A much greater share of the typical European metro area’s population is concentrated in its inner city. So you get dense, transit-rich cities with countryside in between.

You cannot build a high-speed rail line to nowhere and expect it to attract enough passengers to be economically feasible. Many US cities, by sprawling over everywhere, are in a sense nowhere. Or, in Gertrude Stein’s famous phrase about Oakland in the 1930s, “There is no there there.” West Coast cities in particular sprawl outward in so many different directions, with so little mass transit, that arriving at a downtown station won’t make it easy for you to get to your ultimate destination unless you rent a car upon arrival. L.A. and San Diego do not have the extensive subway systems of Hamburg or Berlin.

For high-speed rail to fulfill its potential, it must be one component of a low-carbon society. L.A. and San Diego need to become more like Berlin and Hamburg—and San Francisco and New York. That means being denser, with walkable and bikeable streets, public transit systems, and regional commuter rail lines to the suburbs. That would allow people to arrive in town on the train and hop on a bus or subway, or hail an affordable taxi, to get to their final destination and then get around while they are in town. L.A. is working on that, and other California towns and cities should too. Or, as Eidlin puts it in his report, “In order for HSR to deliver on its promise to 38 million Californians and investors, the project must be designed as the backbone of a comprehensive system for sustainable passenger mobility in California.”

Making trips by high-speed rail results in much lower carbon emissions than driving a car or flying. But another great thing about rail is that it works together with local transit systems to eliminate car trips once you’ve reached your destination city. California’s San Francisco-to-L.A. line is due to be completed in 2028, which is, unfortunately, still a long time off—but that gives cities along the route plenty of time to build up the neighborhoods and transit around their stations. If they do, it will be more than just good for the environment, but good for their economies too.