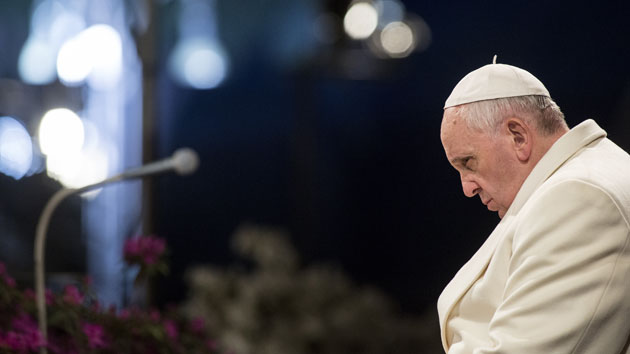 The story was originally published by the Guardian and is reproduced here as part of the Climate Desk collaboration.

When the US supreme court legalized same-sex marriage in June, the leader of America’s Catholics erupted in white-hot fury, condemning the historic decision as “a tragic error.”

When a week or so earlier it fell to Archbishop Joseph Kurtz, as leader of the US Conference of Catholic Bishops, to deliver the official welcome to Pope Francis as he issued his sweeping indictment of the global economic order and its effects on the poor and the environment, the response was several degrees cooler.

Activists from the Catholic Church and other faith traditions are preparing a vast mobilization around the pope’s visit this month, culminating in a vigil and September 24rally on Washington’s Mall where they are hoping to draw crowds of 300,000. But they described a disconnect between the enthusiasm of community groups and the patchy response from the church leadership.

“I think Francis would be disappointed by the lack of urgency in the response of most American bishops. This isn’t just a letter to be read, but a call to be acted upon,” said Christopher Hale, director of Catholics in Alliance for the Common Good. “To date, the American Catholic Church has yet to answer that call in a meaningful way.”

It is hard to divert leaders of the Catholic Church in the US from their preoccupations with private lives—marriage, reproduction, and abortion—and persuade them to take up the very public cause Francis is seeking to ignite with his denunciation of capitalism and inequality, campaigners said.

“This isn’t just a letter to be read, but a call to be acted upon. To date, the American Catholic Church has yet to answer that call in a meaningful way.”

“I think a lot of bishops have difficulty talking about something like climate change,” said Lonnie Ellis, the associate director of the Catholic Climate Covenant, which has been working with the church leadership to mobilize around the encyclical and the pope’s visit. “It hasn’t sunk in yet that climate change is a tremendous moral issue that is hurting people around the world right now. That is going to take a little bit of time to sink in.”

Despite the excitement among campaigners about the pope’s call for action, within the USCCB, private concerns continue to claim a far greater share of church funds and resources than fighting climate change. Under the USCCB banner, there is an entire department devoted to fighting abortion and same sex marriage rights. There is only a single staffer working full-time on climate change.

“For some bishops absolutely the priority is abortion. Every other issue is relativized,” said Michael Sean Winters, a commentator for the National Catholic Register. “There is no ambiguity in the church position on abortion.”

But only a handful of bishops have come out in strong support of the papal encyclical—and those statements do not go as far as the denunciations of abortion rights and same-sex marriage rights.

“It hasn’t sunk in yet that climate change is a tremendous moral issue that is hurting people around the world.”

Thomas Tobin, the conservative bishop of Rhode Island, greeted the supreme court decision by advocating conscientious objection on same-sex marriage. When it came to the papal encyclical, however, he was positively curt, confining his response to three sentences. “The pope’s message deserves careful study and prudent discussion by Catholics and all those concerned about this issue,” Tobin concluded—hardly a call to action.

Only a few church leaders have gone so far as Richard Pates, the bishop of Des Moines, who held a press conference by a wind turbine and publicly called on presidential candidates to drop climate denial, or Blaise Cupich, the Archbishop of Chicago, who co-wrote an opinion piece with the head of the Environmental Protection Agency urging action on climate change, and has pledged to green all 2,700 church properties in his diocese.

Other bishops, notably in California and the Southwest, have also come out strongly in support of the pope. The Archbishop of Atlanta drafted a detailed action plan, with energy audits and solar installations for poor neighborhoods.

But that’s still not enough for some campaigners within the church who have sought to use the encyclical and US visit this month to spur action on climate change.

“In the Philippines, Brazil, Ecuador, in countries all around the world, Catholic bishops have taken the lead and issued statements, urging action, and preaching every Sunday at mass. When you compare what is happening in those countries to what is happening here I have to say it is pretty sad and disappointing that they haven’t done more,” said Patrick Carolan, who heads the Franciscan Action Network, which campaigns for social justice. “I wish the USCCB would spend a lot more money on getting the message out.”

Some US bishops may just be uncomfortable with Francis, whose radical message is rooted in his own experiences of poverty and inequality in the global south, especially those in conservative parts of the country.

“I think that the Catholic Church is making giant strides. I think they are also walking a line between where many of their constituents are and what the Vatican is saying,” said Evan Berry, professor of religion and philosophy at American University and author of Devoted to Nature, about the religious roots of the US environmental movement.

“For some bishops absolutely the priority is abortion. Every other issue is relativized.”

The implications of that partisan divide were especially clear when prominent Republicans—and fellow Catholics—Jeb Bush and Rick Santorum bluntly told Francis to steer clear of public life, even before the release of the encyclical.

Church leaders in liberal areas, where they might not face opposition from conservative parishioners, might find it easier to come out strongly in support of Francis, he said. So would bishops and priests in areas with large Latino communities, Berry said.

Some of the most forceful responses to Francis’ letter have come from bishops in California and the Southwest.

“I think it’s a lot easier to come out in support of progressive policies on climate change if you are the Archbishop of Los Angeles, Seattle, Santa Fe, or Miami, than if you are the Archbishop of Cleveland or West Virginia,” Berry said. “If you are the bishop of a major city or an entire state you are going to want to maintain good relations with politicians in your area so that you can advocate on behalf of your constituencies. If you are in a state like Kentucky or Ohio, it would be pretty difficult to throw your whole weight into an issue like climate change when you have equal concerns about schools or hospital funding or hunger.”