Teflon, the chemical that coats nonstick pans, is making news again: On Wednesday, an Ohio jury awarded 59-year-old Carla Bartlett $1.6 million after deciding that chemical giant DuPont contaminated Ohio Valley drinking water and contributed to Bartlett’s kidney cancer. Bartlett is one of 3,500 Ohio and West Virginia residents suing the company over claims that the company made them sick after years of dumping C8, the chemical used to produce Teflon, into the Ohio River.

Dozens of studies have linked Teflon’s main ingredient and similar chemicals to all sorts of health problems, from kidney and testicular cancer to increased risk of miscarriages.

C8 is in a chemical family called PFCs (perfluorinated chemicals)—the same water- and stain-proofing class of chemicals used to make rain gear, pizza box and popcorn bag liners, stainproof upholstery treatments, and those waxy slips that hold pastries at cafes. Dozens of studies have linked PFCs to all sorts of health problems, from kidney and testicular cancer to increased risk of miscarriages. (3M phased out the chemical from production in 2002 due to potential health hazards.)

In closing remarks on Tuesday, lawyers for the plaintiffs claimed DuPont showed “conscious disregard” by concealing the health effects of C8. But DuPont lawyer Damond Mace countered, “Just because C8 is capable of causing kidney cancer doesn’t mean it caused Mrs. Bartlett’s cancer.” The company is expected to appeal.

This isn’t the first time that C8 has led to litigation: DuPont was fined $16.5 million by the Environmental Protection Agency in 2005 for failing to report findings from previous studies showing the health hazards of C8. In 2005, DuPont settled a multiyear class-action lawsuit on behalf of 70,000 Ohio and West Virginia residents for contaminating drinking water with C8.

PFC contamination may not be isolated to the Ohio Valley. According to an Environmental Working Group (EWG) report that uses recent EPA data, C8 has been found in the drinking water in 94 counties serving more than 6 million Americans. (An interactive version of this map is available here.) 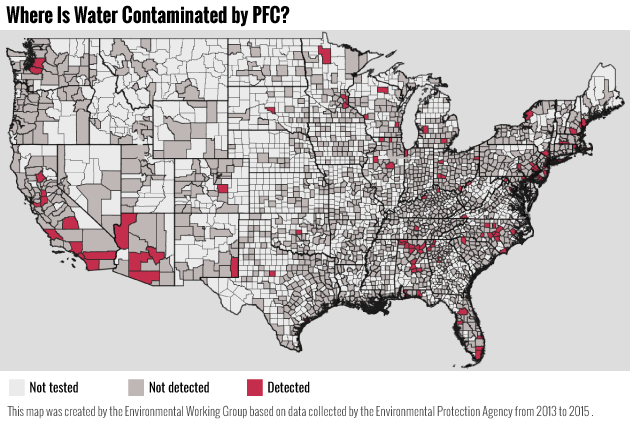 The EPA is in the process of investigating C8’s health effects; in the meantime, it has set voluntary C8 safety standards to be used by utility companies. But dozens of studies suggest the voluntary limits set by the EPA are far too high. New literature suggests a more appropriate safety level is 400 times smaller than the level used by the EPA.

Though the agency has yet to set a strict PFC limit, it started testing drinking water for the chemicals in 2013. According to their findings, shown in the map above, 94 counties in 27 states have PFCs in drinking water, most of which below the EPA’s provisional standards but several times higher than the levels recently proposed by scientists.

Earlier this year, more than 200 scientists co-signed a statement in the journal Environmental Health Perspectives encouraging consumers to avoid new types of PFCs, which have replaced C8 in many nonstick, stainproof, or waterproof items but appear to have similar health effects.

Nancy Stoner, the EPA’s acting water chief, recently told Inside EPA that the agency expects to have come to a decision about an appropriate C8 drinking water standard “within the next 5 to 7 years.”

“We’re talking about 20 years from the point where this first became a major public health concern until the EPA is going to get to the point of deciding should we regulate this or not,” says Bill Walker, the lead author of the EWG report. The products are ubiquitous enough that one can’t realistically expect to avoid them, he says. “What we’re really talking about is a broken system that allowed these chemicals to be used in hundreds of thousands of products without adequate safety testing.”