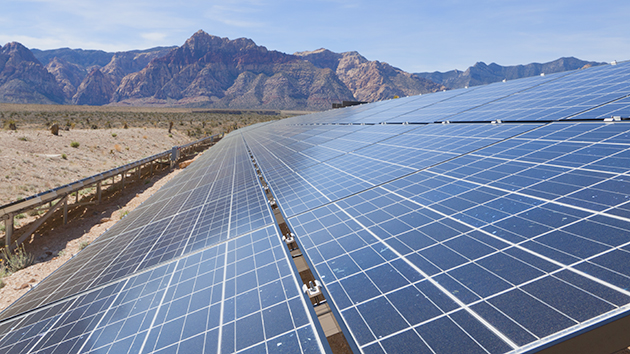 The desert in Southern California could be in for a climate-friendly makeover, after the Obama administration released its plans to develop more renewable energy projects on federally owned land.

On Tuesday the Interior Department released the final version of a plan that would open up about half a million non-contiguous acres—half the size of Rhode Island—for projects such as wind and solar farms in the Mojave Desert and surrounding areas. It would also more than double the amount of land dedicated to protecting delicate desert ecosystems that are home to vulnerable species, including the desert tortoise.

The plan will open up about half a million acres—half the size of Rhode Island—for projects such as wind and solar farms.

The Mojave Desert, which stretches across most of Southern California, is a potential gold mine for clean energy. Earlier this year, the world’s largest solar farm opened there, near Joshua Tree National Park. According to Interior, the desert and the its surrounding area have the sun and wind potential to support 20,000 megawatts of renewable projects, about equal to the amount of solar energy installed nationwide today. In announcing the plan, Secretary of the Interior Sally Jewell said that public lands will “play a key role” in helping the United States meet its goal of procuring 20 percent of its electricity from renewable sources (excluding large hydro dams) by 2030—up from about 7 percent now.

But over the past few years, efforts to develop all that potential have sparked clashes between clean energy buffs and conservationists who don’t want to see pristine landscapes blanketed by vast arrays of solar panels. One pioneering project, the Ivanpah Lake solar farm, became a pariah after environmental groups said that it encroached on tortoise habitat and that its sunlight-concentrating panels were blasting superheated rays into birds’ flight paths and killing tens of thousands of them. Subsequent estimates put the death toll much lower, but the Ivanpah controversy underscored just how hard it can be for government planners to find common ground between competing environmental interests.

The new plan (finalized in October but made public Tuesday) is meant to clear the air by painstakingly analyzing a 2 million-acre swath of Southern California and offering a comprehensive take on where to focus clean energy development. Scientists and planners from a host of agencies stockpiled research on wildlife, water, agriculture, historic and cultural sites, and other features in an effort to find spots that have high renewable energy potential with minimal environmental impact.

In the map below, the pink and red areas are where the Bureau of Land Management recommends that private developers focus their efforts. Orange and blue hatching shows areas proposed for conservation: 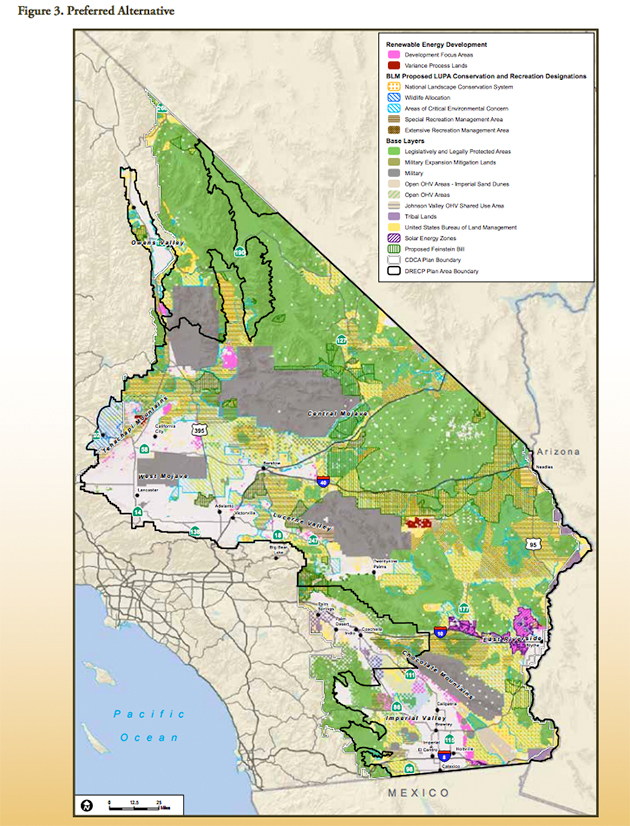 Anyone who wants to build a wind or solar farm in these areas still has to go through the normal permitting process that any development on public land has to clear. But the plan is meant to help developers avoid headaches by showing them the areas that the feds have already decided are either not ecologically sensitive, or that are already too degraded to worry much about building in. That’s a departure from the previous modus operandi, in which federal officials made case-by-case decisions on each proposed project.

“It’s a real change from how BLM has approached renewable energy development in the past,” said Erica Brand, California energy program director at the Nature Conservancy. The agency, she added, is “protecting desert landscapes by directing development to areas that are more degraded.”

“The [Mojave] Desert has some of the most intact natural landscapes in the lower 48,” Brand said. “As we transition to cleaner energy sources, and work to meet our climate goals, we also have to keep those natural resources intact.”