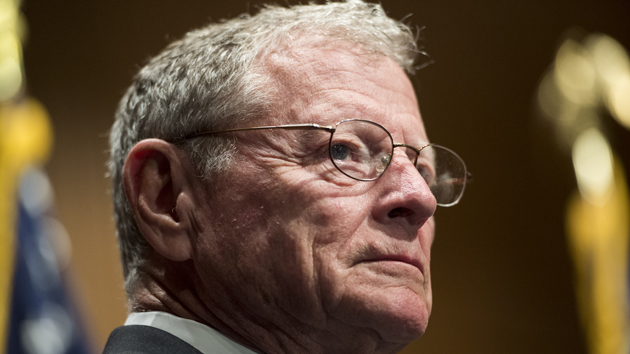 Sen. Jim Inhofe (R), chairman of the Senate Environment and Public Works committee, gloated in a seven-minute video that the Paris talks would fail.cqpho/AP

Monday began what’s supposed to be the final week of the climate talks, the one where top-level negotiators hammer out an accord to stop the deadly march of global warming. To troll this momentous event, the climate change deniers at the Heartland Institute came all the way from Chicago to stage a “counter-conference” at a central Paris venue called, seriously, the Hotel California.

I don’t know much about what happened on that dark desert highway, in part because journalists with the climate advocacy site DeSmogBlog were kicked out before the session began. Heartland’s Jim Lakely told me DeSmogBlog engaged in “overt advocacy.” Kyla Mandel, one of the two bloggers booted, responded that he’s probably referring to them having told other journalists that Heartland has received funding from ExxonMobil. (Lakely didn’t elaborate.)

A few reporters briefly noted the “counter-conference” and moved on, which is the attention it deserved. While there are intense arguments about how to address climate change, there is no real debate among scientists about the core facts: Human contributions to the greenhouse effect are making the Earth hotter, which is bad for life. We can already see it happening, and pretty much the only people still clinging to denial live in well-off, English-speaking countries, primarily the United States. Which is probably why the denial event drew such a paltry crowd—organizers say a multiple of 20—compared to the thousands at anti-carbon emissions protests in the city and tens of thousands at the 196-party United Nations conference here.

And yet, at the real conference on Monday, it became clear that there are important reasons not to ignore that small, well-funded American faction entirely. For all the worldwide agreement on global warming, this week’s negotiators are hashing out the thorny issues of what should be done, by whom and when. Big fights include who will pay for existing and future damage and how to make sure that countries live up to all the promises they’ve made and will make this week.

Major players, including the European Union, have said for a long time that it is crucial for the agreement to have binding legal force. Yet today, a top EU negotiator, Spain’s Miguel Arias Cañete, signaled that it’s giving up that fight. The reason he cited was the US GOP.

“We understand the concerns they have because of the political situation in the Congress and the Senate, and the position of the Republican Party,” Arias Cañete, who is the European Commissioner for Climate and Energy, told reporters. “You cannot make an important agreement in climate change if the second-biggest emitter of the world is not on board. We have to find a solution.”

“You cannot make an important agreement in climate change if the second-biggest emitter of the world is not on board. We have to find a solution.”

In short, climate negotiators here know better than anyone that the Republican Congress will not approve any climate change deal President Barack Obama puts in front of them. They won’t approve a deal that requires the United States to cut its emissions. They won’t approve a deal that legally binds the United States to pay anyone else money. So far, they haven’t approved a penny of the $3 billion the US has already pledged to the Green Climate Fund, the core financial mechanism that is supposed to help countries prepare and respond to climate change.

The president of the Paris talks, French Foreign Minister Laurent Fabius, already said over the summer that avoiding US Republicans was going to have to be a key strategy at the talks, which would rule out a legally binding treaty. The Obama administration officials here have stressed repeatedly that they are pushing for some peripherally legally binding elements to be included in the deal, but those will concern things like accounting rules and reporting requirements, not the core issues of stopping global warming and paying for its repair.

About an hour after Arias Cañete spoke on Monday, lead US negotiator Todd Stern played down the role US politics were playing in the talks. “You sometimes get questions about where we think things are going to go in the future—of course we don’t know,” he said. “But if I think about all of the many, many meetings I’ve had—bilaterals, plural-laterals, etc.—US politics is not really coming up.”

Still, that shadow hangs. One of the new arrivals at the talks on Monday was National Oceanic and Atmospheric Administration chief Kathryn D. Sullivan, who came to participate on side panels presenting US data on coastal effects, and the link between climate, energy, and food. But while she’s here, Sullivan also has to spend time dealing with a subpoena issued by Rep. Lamar Smith, a Texas Republican who chairs the House Committee on Science, Space, and Technology. Smith is investigating a peer-reviewed study published by NOAA experts in the journal Science dispelling earlier analyses that suggested global warming had slowed since 1998—busting a key talking point used by climate change deniers.

The scientists “were not motivated or influenced by any political process,” NOAA spokeswoman Ciaran Clayton said by email. “Since the publication of that paper, numerous other peer-reviewed published studies have supported the findings. Data—from sea surface temperatures to land surface temperatures to satellites—all show that the air temperature at the surface of the Earth is warming.”

“You’re doing the Lord’s work, and we’re going to win this thing together.”

Smith’s committee has asked for internal emails and documents related to the study delivered no later than December 15. The talks are scheduled to end just four days before that, assuming they don’t run over time. Clayton said the agency is currently reviewing the request.

Of course, just like with climate change itself, there are always multiple related factors at play. While US officials at the conference are probably loathe to say publicly that far-off Republicans are having an effect on the conference, they may also be playing a bit coy if they are bringing up the specter of Congress, as Arias Cañete suggested. From my years covering humanitarian aid and post-disaster donors conferences, I can tell you that US administrations need no help from the opposition when it comes to seeking to avoid firm monetary commitments and tough reporting requirements.

Nor is the United States alone in that regard. Some Europeans may well privately breathe a sigh of relief if the expected agreement becomes easier to finesse. Arias Cañete, who hails from a conservative Spanish party himself, has spent much of his career fighting off accusations of conflicts of interest due to his substantial oil-company holdings.

In any case, whatever officials here say publicly, climate change deniers seem confident they’re having an effect on the deal, and by extension the future of the planet. One of the speakers we know about at the Heartland conference was Sen. Jim Inhofe, the chair of the US Senate Environment and Public Works committee, who gloated in a seven-minute video that the Paris talks would fail.

“Nothing’s going to happen,” the Oklahoma Republican—who over his current term has received $750,000 from the energy industry, primarily oil and gas—said, smiling broadly at the small crowd gathered in the Hotel California. “Just keep it up. Our progress would not have happened without you. You’re doing the Lord’s work, and we’re going to win this thing together.”