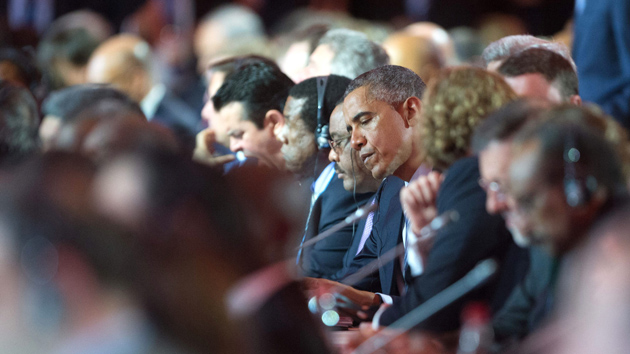 This story originally appeared in Wired and is reproduced here as part of the Climate Desk collaboration.

The Paris climate talks are not really happening in Paris. By train, the commune of Le Bourget is about 45 minutes from the Eiffel Tower, the Seine, or a stroll through the Luxembourg Gardens. (It is, after all, unseasonably warm.) That train passes beneath two beltways to get to the the outer ring of Parisian suburbs.

At Le Bourget station, green-vested volunteers smile and direct new arrivals to a herd of free shuttles in the ad hoc bus corral. Sunday morning, downtown Le Bourget is semi-busy and quasi-shuttered. The commune’s main avenue has a notable number of pizza shops, and quartets of cops huddle together like Doo Wop groups on every other corner. After about 10 minutes, the shuttle arrives at Paris-Le Bourget, France’s oldest commercial airport and temporary home of the so-called Paris climate talks.

Because it is Sunday, the meeting is catching its breath. The first week was a carnival of climatic sermons, aspirant politicking, themed events (Forests Day! Farms Day! Action Day!), and a sideshow of sustainability. Behind the scenes, journeymen negotiators from 196 nations were piecing together a draft of the succinctly-named Paris Outcome, the meeting’s culminating document. Starting Monday, the top level ministers—your John Kerrys, Laurent Fabiuses, Edna Molewas, Susheel Kumars, and Xie Zhenhuas—take over, to massage the draft into a global climate accord.

That draft (pdf) is 42 pages long, and about 25,000 words complicated. Brackets surround words and phrases that countries are arguing over. If those brackets are proxies for arguments-to-be-had, that means over 900 arguments will take place in Le Bourget from December 7 through 11.

More than 900 arguments will take place in Le Bourget from December 7 through 11.

“The process from here will be forming groups of ministers to represent different geographic regions,” says Jennifer Morgan, global director of climate programs for the World Resources Institute. In other words: committees for arguing.

What makes Paris so special is that most of the countries participating have already submitted documents outlining the kinds of cuts they are willing to make to reach the overall goal, cutting greenhouse gas emissions such that the world’s temperature does not increase by 2 degrees Celsius (3.6 degrees Fahrenheit). “For the first time we’ve had countries registering ahead of time with their Intended Nationally Determined Contributions,” says Rachel Cleetus, lead economist and climate policy analyst for the Union of Concerned Scientists. That means the hypotheticals that negotiators are pushing back and forth aren’t as hypothetical as they usually are. To invoke an old Rumsfeldism, the known unknowns outnumber the unknown unknowns.

In fact, negotiators know roughly how far away they are from that 2 degrees C goal. Right now, best estimates range from Not Very Close (2.7 degrees C/4.9 degrees F) to Pretty Far Off (3.5 degrees C/6.3 degrees F).

Not one single person knows the Draft Paris Outcome’s ultimate fate. Between today and December 11—possibly the early hours of December 12—it will get emailed, printed out, graffitied with edits. As Morgan puts it, the whole document is in brackets. “Nothing is agreed until everything is agreed in the UN,” she says.

Failing to meet the 2 degrees C goal would be bad, but it wouldn’t necessarily mean Paris—rather, Le Bourget—failed. Any sort of agreement in which every country agreed to significantly cut its emissions would be successful compared to failures in Copenhagen, Rio, and the 17 other COP meetings since Kyoto. The Paris-as-trajectory goal is that the negotiations will land close to 2 degrees C, and the countries will also agree to regularly review their commitments (every five years would be nice), and implement course corrections.

The counterargument to that diplomatic optimism is that Paris is Earth’s last stand. The climate crisis is already happening, and the actions that will end it need to begin now. Countries both rich and poor will have to shake their carbon addictions. Paris will have to truly become, as the writer Michael Simkins once described it, “A place in which we can forget ourselves, reinvent, expunge the dead weight of our past.” Hopefully Le Bourget is close enough to the city’s center to live up to that hype.