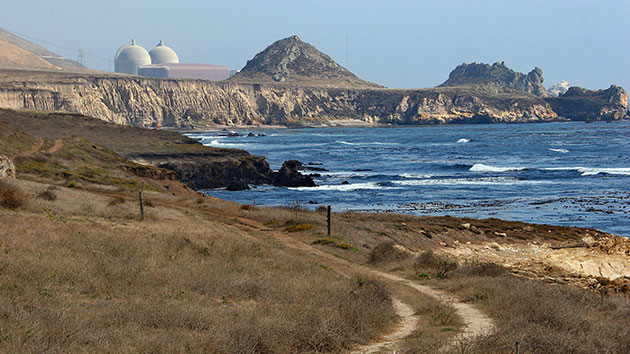 The Diablo Canyon nuclear power plant on the coast outside San Luis Obispo, CaliforniaMichael A. Mariant/AP

The Diablo Canyon nuclear power plant sits by the scenic hills overlooking the California coast, a few hours’ drive north of Los Angeles. It’s the state’s only remaining nuclear plant (after the San Onofre plant was closed in 2013), and it’s responsible for about one-tenth of the state’s electricity, serving more than 3 million homes and businesses.

Since construction on the plant began in the late 1960s, Diablo Canyon has been a focal point of the nationwide controversy over nuclear power. In 1981, roughly 2,000 protesters (including the singer-songwriter Jackson Browne) were arrested at the construction site. Ever since, the plant has faced opposition from environmental groups like the Sierra Club and Friends of the Earth. But now, the plant is attracting an unlikely wave of support from some of the country’s most prominent environmentalists and climate change scientists.

“Let’s decide what we’re going to do right now with the largest single source of clean energy in California.”

Last week, in an effort to ensure that Diablo Canyon isn’t shut down in the near future, this new coalition sent a letter to Gov. Jerry Brown (D); the CEO of Pacific Gas & Electric, the utility that owns the plant; and five state regulatory officials. The letter warned that “closing Diablo Canyon would make it far harder to meet the state’s climate goals.” The 61 signatories include Whole Earth Catalog founder Stewart Brand, climate scientists James Hansen of Columbia University and Kerry Emanuel of MIT, and the Harvard psychologist Steven Pinker.

Their concerns center around an upcoming-ish deadline for PG&E to renew the plant’s operating license. The current license is good through 2024 for one of the plant’s two units and 2025 for the other. If PG&E wants to keep the plant running after that, it will need to seek approval from Brown’s administration and possibly from local officials in San Luis Obispo County. In its letter, the group called for a renewed operating license that could keep the plant running into the 2040s.

But the utility is on the fence. “We have not made a decision to move forward with license renewal,” a spokesperson said, adding that the company is in the middle of a study on seismic activity in the area. (The plant is near a few major fault lines.) In a statement to the San Francisco Chronicle, Tony Earley, the utility’s CEO, was more blunt: “We’ve got a lot on our plates, and we just don’t need to take on another big public issue right now.” And while 2024 may seem like a long way off, the license renewal process can take a long time, and utility executives have been quietly mulling it since at least 2009.

As the global campaign against climate change has gathered steam in recent years, old controversies surrounding nuclear energy have been re-ignited. For all their supposed faults—radioactive waste, links to the Cold War arms race, the specter of a catastrophic meltdown—nuclear plants have the benefit of producing huge amounts of electricity with zero greenhouse gas emissions. That may not have mattered much to Jackson Browne and his fellow activists in the ’80s, but it matters now. A recent analysis by the International Energy Agency found that in order for the world to meet the global warming limit enshrined in the Paris climate agreement in December, nuclear’s share of global energy production will need to grow from around 11 percent in 2013 to 16 percent by 2030. (The share from coal, meanwhile, needs to shrink from 41 percent to 19 percent, and wind needs to grow from 3 percent to 11 percent.)

In Paris, Hansen—probably the world’s most influential climate scientist since he first warned Congress about global warming back in 1988—gave a talk in which he said nuclear “has tremendous potential to be part of the solution to climate change.” It was a point Hansen and some of his allies have made repeatedly over the past year in talks and op-eds. That message has opened a rift in an otherwise cohesive bloc of climate hawks: Those who think a carbon-free energy future is impossible without nuclear are now squaring off against those who think the challenge can be met using only renewables like wind and solar.

“What’s powerful about Diablo is the sheer size of it. If you flip it [off], carbon emissions go up so much.”

Among the former group is Michael Shellenberger, who until recently was president of the Oakland-based environmental think tank Breakthrough Institute and now runs a new group, Environmental Progress. Shellenberger organized the Diablo Canyon campaign after he realized that the larger debate about nuclear could be crystallized around this one existing plant.

“I’m tired of arguing about the future,” he said. “Let’s decide what we’re going to do right now with the largest single source of clean energy in California.”

According to Shellenberger’s research, Diablo Canyon currently produces twice as much power as all the state’s solar panels (California is the nation’s No. 1 solar state). Closing it, he said, would not only shave off one-fifth of the state’s zero-carbon energy, but potentially increase the state’s emissions by an amount equivalent to putting 2 million cars on the road per year. That’s because the power gap left by the plant’s closure would likely be filled by new natural gas plants—which is what happened when San Onofre was shuttered.

“What’s powerful about Diablo is the sheer size of it,” he said. “If you flip it [off], carbon emissions go up so much.”

That’s an important quandary for Gov. Brown, who has tried to position his state as a national leader on climate policy and clean energy. During his first term as governor in the mid-’70s, Brown opposed the plant. But in 2012 he said he had become more open to nuclear power because “it’s good for greenhouse gases.” Brown’s office declined to comment on Shellenberger’s letter. 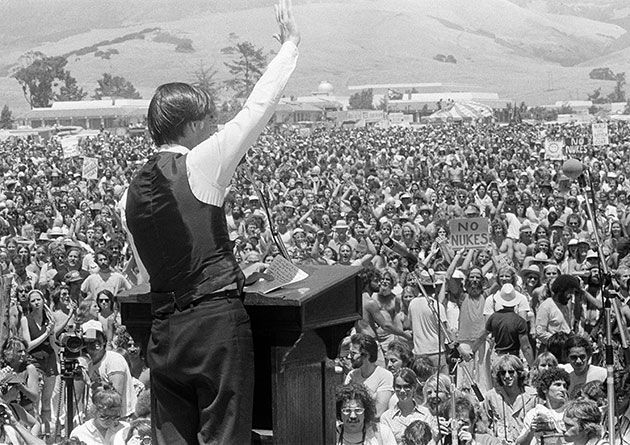 Gov. Jerry Brown addresses an anti-nuclear rally near the Diablo Canyon power plant in 1979. At the time, he was opposed to nuclear power, but his views may have softened. Brich/AP

California played an outsize role at the Paris talks, with a bevy of the state’s political and business leaders, including Brown, touting the state’s ambitious greenhouse gas reduction targets, its cap-and-trade program and clean-energy investment, and other successes. Still, the state’s rate of reducing carbon emissions is slower than the national average—a 7.5 percent reduction since 2000, compared with 9.6 percent nationwide. It will need to pick up the pace in order to meet its ultimate goal of bringing statewide greenhouse gas emissions 80 percent below 1990 levels by 2050.

The problem, Shellenberger said, is that despite the plethora of solar panels on rooftops and electric vehicles on the roads, “people don’t understand how little that stuff is compared to a single nuclear plant.” Moreover, he added, a nuclear plant has the benefit of being consistent regardless of whether the wind is blowing or the sun is shining.

“How are you going to deal with the power coming from fossil fuels?”

Other analysts have reached different conclusions less favorable to nuclear. A 2015 state-commissioned study by the private research firm Energy and Environmental Economics found that the state could meet its 2030 climate goals without nuclear by rapidly growing renewables and by investing in upgrades to energy efficiency and the electric grid.

Mark Jacobson—an engineering professor at Stanford University who has authored several prominent studies on how the United States could run on 100 percent renewable energy—added that he was confident California could meet its clean energy targets without nuclear. “Repairing Diablo Canyon will not only be costly, diverting funds from the development of more clean, renewable energy, but it will also result in down time, resulting in emissions from the background grid, which currently still emits pollution and carbon,” he said in an email. (“Background grid” refers to the normal electric grid, which would have to pick up the slack in Diablo Canyon’s absence.) According to Jacobs, “a more efficient solution would be to use those funds to grow clean, renewable energy further.”

For now, the fate of Diablo Canyon is unclear. But Steven Weissman, an environmental lawyer at the University of California-Berkeley who has watched Diablo Canyon from the beginning, said ultimately the state’s biggest problem isn’t its small share of power from nuclear—it’s the majority share coming from natural gas and coal.

“How are you going to deal with the power coming from fossil fuels?” he said. “If you don’t solve that, you won’t solve your [climate] goals.”