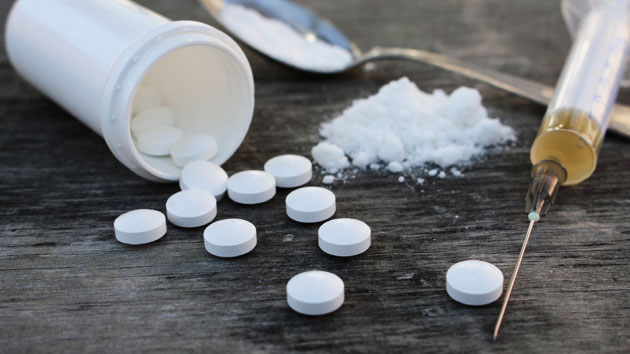 Overdose deaths caused by heroin and synthetic opioids have reached an all-time high. <a href=http://www.shutterstock.com/cat.mhtml?lang=en&language=en&ref_site=photo&search_source=search_form&version=llv1&anyorall=all&safesearch=1&use_local_boost=1&autocomplete_id=&searchterm=drug%20use&show_color_wheel=1&orient=&commercial_ok=&media_type=images&search_cat=&searchtermx=&photographer_name=&people_gender=&people_age=&people_ethnicity=&people_number=&color=&page=1&inline=228565015>MukhinaViktorila</a>/ShutterStock

More Americans are dying from drug overdoses than from traffic accidents. The majority of those deaths are due to a swell in addiction to opioids—a category of drugs that includes heroin and painkillers like OxyContin. Since 1999, overdoses on these drugs have nearly quadrupled, prompting the Centers for Disease Control and Prevention to call the situation “an epidemic.”

“When you look at the staggering statistics in terms of lives lost, productivity impacted, costs to communities, but most importantly, cost to families from this epidemic of opioids abuse, it has to be something that is right up there at the top of our radar screen,” President Barack Obama said earlier this month at a conference to combat prescription drug abuse. “I think the public doesn’t fully appreciate yet the scope of the problem.”

Naloxone, an injectable drug that can save a user’s life by reversing the effects of opiates, has long been standard in emergency room treatments for narcotic overdoses. But it’s been largely unavailable outside hospitals, leaving users who can’t make it to the nearest emergency room with little recourse. That’s now changing. Because of the growing tally of overdose deaths, law enforcement officers, paramedics, and even users themselves are getting more access to the reversal drug.

Here is everything you need to know about naloxone, the overdose antidote.

The “miracle drug” has long been used to combat opioid addiction. Naloxone, commonly referred to by the brand name Narcan, was developed in the 1960s to treat the side effects of prescription painkillers. The drug, which is typically injected, works by traveling to the same place in the brain that opioids do, blocking the path of the narcotics and preventing them from having any effect. When administered at the early signs of an overdose (shallow breath, slow or erratic pulse), naloxone can save a user’s life by bringing breathing back to normal and restoring consciousness.

The overdose-reversing qualities of naloxone have been recognized since its invention, and it’s been called a “miracle drug” for the number of lives it has saved. Recently, a nasal-spray version of naloxone has been brought to market, making it even easier to use.

The Obama administration is putting a lot of money behind fighting overdoses. The president isn’t taking the opioid epidemic lightly; in total, his administration has proposed spending $1.1 billion to fight addiction. In March, his administration announced $11 million to help states pay for and distribute naloxone, as well as to train first responders on how to administer it. He has also established a task force to increase access to substance abuse treatment, and he wants to curb the overprescription of opiate painkillers. The Centers for Disease Control and Prevention will invest $8.5 million in outreach and education about the risks in overprescribing.

States and cities are pushing to make naloxone easier to come by. For decades, naloxone was only available by prescription or through emergency medical technicians at the time of an overdose. But some state and local governments have taken steps to make the reversal drug more accessible. Many law enforcement agencies are training the police to administer the drug; as of July 2015, officers in 28 states carried naloxone to reverse an overdose if they reached the scene before paramedics did.

Some state lawmakers also want naloxone made available in schools. After Pennsylvania saw a sharp rise in the number of young people addicted to opiates, all of the state’s 642 public high schools will be equipped with Narcan, thanks to a bill passed in 2014. Education officials in Massachusetts, where nearly 1,300 people overdosed in 2014, are considering doing the same. In January, Adapt Pharma, which makes Narcan nasal spray, announced it would offer free kits to every high school in the United States. It will be up to local jurisdictions to accept them.

The overdose reversal drug is sometimes available without a prescription. About 40 states have laws on the books that make it easier to get Narcan than a typical prescription drug, according to the National Association of State Alcohol and Drug Abuse Directors. Since 2014, dozens of states have passed laws that allow Narcan to be bought directly from pharmacists without a doctor’s visit. Other states allow third-party prescriptions, meaning friends or family members of users can get a prescription for someone they think is at risk.

Over-the-counter access to Narcan isn’t automatic, despite the laws, because states must set up programs to dispense the drug. Over the last two years, major pharmacy chains CVS and Walgreens have worked with state and local governments to implement the laws and make naloxone available without a prescription in places where it wasn’t already. So far the overdose reversal drug is available at all CVS stores in more than a dozen states, including New York, New Jersey, Tennessee, and Wisconsin. Walgreens recently announced that Pennsylvania will be the sixth state where the drug can be purchased without a prescription. The company aims to offer naloxone over the counter in all stores in 35 states by the year’s end.

Some public health experts say naloxone should be given directly to users. Over-the-counter access to Narcan doesn’t go far enough, according to advocates of harm reduction, a public health strategy that focuses on reducing the negative consequences of risky behavior instead of eradicating the behavior itself. Instead, they say, the overdose drug should be passed out to opiod users for free, through distribution sites, along with clean needles and education on safe drug use.

That’s the approach taken in San Francisco, where the arrival of fentanyl, a synthetic opiate that’s 50 to 100 times more potent than heroin, has led to more overdoses. Fentanyl acts so quickly on the body that naloxone needs to be administered faster than first responders can get to the scene, according to Eliza Wheeler a project manager for the San Francisco Bay Area Harm Reduction Coalition. A recent study by her group, which hands out Narcan, found that distributing naloxone to users is safe and cost effective, and that it reduces overdose deaths. Nearly 650 naloxone distribution programs exist nationwide.

“People were going into overdose immediately. So if they had to (1) find a phone, (2) call, (3) explain where they were located, and then wait for whichever first responder would get there to find them. People would have been dead,” Wheeler said. “Users are the true first responders.”