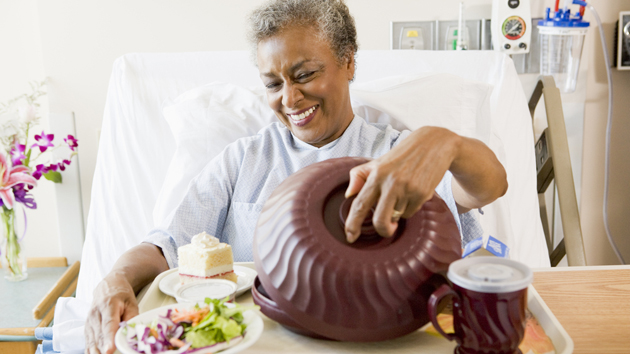 Mindful Meats is a boutique beef company with a creative, if somewhat off-putting, raison d’etre: making good use of spent dairy cows. The older animals, no longer useful for milk, meet just about every standard of sustainability, raised on grassy pastures, certified organic, and unexposed to antibiotics, hormones, or GMOs. Raised and butchered in California’s Marin and Sonoma counties, they’re shipped just a short distance over the Golden Gate Bridge to some of San Francisco’s trendiest upscale eateries and butchers. Oh, and also to the Bay Area’s third-largest hospital.

But that’s weird. Doesn’t hospital food have a rep for being bland and institutional—or, as a less-polite reporter might put it, for “sucking?”

“We’re doing this in the oldest, most beat-up kitchen imaginable,” says Cool. Not to mention a facility run by a food-industry behemoth.

It does. And that’s what Stanford Health Care hopes to change. The Mindful burgers and meatloaf are just part of its plan to lift hospital food out of the culinary doldrums. Eschewing run-of-the-mill ploys to improve hospital food, like Meatless Mondays or proscriptive pledges to limit saturated fat at 10 percent, the program favors what Jesse Cool, the restaurant owner and consultant who spearheads the effort, calls “cleaning the food.”

With breathless pragmatism, Cool rattles off a slew of changes in the works. The hospital is sourcing more-sustainable ingredients across the board, offsetting the cost of going organic and local by serving less (but better) meat. At the same time, it’s revamping recipes to replace added sugar with natural sweeteners and cut down on salt and fat. “We’re doing this in the oldest, most beat-up kitchen imaginable,” Cool adds. Workers at the hospital food facility—built in 1959 and operated by the institutional food behemoth Sodexo—are responsible for churning out 1.8 million meals per year while catering to the fickle demands of an ever-changing patient population, not to mention the countless doctors, hospital workers, and families who visit the cafeteria.

But changing up such a system can be a vexing challenge, thanks not least to institutional inertia. “We were teaching the staff to cook again. You have to learn how to use a knife, follow the recipes. It’s an education,” says Helen Wirth, who directs Stanford’s hospitality services. Cool, who consulted on day-to-day operations in the kitchen, likened her task to “banging your head against a wall.” Six months after the kitchen staff received its first training, “things were just completely out of whack,” Wirth says. Plates chock full of salt and meat were sneaking back on the menu.

Hospital food overhauls have been tried before, with limited success. Obstacles such as the higher cost of organic produce and the perceived risks of relying on smaller farms as suppliers are familiar to any institutional kitchen. But in health care institutions, the core customers—the patients—rarely stick around long enough to advocate change. That’s one reason hospitals have failed to keep up with campus eateries or even high school cafeterias, where students and parents have clamored for better options. Within the $12 billion hospital food market, options that are tasty, healthy, and sustainable are still but a tiny niche, found mainly in progressive regional systems or hospital luxury wings, where the patients pay grandly for such amenities. “Most [hospitals] didn’t even touch this because it’s so complex,” Cool says. “They didn’t have the right leadership, the right chefs. They weren’t using local farms even if it was in the contract.”

Some hospitals are confronting the irony that the meat they serve helps fuel the rise of superbugs that sicken millions.

Over the last five years, however, as the Affordable Care Act has forced facilities to think more about preventive care, more hospitals have begun to reconsider what they’re feeding patients—especially since many of the conditions that drive up health care costs are rooted in unhealthy lifestyle choices. So says Lucia Sayre of Health Care Without Harm, a group that advocates eco-friendly changes in hospitals. Hospital administrators are also becoming more sensitive to consumer trends, including a rising antipathy toward meat raised on antibiotics—”a real driver for change,” Sayre says, as hospitals begin to confront the irony that the meat they serve helps fuel the rise of superbugs that sicken millions of people each year. All of which explains why sustainably raised beef like Mindful’s has become an unlikely prize in some hospital kitchens.

The tough part, Cool says, is that hospitals are seldom able to source their own food. Most have long relied on an industrial supply chain designed to “feed as many people as possible for as little as possible.” Typically hospitals either use group-purchasing organizations (GPOs) that buy everything from beef to bedpans on behalf of multiple institutions or, like Stanford, they outsource hospitality services to operators such as Aramark and Sodexo.

The GPOs and food-service giants, in turn, favor massive distributors, chiefly US Foods or Sysco, which pool demand for kitchen staples and streamline operations to offer hospitals the promise of consistency. That’s their big selling point over smaller vendors. “Both from a quality standpoint, from a liability standpoint, local suppliers don’t have the same responsibility that we have for patients in a hospital,” explains Jeffrey Paulson, president of Sodexo Health Care. A hospital chef running low on asparagus can’t just waltz over to the neighborhood farmers market—unless the farm stand in question has shelled out millions of dollars in liability insurance.

Cool had to master the bureaucracy and win over hospital staffers first. “The patient comes last,” she explains. “The old oxygen-mask approach.”

Consider the complexities of serving patients in a large health care institution: Mrs. Smith in room A21 needs low-sodium food thanks to her hypertension. Mr. Peterson in C4 is deathly allergic to eggs. At Stanford, where a battalion of 40 dietitians determines what patients can and cannot eat, Sodexo’s software matches food stocks with the specific needs of dozens of diets, restricting certain fruits and vegetables, say, for a patient undergoing dialysis, or barring meat and other rich foods following a patient’s bone marrow transplant.

How is a small supplier to crack into that kind of system? Sayre, the healthy foods activist, calls it “gentle pressure.” Health Care Without Harm coordinates among the hospitals within a given GPO, determining total demand for, say, local organic chicken. This gives smaller suppliers the chance to plan ahead and hopefully come in with a competitive bid against giants like Tyson or Pilgrim’s. Sayre says her group has had particular success with fresh fruits and vegetables, bringing more than 90,000 pounds from Bay Area farms to local hospitals.

In a Sodexo-run facility, the hospital faces additional hurdles. Stanford Health Care’s contract with Sodexo stipulates agreed-upon food vendors, Cool says, but the hospital prioritized beef and opened up a bidding process, which Mindful Meats won by partnering with a larger umbrella distributor. The relationship was measured at first: Cool’s team added a Mindful Meats burger to the cafeteria menu at a higher price point than the old, fatty Angus burger. The idea was to let the new product prove itself, allowing customers—chiefly hospital employees—to vote with their wallets before extending the new options to patients. “The patient comes last,” Cool explains. “The old oxygen-mask approach.” 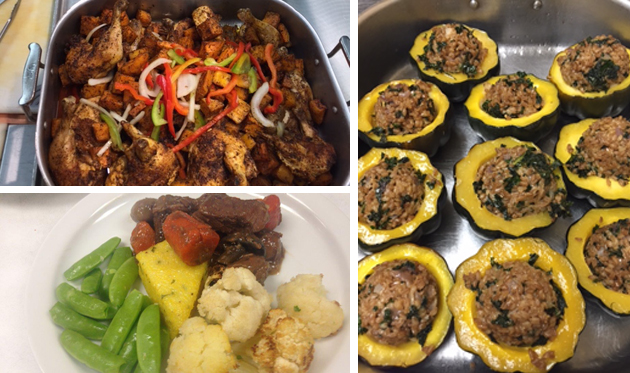 Most hospitals do it the opposite way, she adds, and find themselves stymied by the complexities of patients’ needs. The slow approach gave kitchen staff plenty of time get the hang of the new recipes and portions, and encouraged doctors and dieticians to become more flexible with their ordering, rather than reflexively requesting certain diets, Stanford’s Wirth explains. The gradual rollout also allowed time for Mindful Meats to experiment with creative cuts of meat and get used to the hospital’s high-volume but constantly shifting weekly demands. Today Mindful supplies nearly all of Stanford Health Care’s beef and the kitchen, despite the initial roadblocks, now hums along smoothly, Cool says, thanks in part to the addition of a new head chef.

For many hospitals, getting beyond local fruits and vegetables remains tricky. “It’s difficult to find those products and actually get them into the kitchens,” says Sayre. She adds that some of the most popular suppliers, such as Mary’s Chicken, a California-based provider of sustainable poultry, have struggled to keep up with growing demand. At Stanford, too, it turned out that a local dairy simply couldn’t provide yogurt as reliably as Yoplait. And while the beef supply from Mindful is stable, even breakneck growth—sales are up 150 percent over last year, according to CEO Claire Herminjard—translates into a modest uptick in supply. The company now plans to add to its network of six dairy farms, she says, but that requires carefully vetting each prospective supplier to ensure it meets organic and GMO-free certifications.

“When you’re talking about really changing the food system and how food is processed, supply is going to be a real issue.”

“It’s great to have these relationships between one ranch and one or two hospitals,” Sayre says. “But when you’re talking about really changing the food system and how food is processed, supply is going to be a real issue.”

Such partnerships, she explains, are still largely the domain of hospitals that operate their own food services (“self-op,” in industry parlance). They can interact more directly with their preferred suppliers, trading out menus to match the growing seasons and in some cases even conducting their own food safety audits at local farms. But it’s a hopeful sign that a Sodexo-operated facility like Stanford is signing on to provide healthier food, even if the process is a lengthy slog. And while Sodexo may have had a problem bringing in local food suppliers five years ago, it’s easier now. “If sustainability is part of their DNA and their culture and their needs, then we work with them,” Paulson told me.

Once a niche supplier like Mindful Meats becomes part of Sodexo’s supply chain, Sayre adds, it’s far simpler for other Sodexo-run facilities to take the plunge. But perhaps the biggest obstacle of all is simply finding people passionate enough to get the whole thing off the ground. As it stands, the supply of dedicated hospital-food reformers may be as limited as the supply of grass-fed organic beef.

“Is there a Jesse Cool in every town in America?” Paulson asks rhetorically. “No.”