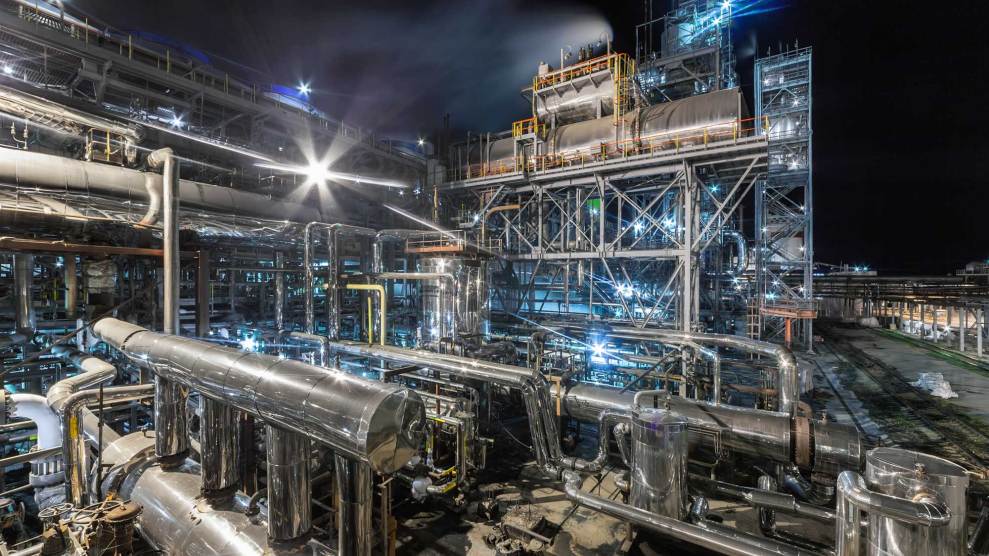 Of all the elements that make up Earth’s atmosphere, nitrogen is by far the most abundant. It is also one of the most inert. Nothing happens when you breathe it in, swallow it, or let it suffuse your skin. Nitrogen gas likes to stay nitrogen gas.

But in the early 20th century, two German chemists, Fritz Haber and Carl Bosch, figured out how to pluck fertilizer from thin air by making ammonia (NH3) out of nitrogen gas (N2). You need energy, lots of it. The Haber-Bosch process relied and still relies on high temperature, high pressure, and hydrogen atoms ripped from fossil fuels. Ammonia from this process fertilizes crops, which in turn nourish you. On average, half the nitrogen in your cells might come from Haber-Bosch. “The Haber-Bosch process is one of the most important for humanity,” says Mercouri Kanatzidis, a chemist at Northwestern University.

But what seemed ingenious 100 years ago is running into problems in 2016. The Haber-Bosch process burns natural gas (3 percent of the world’s production) and releases loads of carbon (3 percent of the world’s carbon emissions). If relying on fossil fuels to give the world electricity and heat is unsustainable, so is relying on fossil fuels to grow its food.

So interest in a Haber-Bosch alternative is heating up. Last month, the Department of Energy issued a funding opportunity announcement for a sustainable way to make ammonia. The challenge isn’t just making ammonia without fossil fuels—scientists can already do that—but to do it at a scale and price that can compete with an industrial process perfected over 100 years. And that ultimately might take more than just a technological breakthrough.

Of course, ammonia existed on Earth long before Haber and Bosch came long. For millions of years, nitrogen-fixing bacteria in soil have been taking nitrogen gas from the air and converting it into ammonia, which in turn is taken up by plants, which are eaten by animals, human and nonhuman. You have nitrogen in your cells from these bacteria, too.

So in the search for new ways to make ammonia, scientists have turned to imitating nature. “Biology does this reaction in fairly simple way compared to Haber-Bosch,” says Paul King, a photobiologist at the National Renewable Energy Laboratory. For one, it happens at room temperature, since any living thing would be cooked and crushed at Haber-Bosch conditions. Nitrogen-fixing bacteria have enzymes that grab N2 molecules and H+ ions, orienting them just the right way so they form ammonia, or NH3.

This reaction does require a jolt of energy. In bacteria, it comes from snapping off a piece of a molecule called ATP. But King has figured out something simpler: sunlight. In a paper recently published in Science, his group made light-sensitive nanorods, similar to what you might find in solar panels, that plug into the enzyme to give it a zap. Basically, all you have to do is mix together this cadmium-based material, some enzymes, and leave it out in the sun. Voila, ammonia—though only a small amount of it.

With solar-powered ammonia synthesis, fertilizer can be made where it’s used.

The problem with making more ammonia? “Enzymes are really cost prohibitive,” says King. Enzymes are incredibly complex molecules that have to be purified from living bacteria. “It makes days and days and lots of water to separate it, and you end up with less than a microgram,” says Kanatzidis. “We cannot even contemplate using that.”

At Northwestern, Kanatzidis is looking for a way to replace the enzyme with a man-made material called chalcogel. In another recently published paper, his team took metals commonly found in the active sites of enzymes and made clusters of them. The cluster is black, so it also absorbs light energy. When researchers scatter the material into water, shine sunlight on it and bubble nitrogen gas through, they get ammonia. And this time, no expensive enzymes.

It comes at a different cost though. The nitrogen-fixing enzyme has evolved over millions of years to grab N2 and H+; in comparison, the chalcogel is just a crude approximation, and it’s thousands of times slower than the natural process. King’s light-powered system—the one that still uses an enzyme—synthesizes ammonia at about 63 percent of the enzyme’s natural rate. And both are not as easily scaled up to Haber-Bosch levels. Yet other groups have experimented with polymer membranes and titanium-based molecules, though those have durability and efficiency problems, too.

So these new ammonia synthesis systems have a long way to go, but they don’t necessarily have to beat Haber-Bosch. It’s no coincidence that King and Kanatzidis have converged on using sunlight to power ammonia synthesis. Making fertilizer via Haber-Bosch is like making electricity at a big central coal-fired power plant—electricity that then needs to be transported hundreds of miles to its point of use.

While electricity storage is tricky, storing ammonia is easy by comparison.

But with solar panels, electricity can be made where it’s used. With solar-powered ammonia synthesis, so can fertilizer. And while electricity storage is tricky, storing ammonia is easy by comparison. You might imagine other systems of ammonia synthesis that rely on yet other forms of renewable energy. “I can’t tell you how many times we’ve talked to people who want to take the output of their wind turbine and make their own fertilizer or fuel for the farm,” says John Holbrook, executive director of the NH3 Fuel Association.

As the name implies, Holbrook’s ambitions for ammonia go beyond fertilizer. Today, cars and power plants run on fossil fuels, whose energy is stored in carbon bonds. But plenty of energy is stored in ammonia, too, and you could imagine a fuel economy based on nitrogen. (After all, the other major use of ammonia from the Haber-Bosch process in early 20th century Germany was making explosives.) The upside, though, is no more carbon emissions. “We in the ammonia fuel community feel like we’ve cracked a code in terms of getting recognition,” says Holbrook.  “We’ve been at it for 13 years without anyone from the Department of Energy attending our conference.” This year’s featured speaker at the NH3 Fuel Association conference will be Grigorii Soloveichik, a program director at the DOE.

Funding interest from the top levels of government is one thing. Making fossil fuel-free ammonia synthesis commercially viable is another. King thinks what will ultimately set the industry off is a carbon tax. Humanity doesn’t need to recognize value in nitrogen; it needs to see danger in carbon.