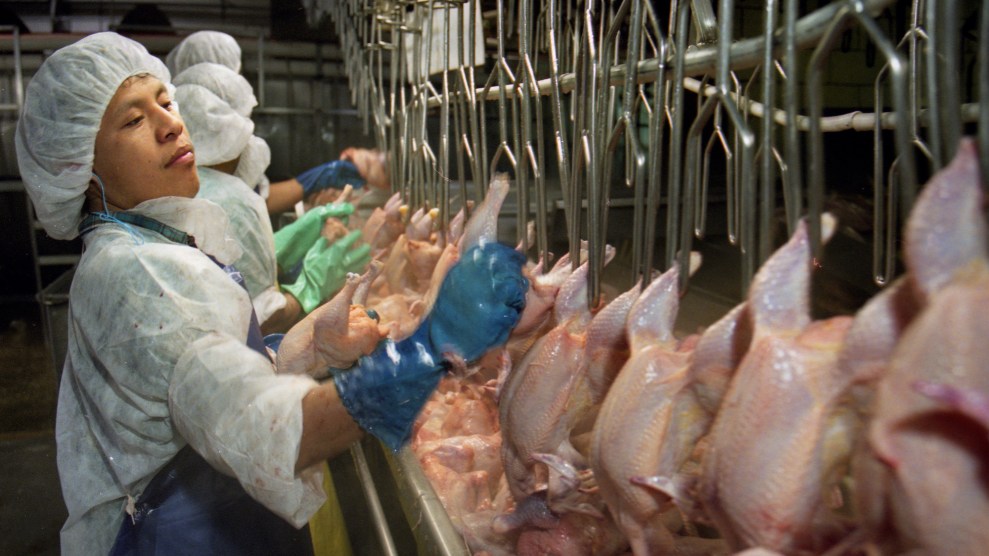 A Latino poultry worker in Montgomery, AL. repeatedly hangs recently slaughtered, de-feathered chickens on the constantly moving poultry line. Once they are de-feathered, the chickens are plunged into nearly freezing water to cool; the temperature in the processing rooms hovers around 40 degrees. <a href="https://www.oxfamamerica.org/explore/stories/why-dont-poultry-workers-just-quit-and-other-frequently-asked-questions/">Earl Dotter</a>/Oxfam America

The United States isn’t exactly a hotbed of trade unionism and worker power. But presumably, most people can take for granted access to the bathroom while on the job. Not so for people who staff the nation’s chicken slaughterhouses, according to a scathing new report from Oxfam America.

After a three-year project interviewing dozens of current and former workers across the country, Oxfam came to this stark conclusion:

Routinely, poultry workers say, they are denied breaks to use the bathroom. Supervisors mock their needs and ignore their requests; they threaten punishment or firing. Workers wait inordinately long times (an hour or more), then race to accomplish the task within a certain timeframe (e.g., ten minutes) or risk discipline.

How do they deal with this brutal state of affairs? “They urinate and defecate while standing on the line; they wear diapers to work; they restrict intake of liquids and fluids to dangerous degrees; they endure pain and discomfort while they worry about their health and job security,” the report adds.

Given that the industry produces what’s by far America’s favorite meat and employs more than 375,000 people, this might sound like a startling state of affairs that will inspire swift federal action. As the Oxfam report notes, “Denial of regular access to the bathroom is a clear violation of US workplace safety law.”

But Big Poultry’s bathroom trouble has been known for a while. For a 2013 report, the Southern Poverty Law Center surveyed Alabama poultry workers on the conditions they face. Findings included heightened levels of repetitive-motion injuries, routine cuts and gashes—and the lack of bathroom breaks. “Of the 266 workers answering questions about bathroom breaks, nearly eight in 10 (79 percent) said they are not allowed to take breaks when needed,” SPLC found. The group noted many of the same conditions flagged by Oxfam, including workers “stripping off their gear while running to the restroom,” on floors that are often “slippery with fat, blood, water, and other liquids.”

Also in 2013, SPLC attorney Tom Fritzsche delivered those findings in testimony before the Inter-American Commission on Human Rights (part of the Organization of American States), noting (video here).

The Oxfam report, too, puts the speed of the modern industrial kill line—the maximum under US law IS 140 birds per minute—at the heart of the problem. “Supervisors deny requests to use the bathroom because they are under pressure to maintain the speed of the processing line, and to keep up production,” the report states. “Once a poultry plant roars to a start at the beginning of the day, it doesn’t stop until all the chickens are processed.”

To keep the line rolling and give workers breaks when they need them is possible, Oxfam found, but that requires resources: maintaining a “set of replacement workers (line assistants or floaters) who step in as needed.” Yet “in the course of hundreds of interviews, only a handful of workers reported that their bathroom needs are respected,” the report found. Interestingly, “These exceptions are primarily in plants that have unions, which offer important protections, inform workers of their rights, and ensure they have a voice on the job.”

For its part, the chicken industry says the claims made by Oxfam are exaggerated. “The health, safety and respect of our employees is very important, and we value their contributions in helping to produce our food,” the National Chicken Council claimed in an online statement. “We’re troubled by these claims but also question this group’s efforts to paint the whole industry with a broad brush based on a handful of anonymous claims. We believe such instances are extremely rare and that U.S. poultry companies work hard to prevent them.”

A number of companies are named in the report, including Perdue, the nation’s fourth-largest poultry company and the subject of my recent feature on the industry’s move away from reliance on antibiotics. “The anecdotes reported are not consistent with Perdue’s policies and practices,” the company states in a response to the Oxfam report. The company went on to describe its policy:

Regarding bathroom breaks, our associates receive two 30-minutes breaks during each eight-hour shift. They typically work 2 to 2½ hours, have a 30-minute break, work another 2 to 2½ hours and have another 30-minute break, then work the remainder of the shift. If an associate is unable to wait for the scheduled break and needs to use the restroom, they are to be given permission to leave the line as soon as someone can cover for them.  If a department is short-staffed that day, there may be times it is difficult to provide immediate coverage.

Thus are the challenges of operating a kill line that requires workers to break down as many as 140 birds per minute. For years, the industry promoted a US Department of Agriculture proposal that would have allowed line speeds to go as high as 175 birds per minute. After a firestorm of criticism from worker-rights and food-safety groups, the USDA shelved that plan in 2014. But, Oxfam America’s Oliver Gottfried tells me, the USDA left the door open to allow it in the future—and Congressional Republicans have been itching ever since to make it so.