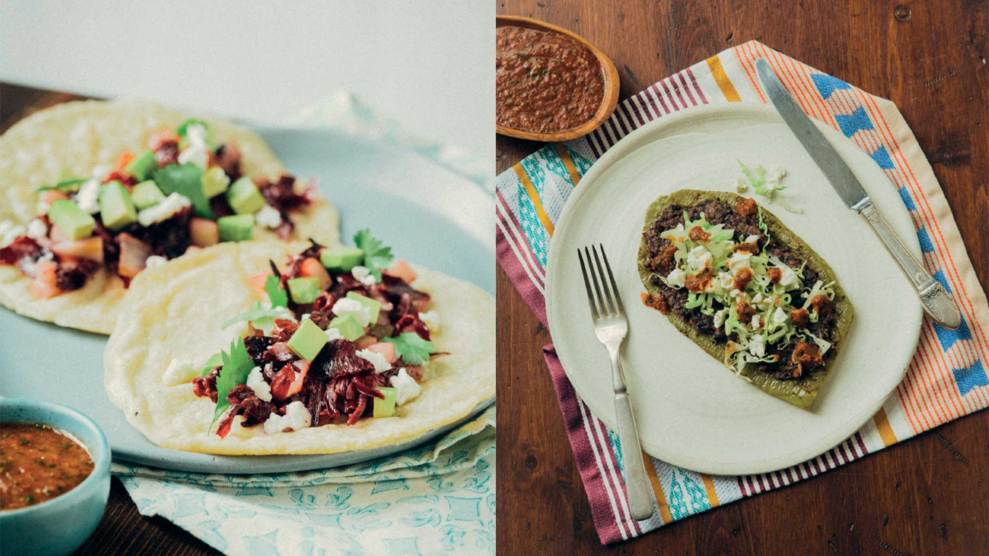 When white people think of Mexican food, visions of nachos coated in orange melted cheese and jalapeños, or burritos bursting with grilled chicken come to mind. Even in US cities where “authentic” Mexican taco trucks line the streets, fried meat and sour cream feature prominently. Sure, these dishes might make you salivate, but they’re just one layer of the country’s complex cuisine—and a pretty unhealthy layer at that.

Hiding behind these modern dishes is a legacy of foods from the indigenous people who inhabited Mexico before the Spanish arrived. For their new cookbook Decolonize Your Diet, authors Luz Calvo and Catrióna Rueda Esquibel dug up that history and displayed it in all its glory. Their task: To “decolonize” their diets and show readers how eating foods native to North America led them to healthier lives.

As the authors informed us on our latest episode of Bite, indigenous Mexicans feasted on corn, beans, wild greens, cactus, squashes, other plant-based dishes, and meat prepared in a wide variety of sauces*. This diet kept them relatively healthy: Historians have found that at the time of the Spanish Conquest, the Aztecs in Mexico lived, on average, 10 years longer than Spaniards.

Amaranth and chia were outlawed by the Spanish because they were used in religious ceremonies and associated with paganism.

But, as Esquibel told us, “the Spaniards really tried to change the way indigenous people grew food and prepared food. They wanted to replace their foods with European foods, particularly wheat.” Indigenous grains were thought to be inferior, and some of them, like amaranth and chia, were even outlawed because they were used in religious ceremonies and associated with paganism.

In other words, the very foods that have come to characterize contemporary Mexican-American fare—cheese, flour tortillas, beef, cane sugar—didn’t exist in America before the Europeans. And unfortunately those foods are linked to the obesity, diabetes, and cancer epidemics plaguing Mexican-American communities today. 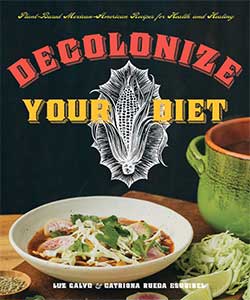 As Calvo and Esquibel found, revisiting pre-Hispanic cuisine meant unearthing ancient ingredients and recipes that can help counter those diet-related maladies. But for the couple, it’s about more than physical health: “We’re trying to push people towards a radical rethinking of the way food is both grown and distributed and consumed,” Calvo said.

They left us with a recipe ripe for mid-summer produce: A rich vegetarian soup showcasing creamy corn and delicate blossoms from a squash plant. “You can really put whatever you happen to have growing in the garden into the soup as well,” Calvo noted.

Adapted from Decolonize Your Diet: Plant-Based Mexican-American Recipes for Health and Healing, by Luz Calvo and Catriona Rueda Esquibel

Preparation
Prepare squash blossoms: If there is a long pistil in center of blossom, remove and discard. Rinse flowers gently under cool water. Gently tear squash blossoms in half.

Roast the poblanos: Rub with oil and place under broiler until they turn black and blister. Place in a bag or under glass container and steam for 30 minutes. Carefully remove charred skin from chile. Tear chiles into strips about ¼-in wide and cut each strip 3-4 inches long.

In a large saucepan on medium heat, sauté onions in oil about 10 minutes, until golden brown. Add garlic and stir until fragrance is released, about 30 seconds. Add corn stock, chiles, zucchini, corn, and epazote/cilantro and bring to a light boil. Simmer 20 minutes. Add squash blossom pieces and cook 5-10 minutes, or until zucchini is crisp-tender. Add salt and pepper. Taste and adjust seasonings. Ladle soup into blows and serve topped with avocado cubes and queso fresco.

Correction: A reader pointed out that potatoes are indigenous to South America, and could not have been part of the native Mexican diet.