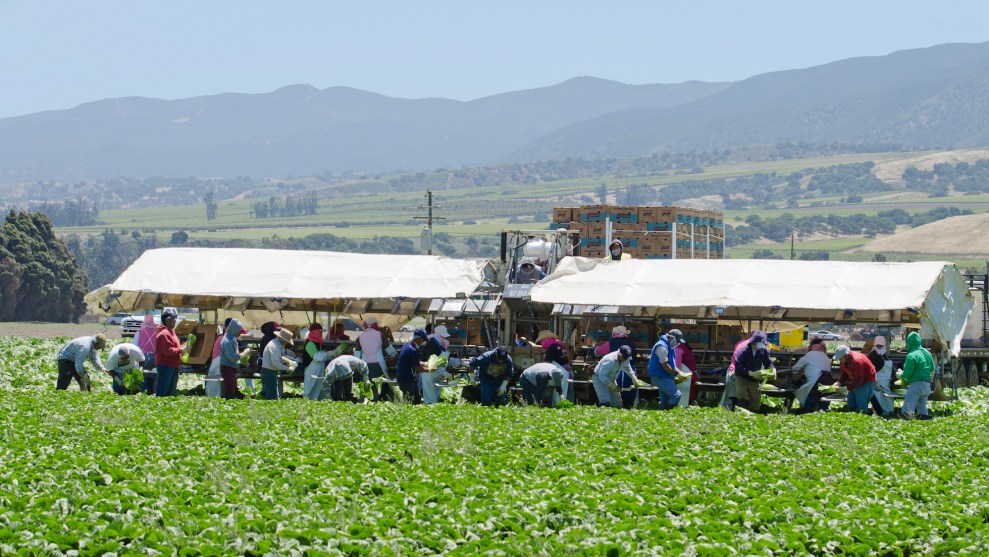 In two of California’s most productive farming regions, at least 212,000 people rely on water that’s routinely unsafe to drink, with levels of a toxin  above its federal limit. And even if the pollution source could be stopped tomorrow, these communities—representing a population more than twice as large as that of Flint, Michigan— would endure the effects of past practices for decades. That’s the takeaway of a major new assessment by researchers at the University of California-Davis.

The toxin in question is nitrate, which leaches into aquifers when farmers apply synthetic nitrogen fertilizers or large amounts of manure to fortify soil. Although probably not as ruinous as lead, the contaminant that fouled Flint’s water, nitrate isn’t something you want to be gulping down on a daily basis. Nitrate-laced water has been linked to a range of health problems, including birth defects, blood problems in babies, and cancers of the ovaries and thyroid.

A third of residents drank the nitrate-laced water available to them, while the rest spent extra money on bottled water, a 2011 study found.

According to the Davis report, nitrate takes a leisurely path from farm soil into the underground water sources that provide both irrigation and drinking water to these regions—taking anywhere from years to millennia. That means the high nitrate concentrations these communities now find in their water are the result of farming decisions made years and even decades ago—and “will persist well into the future,” even if farmers ramp down fertilization rates.

The reality is that the practices are unlikely to change anytime soon. The regions in question are two crucial nodes in California’s industrial-agriculture economy: the Tulare Basin in the southern Central Valley, a massive producer of milk, cattle, oranges, almonds, and pistachios, and the coastal Salinas Valley, which churns out about a half of the leaf lettuce and broccoli grown in the United States, and about a third of the spinach. Together, the two regions produce more than $12 billion in ag commodities and account for 40 percent of the state’s irrigated farmland and half its confined animal operations, according to an earlier Davis report.

While huge economic interests are invested heavily in maintaining the status quo, the drinking-water impact falls largely on low-income farm worker communities. A 2011 study by the Pacific Institute of four small community water systems in Tulare County painted a depressing picture: A third of residents drank the water available to them, “despite years of existing nitrate contamination.” The rest spent extra money on bottled water. As a result, study participants spent 4.6 percent of median household income on water —”more than three times the affordability threshold” recommended by the US Environmental Protection Agency, the study noted.

And because the areas vulnerable to nitrate pollution are spread out and fragmented, it’s difficult to organize to clean up the water. At least the 207,000 residents of Des Moines, Iowa—which faces a similar nitrate problem from proximity to corn and hog farming—has a municipal water works system that spends hundreds of thousands of dollars per year to filter the water—and has even challenged farm interests to clean up their act with a high-profile lawsuit. Municipalities and private well owners throughout the Corn Belt—in Iowa, Minnesota, Ohio, and Missouri—grapple with the issue of heightened nitrate levels in drinking water.

Of course, the Tulare Basin’s nitrate problem—which is completely independent of the current drought—isn’t the only water crisis Big Ag imposes on the region’s residents. The industry’s intense thirst for irrigation sends water tables tumbling, making it ever more expensive to extract groundwater as wells need to be deepened. In times of intense drought like the current one, some low-income communities have trouble accessing any tap water at all. Last year, Mother Jones’ Julia Lurie filed a report from the Tulare County town of East Porterville, “home to the pickers and packers of the fruits, veggies, and nuts grown nearby and distributed across the country,” where thousands of households lacked access to tap water due to dry wells.

And for my feature on California’s nut boom, I visited the Tulare County farmworker town of Alpaugh (pop. 1,000), where a plunging table meant the town’s residents drew tap water laced with dangerous levels of arsenic, a naturally existing toxic chemical that concentrates at the aquifer’s lower depths. They, too, were urged to buy bottled water. It was a stark experience to drive less than five minutes out of Alpaugh and see thousands of acres of brand-new pistachio groves, irrigated by wells drawing down that same aquifer.