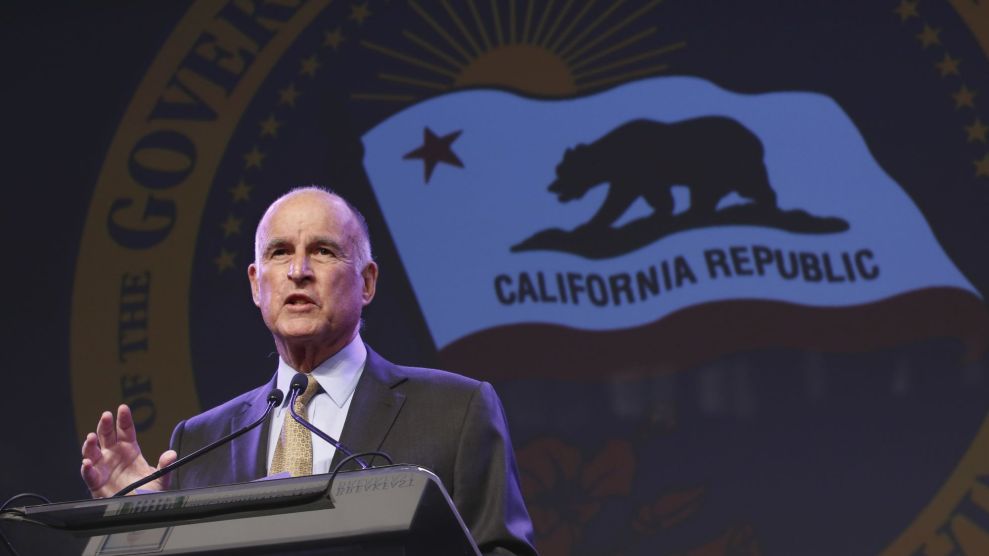 California governor Jerry Brown signed historic legislation Thursday, establishing one of the most ambitious carbon reduction goals in the world. The bill, SB 32, has enormous implications for the state’s economy and for its efforts to combat climate change. It requires that California reduce its carbon pollution to at least 40 percent below 1990 levels by 2030.

“This is big, and I hope it sends a message across the country,” Brown said at the bill-signing in Los Angeles, according to the Sacramento Bee. “The bills today, they really are far reaching, and they keep California on the move to clean up the environment, to encourage vast innovation and to make sure we have the environmental resilience that the Californians really want and expect.” (Brown also signed into law AB 197, a measure that creates additional legislative oversight of the California Air Resources Board, the regulatory agency that had led the efforts to cut emissions.)

California has already made progress in cutting its carbon dioxide emissions, following a landmark 2006 law that called for the state to reduce carbon pollution to 1990 levels by 2020. A report from the California Environmental Protection Agency last June showed that the state was on track to meet those goals, and California has one of the lowest carbon dioxide emission rates per capita. SB 32 would require California to reduce its emissions levels even more drastically. It also ensures that the state’s climate change efforts will continue for at least another 10 years.

Opponents of the legislation argued that making such significant cuts to greenhouse gas emissions would hurt the economy. But supporters counter that that hasn’t been the case: California’s GDP has continued to grow while emissions have decreased, according to data from the California Air Resources Board.* California also didn’t lose manufacturing jobs, as opponents predicted it would, and continued to add jobs. 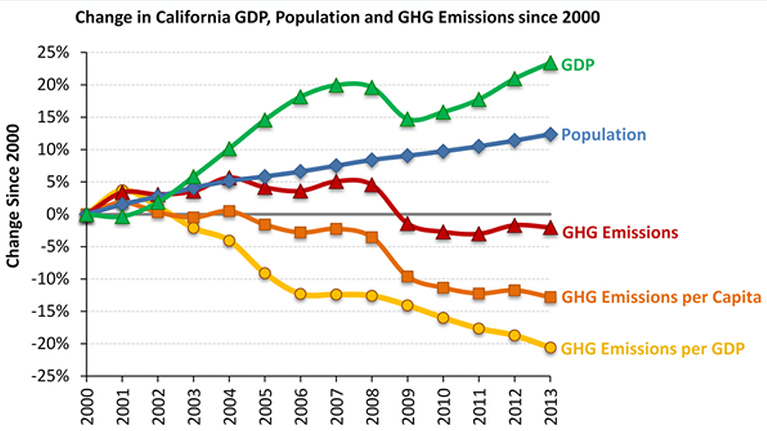 The bill’s goals will not be easy to accomplish, especially since it doesn’t specify what will happen to California’s cap-and-trade program, which sets a price and a limit on carbon emissions. The policy has been billed as a low-cost, revenue-generating way of cutting carbon pollution but has struggled in recent years. Without an effective cap-and-trade system, the state would have to find another way to meet its targets. The challenge facing California is a daunting one; here’s one possible scenario, as laid out by Vox:

We’re talking about a world where California gets more than 50 percent of its electricity from renewables in 2030 (up from 25 percent today), where zero-emissions vehicles are 25 percent of the fleet by 2035 (up from about 1 percent today), where high-speed rail is displacing car travel, where biofuels have replaced a significant chunk of diesel in heavy-duty trucks, where pastures are getting converted to forests, where electricity replaces natural gas in heating, and on and on.

Possible? Sure. Easy? Hardly. The level of effort is just orders of magnitude different from anything California has done so far.

For more on Brown’s efforts to fight climate change, read our feature detailing the history of California’s energy policies.