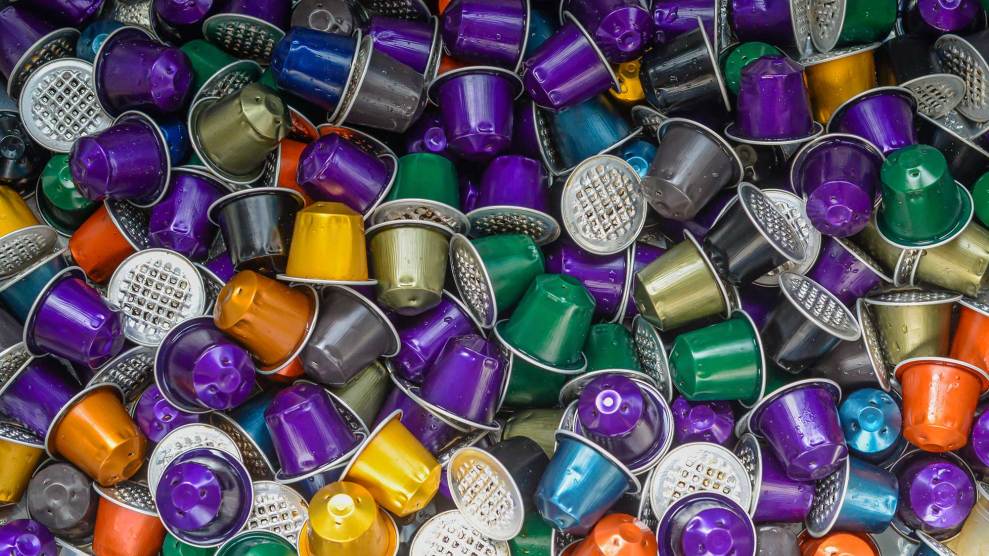 Coffee pods have to be one of the more pitiful innovations of modern society. Rather than dumping ground coffee into a filter and topping it with hot water to get your cup of joe, coffee pod machines, made famous by Keurig, allow you to add a layer of plastic or aluminum waste to the process. The pods themselves are cups the size of a shot glass that contain pre-ground coffee or tea; you insert a pod into the machine, which punches a hole in the top and floods it with water, creating a single serving of a beverage.

As I discovered when writing about them in 2014, most coffee pods are not recyclable. Even when they are made of recyclable materials, they are too small for most recycling facilities.

Now, Mars Inc.’s beverage division, which has its own pod brewing machine, is bragging in a press release about the sustainability of its newly designed pods. (Mars calls them “freshpacks,” and they’re more like pouches than pods.) After realizing that the extraction for the aluminum in the packs accounted for 40 percent of their carbon emissions, the company switched to a different (unnamed) material and beat its “sustainability goal.” The result: a “31 percent reduced carbon footprint.”

Thirty-one percent reduced from what? I don’t know, because Mars doesn’t disclose its pods’ original carbon footprint. And nowhere does the release mention the recyclability of the freshpack. A look at the company’s sustainability report reveals that the company makes its freshpacks recyclable for its house brands of coffee and tea, but in terms of its 2015 goal to use recyclable freshpacks for all its products? “We did not achieve this.” Only 4 percent of freshpacks are recyclable, according to the report.

And “recyclable” is a rather ambitious descriptor for the freshpack. Instead of sticking them in home recycling bins (because “most municipalities lack the equipment and technology needed to separate the packaging layers,” according to Mars itself), Mars encourages people to send in their used freshpacks to a business that collects waste and makes products out of it. Which is cool, but considering how hard it is to get people to just recycle by separating out materials in their own homes or offices, is it really that likely they’ll go to the trouble of mailing a bunch of grimy plastic pouches? Mars says it has seen a 312 percent increase in recycling activity since 2011—but since this is proportional and doesn’t show raw numbers, that could mean anything.

Only 4 percent of Mars Inc.’s “freshpacks” are recyclable.

Not to mention, the single-serving pods don’t appear to be saving customers money: One freshpack of Mars’ house-brand coffee brewed in a pod runs 57 cents (not including the cost of the brewer), whereas a cup of Green Mountain coffee brewed the traditional way costs roughly 44 cents.

To be fair, Mars isn’t a total environmental disaster. Its factories send no waste to landfills, and the company sources its coffee from Rainforest Alliance-certified farms. Mars proclaims in its presser that “our new Freshpack is just the latest step in our ongoing journey to resolve the waste challenge for our customers.” But it’s just hard for me to get over those landfill-bound pods. (And I’m not even going to get into the inferior taste of the brew they produce.) Wouldn’t the best solution to this waste challenge be to just make coffee with regular old (compostable!) paper filters?