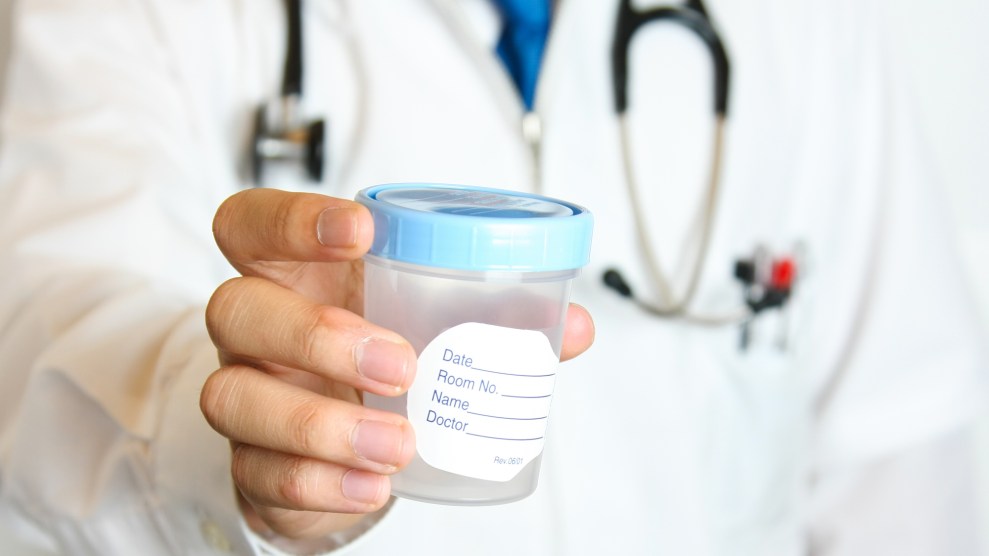 A superbug that can shake off a last-ditch antibiotic called colistin has been alarming the global health community since 2015. It first turned up in hogs on a Chinese farm and has since been found in 30 other countries, including the United States. According to a new paper by Rutgers and Columbia University researchers, colistin-resistant E. coli has been here since August 2014 at the latest—and the particular strain they found is also resistant to another family of last-resort antibiotics, carbapenems.

We’re “essentially building toward a situation where you’re going to have difficult if not impossible to treat urinary infections.”

To learn more about the prevalence of antibiotic-resistant bacteria, the research team took a fresh look at old samples of E. coli taken from patients at a New Jersey hospital. The worrisome strain appeared in a urine sample taken in 2014 from a 76-year-old man with a urinary tract infection. At the time, the case was fairly routine—the man’s UTI was cured by common antibiotics. But when the researchers re-analyzed the sample this year, they found the E. coli in it could withstand both colistin and carbapenems—the first bacteria identified in the United States with resistance to both drugs.

Worse still, gene sequencing showed that the genes that gave the E. coli strain the ability to resist the two crucial drugs aren’t just any old genes. They exist on what’s known as a plasmid, a DNA fragment that readily jumps from one bacterium to another. The E. coli strain’s plasmids were “highly similar” to the ones found in that Chinese hog last year. These so-called “plasmid-mediated” genes that deliver colistin and carbapenems resistance can theoretically bounce over to other strains—including ones that have already developed resistance to other antibiotics. Indeed, the New Jersey strain proved to be resistant to “several” other classes of antibiotics in addition to colistin and carbapenems, the researchers found.

It’s also chilling that this superstrain of E. coli turned up in a UTI case. E. coli is the most common trigger of UTIs, which in turn are “among the most common infections in people,” according to the Centers for Disease Control and Prevention.

“These strains are probably already in the community and could spread further, essentially building toward a situation where you’re going to have difficult if not impossible to treat urinary infections,” Rutgers’ José Mediavilla, a lead author on the study, said in a press release. Thus a condition that used to be an easily cured annoyance could morph into a serious public health threat—lingering UTIs can trigger kidney damage and even sepsis.

The slow unraveling of antibiotics as a tool to fight infections is intimately related to modern meat production, which for decades has relied on antibiotics to make animals put on weight faster and fight off disease in tight, unsanitary conditions. While overuse in human medicine surely plays a role, nearly 80 percent of the antibiotics used in the United States flow into livestock farms, the latest FDA figures show. The Centers for Disease Control and Prevention, the World Health Organization, the UK government, and other public health authorities warn that overuse of drugs in meat farming are a key generator of antibiotic-resistant pathogens, which cause 90,000 US deaths annually, while also racking up $55 billion in costs and causing 8 million additional days that people spend in the hospital, according to the National Institute of Allergy and Infectious Diseases.

And as Maryn McKenna showed in a 2012 Atlantic piece, a growing body of research links human UTIs with resistant E. coli strains in US, Canadian, and European chicken. She writes:

The researchers contend that poultry—especially chicken, the low-cost, low-fat protein that Americans eat more than any other meat—is the bridge that allows resistant bacteria to move to humans, taking up residence in the body and sparking infections when conditions are right. Touching raw meat that contains the resistant bacteria, or coming into environmental contact with it—say, by eating lettuce that was cross-contaminated—are easy ways to become infected.

Since that time, the US poultry industry has begun to move away from reliance on antibiotics, a story I told here. But as I showed in my piece—and as that rogue colistin-resisting gene underlines—these reforms may be too little, too late. Resistant pathogens cross borders in all kinds of ways—in traveling people, in food exports, and in wild birds, for example. And as the US meat industry finally begins to wean itself from routine antibiotics, China is moving in the opposite direction, as the below chart from my article shows. Indeed, colistin itself has never been routinely used on US farms, but it’s quite common on China’s vast and growing hog and fish facilities. 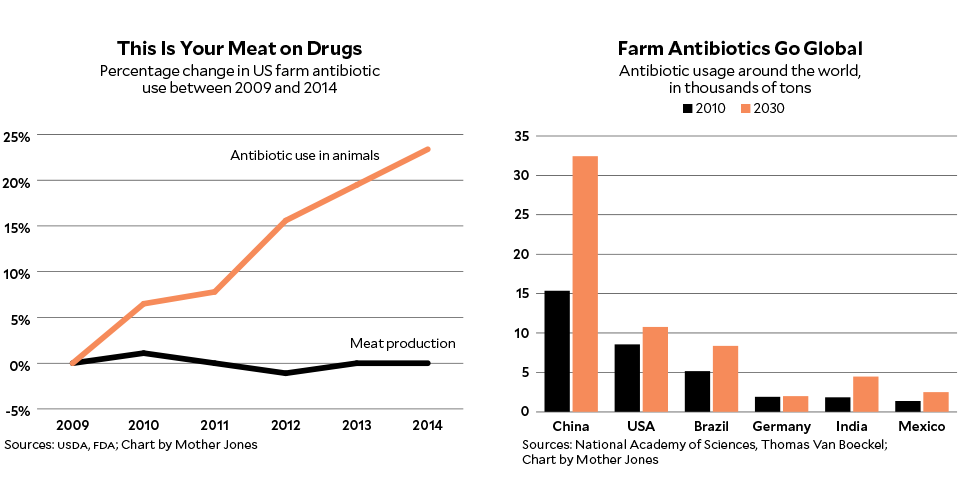