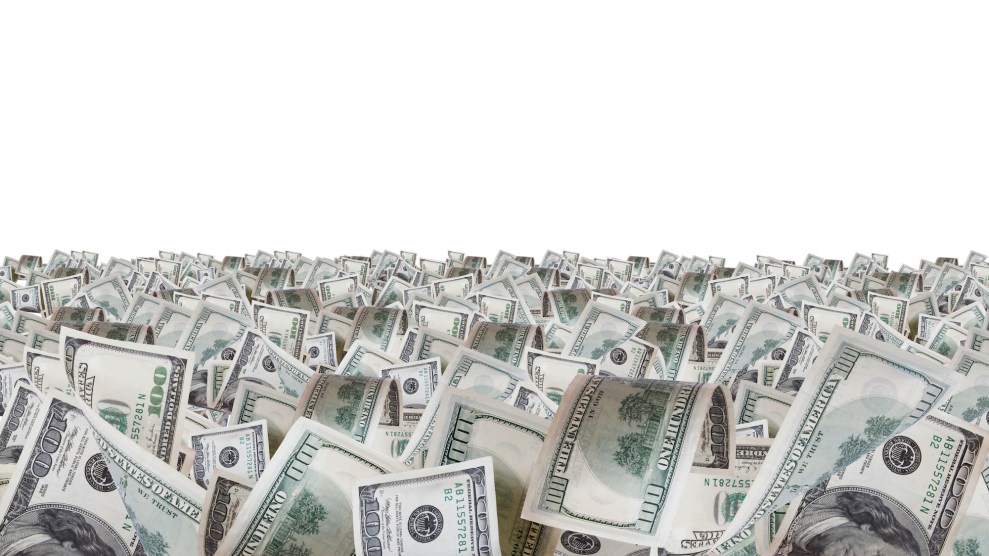 If you were an exec at a big corporation that mass-produces food or farm chemicals, who would you rather see prevail in November’s presidential election?

To get an idea of where Big Food and Ag stand on the 2016 race, I dug into the Center for Responsive Politics’ OpenSecrets.org campaign-finance database—which gathers data on contributions from corporations, businesses, trade groups, and their employees—with the help of CRP researcher Doug Weber. I found that as of August 31, Democratic nominee Hillary Clinton enjoys about a 2-to-1 lead over Republican rival Donald Trump.

However, just like her lead in the polls, her status as the race’s chief agribusiness cash magnet got a little weaker in August. By the end of July, Clinton had drawn $1.2 million in agribusiness donations compared to $394,415 for Trump, data supplied to me by Weber shows a 3-to-1 advantage for the former secretary of state. But in August, the reality TV impresario began to close the gap (though he still raised less cash).

I also got Weber to break out the two contenders’ top agribusiness donors. For each, I roughly bunched companies by type.

Some of Clinton’s biggest benefactors hail from firms associated with organic foods. In addition to grocery giant Whole Foods and kefir maker Lifeway, Turkish organic-fruit exporter Nimeks mustered the biggest agribiz donation of all in the 2016 presidential race—perhaps eyeing the fast-growing US organic-food import market. Big-name food processors General Mills, Nestlé, and Kraft chipped in, as did grain traders Cargill and Continental Grain along with Roll Global, the California nut-pomegranate giant owned by the potent Resnick family, profiled by Josh Harkinson here.

The industry could be betting that  “Trump might actually mean what he says about trade whereas HRC may not.”

She also got love from the rapidly consolidating seed-agrichemical industry—see trade group Croplife America and pesticide behemoth Syngenta (now owned by the state-owned Chinese conglomerate ChemChina). (These contributions come on top of the $335,000 fee Clinton earned for speaking before the Biotechnology Industry Organization, a trade group, in 2014.) Rebeckah Adcock, senior director of government relations for CropLife America, told me that the Croplife donations tallied by the Center for Responsive Politics “would have been for contributions made privately by individuals employed by CLA,” not by the organization itself.

Interestingly, even though no seed-pesticide entity figures among Trump’s top donors, Adcock serves on the GOP candidate’s ag-advisory team. Adcock says her presence on the board shouldn’t be read as an endorsement for Trump, either by her or by Croplife America. “The campaign reached out to many ag groups asking for qualified advisers across the breadth of ag policy disciplines,” she said. “CLA’s policy office has also provided input to the Clinton team—the difference being, the Clinton campaign has not created a public advisory group list.”

As for Trump, his most notable agribiz supporters hail from the meat industry. The Clintons have been associated with Arkansas-based giant Tyson since the 1970s, but this year Tyson and associated employees have given to Trump. (A Tyson spokesperson says the company “does not contribute to presidential campaigns,” and that the contributions came from individual employees.) Poultry processor Mountaire Farms and dairy behemoth Dean Foods also show up on Trump’s ledger. Perhaps the industry is salivating over vows by Trump ag surrogates that the candidate would roll back clean-water regulations on factory livestock farms.

The potent Florida sugar company Fanjul Corp saw fit to give to both candidates (though Clinton’s haul was considerably sweeter), and both candidates scored from the tobacco industry—Clinton from Altria, parent company to Philip Morris, and Trump from Vector Group, which makes discount cigarettes.

So why the 2-to-1 preference for the Democrat in the presidential race? Ferd Hoefner, policy director of the National Sustainable Agriculture Coalition and a longtime watcher of DC food politics, told me the net preference probably reflects a desire to get on the good side of the winning candidate. Poll-tracking sites like FiveThirtyEight have given Clinton higher odds of winning since the party conventions, though the margin has been tightening since mid-August—which may be why Trump seemed to pick up agribiz fundraising steam over the course of that month.

Another reason might be trade—specifically, a controversial global trade deal called the Trans-Pacific partnership, which ag interests see as a prime opportunity to expand markets for seeds, chemicals, and meat abroad. Both candidates now oppose it, but—as Trump pointed out in Monday’s debate—Clinton championed the TPP while it was under negotiation during her stint as secretary of state. The industry could be betting that “Trump might actually mean what he says about trade, whereas HRC may not,” Hoefner said. Hoefner added one more possible reason for Clinton’s higher popularity among agribiz execs: “just fear of a possible economic meltdown with a political novice in the White House.”