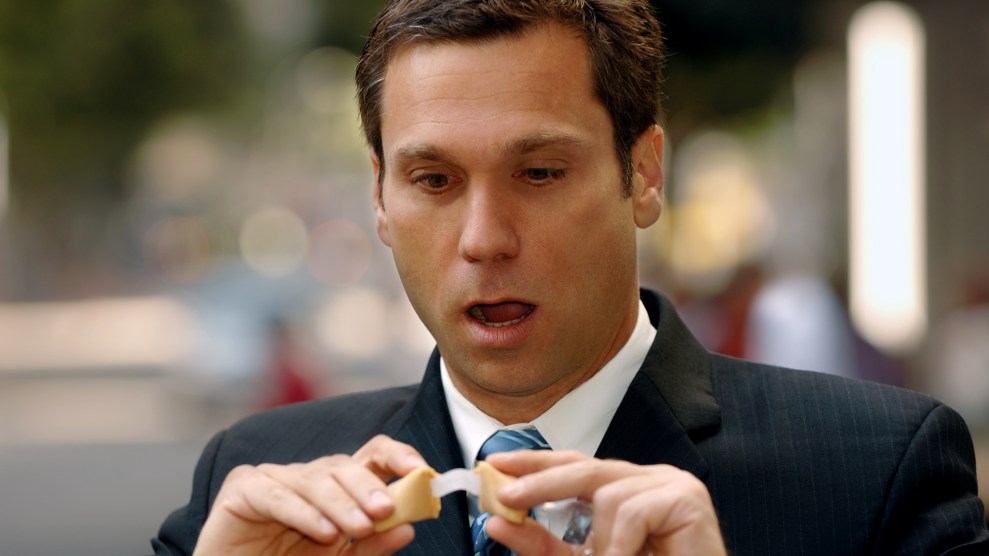 The Golden Gate Fortune Cookie Factory in San Francisco isn’t much bigger than a narrow garage, but it produces thousands of fortune cookies each day. Large machines drip batter onto hot circular plates, hardening them in an instant. Two Chinese American women quickly grab the warm wafers, fold them over an iron, and insert a small piece of paper inside before fully closing the cookie. They move quickly under the gaze of tourists, who pay 50 cents to snap a photo. 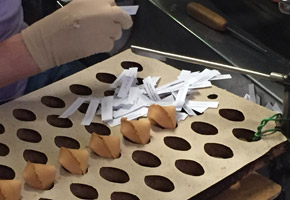 There’s a decent chance the last fortune cookie you ate came from this factory: San Francisco and Los Angeles churn out most of the country’s supply. Aside from being big producers of the treat since the mid-20th century, these two cities also have a running feud about which city can claim to be the cookie’s original hometown. Jennifer Lee writes about this history in her book, The Fortune Cookie Chronicles; you can hear her on a recent episode of our podcast Bite.

Thirty years ago, this battle came to a head when representatives for each city met in San Francisco’s Court of Historical Review to settle the dispute once and for all. (To be clear, this court was a mock court, the same that deliberated on whether martinis originated in San Francisco or the nearby city of Martinez, and whether Bay Area bagels are as good as New York’s.) After arguments for both sides were heard, the judge was presented with a fortune cookie. It read: “Judge who rules in favor of L.A. not a very smart cookie.”

After the laughter died down, a small Japanese woman named Sally Osaki approached the stand. She was carrying two long irons with clamps on the end—the original tools for making fortune cookies, she said.

And then Osaki said something that shocked everyone: “They’re not Chinese, they’re Japanese.” Later, Osaki recalled that the statement “just came out. I knew it in my soul.”

The irons she carried belonged to the owner of the Japanese Tea Garden in San Francisco’s Golden Gate Park. Osaki, who grew up in Japan, recognized that the fortune cookie concept originated with Japanese bakers, who would stick messages into tea cakes. Fortune cookies, she said, only became a Chinese tradition later—during her family’s, and her people’s, darkest times.

At the start of World War II, 120,000 Japanese and Japanese Americans were forced into internment camps on the West Coast. They had to leave everything behind: their homes, their businesses, their belongings—and, for those who were bakers, their iron tools for making tea cakes. It’s rumored that Japanese families passed these on to Chinese immigrants in their neighborhoods. And, well, the rest is history.

To hear more about Osaki’s story and the origin of fortune cookie, download our episode here. Also on that episode, don’t miss Tom Philpott’s interview with author Valerie Imbruce on how Chinatown markets have been sources of fresh produce since before the days of big supermarkets, and why they’ll continue to flourish.