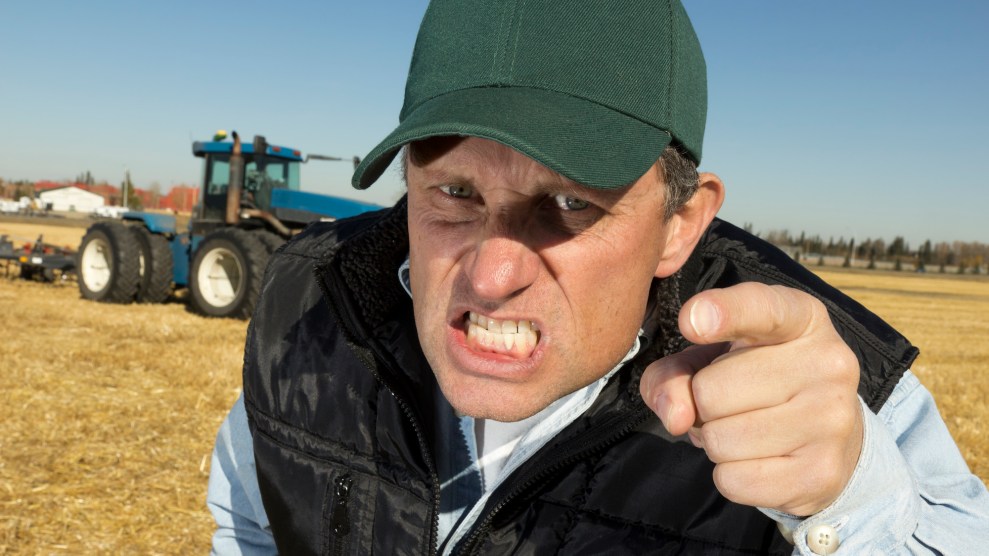 As the election lurches into its final days, Donald Trump’s electoral prospects are as voluble as the man himself, one minute receding into the same fog that once claimed Trump steaks and other failed enterprises; the next, buoyed by a surprise lurking in a disgraced former congressman’s, uh, “device,” and a Republican FBI chief’s strange decision.

Meanwhile, Donald-mania burns bright among at least one subset of the population far from the rollicking events in Washington, DC: farmers and ranchers.

According to a new poll by trade journal Agri-Pulse, conducted October 5 to October 18, Trump leads Democratic rival Hillary Clinton by the commanding margin of 55 percent to 18 percent among farmers with operations of at least 200 acres. Of the rest, 15 percent were undecided, 8 percent declined to answer, and a combined 3 percent supported third-party candidates Gary Johnson and Jill Stein.

While farmers make up a tiny part of the national electorate—there are about 662,000 farms that are more than 180 acres in size, according to the latest US census numbers—they actually could make a difference in the election in a key swing state: Ohio, where Trump enjoys the support of 68 percent of farmers, the poll found.

Why would a lifelong urbanite who splits his time between Manhattan and Palm Beach (shuttled to and fro on his private jet) enjoy such robust support in the heartland? The answer may lie in The Donald’s unmatched ability to deliver an angry, frothing rant. The Agri-Pulse poll finds that 86 percent of respondents reported being somewhat or very dissatisfied with the way things are going in the United States. (That’s even higher than the 70 percent rate found in Gallup’s latest poll of the overall US population.) On a question about the “overall state of agriculture today,” “dissatisfied” trumped “satisfied” by 60.4 percent to 37 percent, the poll found.

As Siena Chrisman recently put it on Civil Eats, “Rural America is mad.” She notes that Trump polls strongest in places where “white identity mixes with long-simmering economic dysfunctions,” quoting a New York Times analysis. And few places combine embattled white identity and economic stress quite like farm country. According to the US census, just around 150,000 of the nation’s 2.1 million farmers are Hispanic, black, Native American, or Asian.

As for the farm economy, this US Department of Agriculture chart tells a story of long-term stagnation, briefly interrupted by the government-engineered ethanol boom from 2006 to 2013. Look at the bottom line—”net farm income,” which measures what farmers take home after expenses. 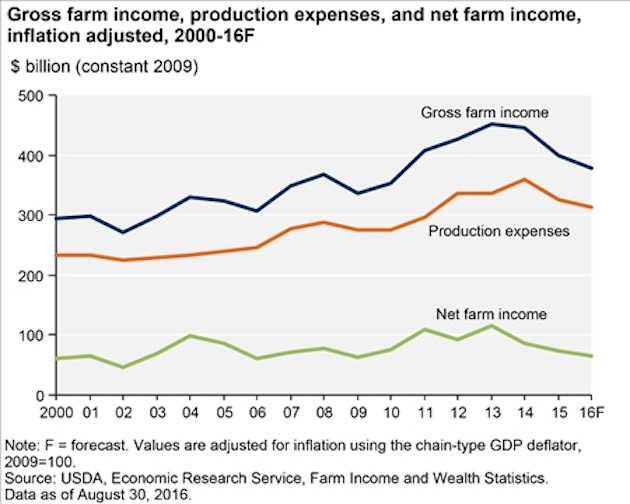 In short, as I lay out here and here, the kind of large-scale commodity farmers polled by Agri-Pulse are squeezed between a small handful of buyers (Archers Daniels Midland, Cargill, Bunge) that are always looking to drive crop prices down, and an ever-smaller handful of input suppliers (Monsanto, Bayer, Dow, DuPont, Syngenta, all of which are currently involved in merger deals) always looking to jack up the price of seeds, fertilizers, and pesticides. It’s no wonder, as Iowa State University ag economist Chad Hart has shown, that the “long run profitability” of such farming is “zero.” Here’s an illustration of what Hart means—it involves corn, by far the biggest US crop. It shows how production costs inevitably rise to meet or surpass the prices farmers command in the market, keeping profits to a minimum. 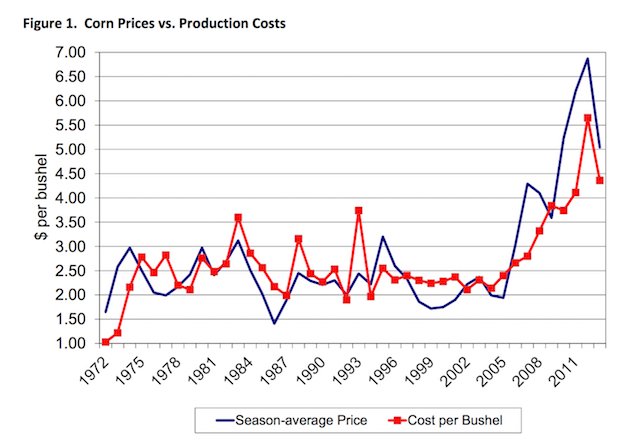 In 2014 and 2015, USDA figures show, farmers actually lost money on every acre of corn they harvested, a situation that will likely hold this year as prices remain in the dirt. It’s true that government initiatives like subsidized crop insurance help buffer farmers from losses, but as Chrisman shows, such programs have shifted dramatically since their New Deal origins. They once existed to ensure a fair price for farmers; they’re now geared to help  farmers scrape by while pumping out as much crop as possible.

As long as these conditions hold, it’s no surprise that the commodity farmers polled by Agri-Pulse are restive and looking for answers from a figure whose chief political skill is fulmination.