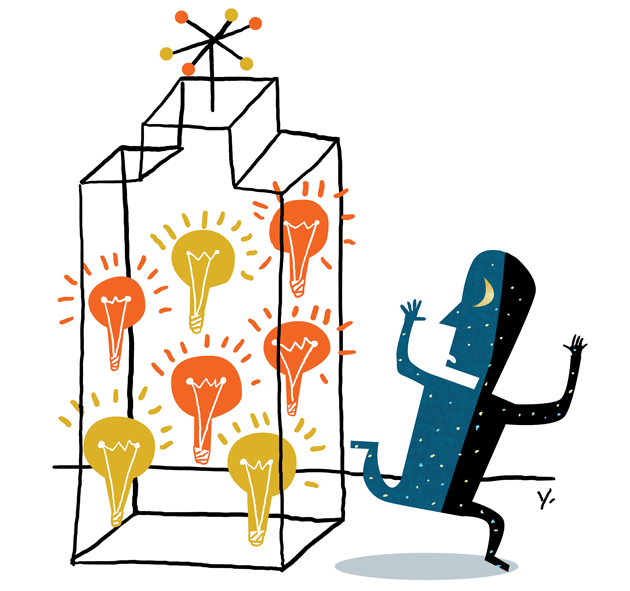 Have you ever looked up at a glowing city skyline and wondered, even though it’s pretty and all, why so many offices stay lit up all night long?

It’s hardly an idle question. According to the American Council for an Energy-Efficient Economy, commercial buildings account for nearly a fifth of America’s energy use. A sizable portion of that energy—up to 43 percent for office buildings—goes toward lighting. That generates a collective bill of upward of $27.3 billion a year. In 2015, commercial structures were responsible for sucking up 258 billion kilowatt-­hours for lighting alone, creating the same planet-warming emissions as nearly 40 million cars.

The environmental concerns go beyond wasted energy: The glow is also not good for nocturnal critters. Over the past 50 years, cities have increased in brightness by an estimated 5 percent every year, drawing in rising numbers of night-migrating birds, disorienting them, and causing them to collide with buildings or circle to the point of exhaustion. A 2014 study estimated that as many as 1 billion birds die each year after hitting buildings. Artificial light can also prevent sea turtle hatchlings from finding their way to the surf line, and make it harder for prey animals to escape their predators, throwing off entire ecosystems. It can cause trees to bud early, leaving them more susceptible to frost damage. Yet “human beings imagine light as a really positive thing,” says Christopher Kyba, a physicist who studies light pollution at the German Research Centre for Geo­sciences. “It’s hard to imagine that it has any negative impacts.”

Federal and state governments offer tax breaks to some building owners who reduce their energy use, so flipping the switch off at night seems like a no-brainer. But it’s not that easy, says Luigi Polese, an engineer who works on energy at the National Renewable Energy Laboratory. Few office workers take it upon themselves to turn off the lights when they leave—and even in buildings that have light and motion sensors, the technology is notoriously wonky: They can turn off the lights if someone is standing still or working at a computer, so office managers often override the sensors. What’s more, some businesses intentionally leave lights on for security purposes (though the jury is out on whether this actually reduces crime). Cleaning crews remain in buildings well into the night, and more and more people are working nontraditional hours. Coordinating all those people is complicated, says Polese. “People don’t pay much attention to the fact that leaving lights on is wasting energy.”

A new smart sensor— which senses workers’ locations and their activity levels—could cut building owners’ light bills in half.

Despite the challenges, there are some bright spots. In 1999, the National Audubon Society launched Lights Out, a program that highlights the dangers city lights pose to birds. Over the last 17 years, Audubon has dispatched volunteers in more than 20 cities to encourage building managers to dim or turn off nonessential nighttime lighting during peak migratory months. At the start of each migratory season, the group spreads the word to building owners that it’s time to dim the lights. Each morning, volunteers from a group called Chicago Bird Collision Monitors hit the sidewalks to collect birds killed or injured in the night. In Chicago, where Lights Out began, about 100 buildings have signed on, saving an estimated 10,000 birds annually in one neighborhood alone.

The International Dark-Sky Association has educated communities about the environmental and financial benefits of dimming skylines since 1988. Thanks in part to its efforts, at least 14 municipalities say they’ll reduce the use of night lights. And in France, home of the City of Light, a 2013 law is projected to save an estimated $220 million in electricity annually. New York City lawmakers are considering similar legislation to help the city achieve its goal of cutting emissions by 80 percent by 2050. Meanwhile, New York Gov. Andrew Cuomo now requires 20 state government buildings to turn off outdoor lights at night during annual bird migration.

Following rules like that is about to get easier. In 2009, the National Renewable Energy Laboratory turned its attention to the problem of unnecessary night lighting. The result: a smart sensor the size of a stick of gum that goes beyond detecting motion—it can also tally how many people are in a room, their exact location, and their activity level. The NREL says the sensor, which is now in the licensing phase, could reduce lighting costs by more than half—a yearly savings of over $13 billion nationwide. That’s the kind of bright idea that just might dazzle reluctant building owners. “When you say you’re going to make things darker, that sounds really bad,” says Kyba, the physicist. But lights that know how to turn on when you need them and off when you don’t—now that’s appealing. “It’s entirely possible to have a comfortable, well-lit city that isn’t so bright.”