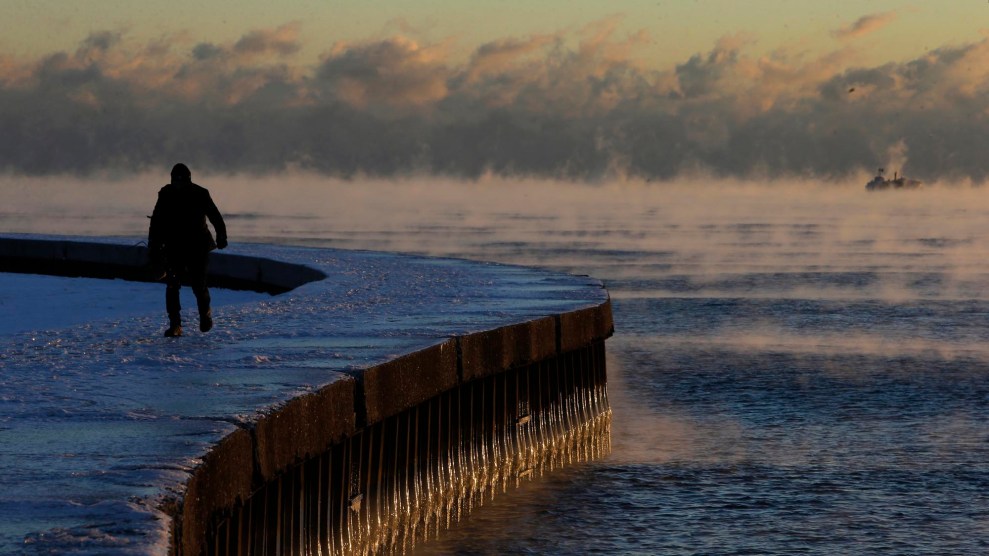 The polar vortex is back and the bitterly cold temperatures and snow it’s bringing with it will affect large swaths of the United States. Temperatures dropped to well below zero with wind chill factors making it feel like minus 20 in parts of the Midwest. The cold air is now moving east, bringing subzero temperatures to New England, while the mid-Atlantic will struggle to climb into the double digits. Even the South won’t be spared—parts of Florida will experience temperatures in the high 40s.

Cold spells like this one tend to produce quite a bit of heat from climate change deniers, who are apparently convinced that the existence of a few cold winter days somehow disproves global warming. That includes Jim Inhofe, the outgoing chairman of the Senate’s environmental committee, who infamously used a snowball as a prop during a floor speech attacking climate science. It also includes President-elect Donald Trump:

Unfortunately for Trump and other deniers, the science is settled: Global warming is very real, and humans are causing it. There is, however, a legitimate scientific debate over whether global warming is actually making extreme cold snaps more likely. According to some scientists, we can, in part, thank Arctic warming for frigid temperatures. As Chris Mooney reported for Mother Jones back in 2014, the theory—advanced by Rutgers professor Jennifer Francis and other scientists—is that the rapidly warming Arctic is affecting the jet stream in ways that can contribute to bone-chilling weather in other parts of the Northern Hemisphere:

That shrinking temperature difference is what wreaks havoc on the jet stream.”When the jet stream gets weaker, it meanders more,” explained Francis in an interview this week. “It wanders north and south and when it gets into one of these wandering and wavy patterns, that’s when we see these pools of cold air pulled southward.” Those pools of cold air are what vast parts of the country are experiencing right now.

Although a recent study backs up Francis’ hypothesis, there are still some climate scientists who aren’t ready to conclude that global warming is producing bitterly cold weather. “The problem with most if not all of the Arctic/jet stream studies has been the lack of a clear physical cause-and-effect relationship, with correlations found but mechanisms as yet uncovered,” Kevin Trenberth, a climate scientist at the National Center for Atmospheric Research, told the Washington Post in November.

If you want to take a deeper dive into the science, check out this 2014 debate between Francis and Trenberth on our Inquiring Minds podcast:

Francis understands why some scientists are skeptical about linking the warming Arctic to cold weather in the Midwest. “We’re just now starting to unravel the way the Arctic contributes,” she says of global warming. To be sure, the climate system is very complex, and very cold temperatures are common in winter. It’s important to note, as Francis does, that Arctic warming isn’t the sole cause of these cold spells.

Climate science is constantly evolving as researchers learn more about global warming and how it affects weather patterns, so it could be a while before there is a scientific consensus on the link between global warming and the polar vortex. But there’s one thing that even Donald Trump can agree on: It’s really, really cold.