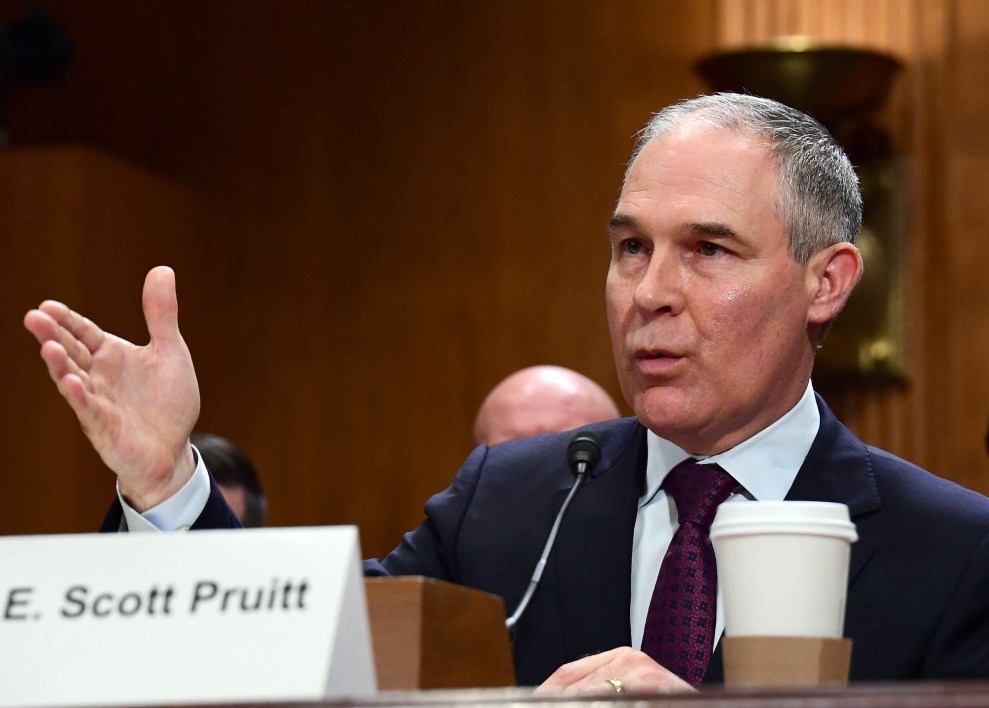 Outside Scott Pruitt’s confirmation hearing to lead the Environmental Protection Agency, the hall was packed with demonstrators. Some were Standing Rock activists protesting the Dakota Access Pipeline. Others were wearing face masks to make a point about Pruitt’s polluter allies. Many environmentalists argue that Pruitt is simply too deep in the pocket of the oil and gas industry to make his EPA anything but a farce when it comes to science.

Inside the hearing, Pruitt at times seemed to bolster that case. Throughout the morning, he hedged on the basic science on a range of issues under the EPA’s purview, faltering even when it came to the most well-established impacts of pollution.

On climate change, Pruitt claimed there’s more scientific controversy than there really is. He acknowledged that global warming is not a “hoax” and that humans have at least some impact on the climate. But, he added, “the ability to measure and pursue the degree and the extent of that impact and what to do about it are subject to continuing debate and dialogue.” That’s a common line used by Republicans to dodge the tougher question of what policies are needed to rein in greenhouse gas emissions. In reality, there is virtually no debate in the scientific community over manmade climate change, and many of its consequences—from drought, to rising seas, to increased wildfires—are well-established.

Pruitt repeatedly insisted that as head of the EPA, his job would simply be to carry out the intent of Congress and that his “personal opinion is immaterial” when it comes to climate science. What he didn’t mention, however, is that the EPA administrator is mandated by Congress to evaluate the best-available science and implement regulations based on what is needed to protect public health.

Pruitt also seemed unaware of the science surrounding lead poisoning. “That’s something I have not reviewed nor know about,” he said when asked if there was any safe level of lead in the human body. “I would be concerned about any level of lead going into the drinking water. Or obviously human consumption. But I have not looked at the scientific research on that.” (According to the Centers for Disease Control and Prevention, “No safe blood lead level in children has been identified.”)

On other issues, Pruitt appeared to contradict his record as Oklahoma attorney general. Asked about the impact of mercury pollution, Pruitt said mercury is “very dangerous” and that he’s “concerned.” In 2012, however, he signed onto a lawsuit challenging the EPA’s mercury regulations, arguing that “the record does not support EPA’s findings that mercury…pose[s] public health hazards.”

Asked about methane pollution—which often leaks from natural gas sites—Pruitt noted that it is a “more potent” greenhouse gas than carbon dioxide. He added that he’s “concerned” about methane, but not “deeply concerned.” As attorney general, Pruitt sued the EPA over its efforts to restrict methane emissions from oil and gas infrastructure.

Pruitt also told to Sen. Ed Markey (D-Mass.) that the EPA’s so-called “endangerment finding”—its ruling that that carbon pollution is a danger to public health and is therefore subject to regulation under the Clean Air Act—should continue to be enforced. “Nothing I know of that would cause a review at this point,” he said. As attorney general, Pruitt sued the EPA in an effort to overturn the endangerment finding.