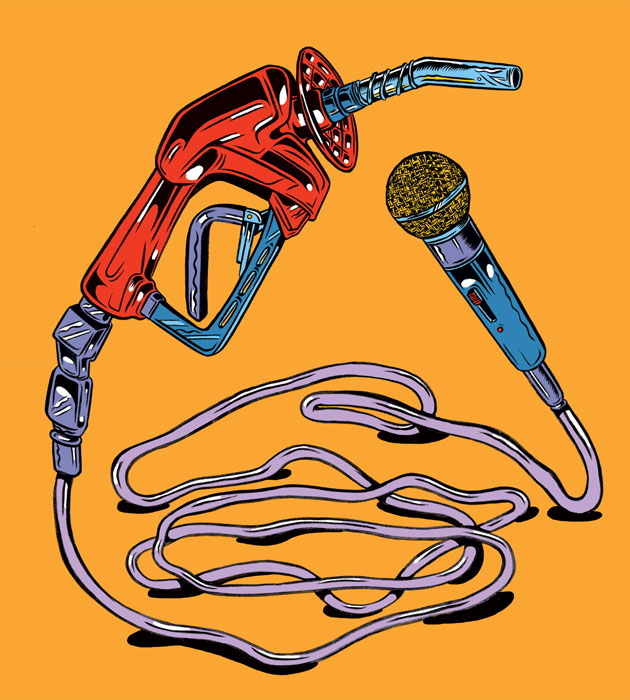 When he’s not building pipelines, Kelcy Warren likes to write melancholy country ballads. In one, the Texas billionaire sees his girlfriend with his best friend and then takes a solitary drive to New Orleans, where he feels even more lonely in the lively crowd. Another song mourns a lost friend: “Do you ever talk with angels? Put in a word for me.”

Pipeline foes have called Warren “the face of genocide for Native Americans” and “nothing but a cancer on the planet.”

With his business partners, Warren has distributed $223,000 to the three members of the Texas Railroad Commission, who rule on the eminent-domain requests his companies often use to run pipelines through privately owned farms and ranches. He personally spent $100,000 to help elect Trump—formerly an ETP shareholder—with the unvarnished expectation that the new administration would remove the last hurdles for the stalled North Dakota project on “January 20 or shortly thereafter.” Indeed, four days after taking office, Trump issued an executive order to speed the completion of the pipeline; this week, the Army Corps of Engineers granted an easement that will allow the construction to proceed.

The scale of Warren’s projects is mind-boggling. The 1,172-mile-long Dakota Access Pipeline will carry 570,000 barrels of oil a day through watersheds and wildlife habitats. Add that to the 75,000 miles of pipe Warren already owns, a carbon-based nervous system worth an estimated $67 billion, and it’s not hard to see why he has become the target of some truly nasty personal attacks. Pipeline foes have called him “the face of genocide for Native Americans” and “nothing but a cancer on the planet.”

After the Standing Rock protesters claimed DAPL was desecrating tribal gravesites, a Native American blogger labeled Warren a “racist” and pointed readers to his parents’ gravesites. An online meme falsely quoted him saying the #NoDAPL protesters were “dirty natives with their phony spirituality and dumbass ecological concerns.” Activists have picketed his Dallas headquarters and even, according to a friend, threatened his life and that of his son.

Warren has vigorously defended his projects, saying the Dakota Access Pipeline is “built to safety standards that far exceed anything government requires.” At a meeting of the Texas Parks and Wildlife Commission—to which Gov. Abbott appointed him as a commissioner in 2015—Warren responded patiently to a Native American elder who asked if he thought it was right to dig up ancestral graves: “No, sir. I don’t think that would be appropriate. I think that would be bad.”

“But you’ve been doing it,” the elder replied.

“No, sir. Obviously I don’t believe so.”

Sometimes Warren lets his exasperation show. “This is not a peaceful protest—there are violent people,” he told a Fargo, North Dakota, radio host in November. “They just want to stop fossil fuels.” Another time, he compared the tactics of some anti-pipeline activists to “terrorism.”

Warren declined to be interviewed for this article, but his friends, like former Cowboys safety Cliff Harris—who was ETP’s director—see him as “a special person” who “makes others believe the impossible is merely an obstacle.” Singer-songwriter Jimmy LaFave, Warren’s partner in an Austin, Texas, record label, describes him as a nature lover and a “very self-effacing, shy guy.” Together they produced Looking Into You, a 2014 Jackson Browne tribute album with tracks from Lyle Lovett, Bonnie Raitt, and Bruce Springsteen.

Warren owns multiple jets, ranches, a private island, a golf resort, and a 27,000-square-foot home with a baseball diamond and a bowling alley.

“He knows the names of all the mountain peaks, he builds nature trails, he gave Don Henley a lot of money to save Caddo Lake,” says LaFave, who set Warren’s “Talk to an Angel” lyrics to music on his own album. He adds that Warren once told him that America needs to stop using “dirty filthy diesel,” and that “if we could just get cars to run on natural gas, we could clean this country up so quick.”

To hear Warren tell it, his story is the stuff of the classic American Dream. He grew up in a working-class family in a small town in east Texas. He played football and basketball and worked summer jobs, including a gig sanding pipeline seams for Sun Pipeline, where his dad worked as a welder. At the University of Texas-Arlington, he “did pretty well at everything except attending class,” he once recalled. He flunked out and went home for a “come to Jesus” moment with his dad, gradually worked his way back into the university, and then landed an entry-level job at a small gas company in Dallas. Fifteen years later, he put together a pool of investors and bought a failing pipeline company with Ray Davis, who is now a part owner of the Texas Rangers. By 2002, he and Davis had amassed $50 million in assets.

Warren is selective about his public biography, leaving out his two ex-wives and a brother he hasn’t spoken with in years. What he does like to talk about is his love of music—Browne’s in particular. He has called the Late for the Sky album “a game changer.” Of Browne’s song “Sky Blue and Black,” he told an interviewer, “It’s one thing to write about your heart being broken, but it’s another thing to write that I’m past that now but I’ll always feel this way…That is an incredible message.”

It’s a sentimental side of a man known as a bulldog deal-maker who uses lawsuits and loopholes to get his way and spends huge sums on expensive toys. He owns multiple jets, a private island off Honduras, a 25,000-acre golf resort near Big Bend, and large ranches in Texas and Colorado. His 27,000-square-foot castle in North Dallas—he’s neighbors with George W. Bush—has a baseball diamond in the backyard and a bowling alley in the basement. A visiting Wall Street Journal reporter gushed about the “vast green-marbled bathroom” and the home studio where Warren keeps drumsticks signed by the Eagles and an autographed picture of Browne.

Yet Warren has been abandoned by the artists he reveres. The Indigo Girls, who appear on the Jackson Browne tribute CD, called for a boycott of the charity music festival Warren started. Actor Tommy Lee Jones signed a protest letter. Browne claimed he had no idea Warren was in the oil business and pledged to donate his licensing proceeds from the album to the Standing Rock tribes. “Jackson Browne and his management knew very well Kelcy Warren was in the energy business,” LaFave scoffs. “And Tommy Lee Jones did a whole ad campaign for fracking! He was a spokesman!”

To Warren’s friends, the focus on his controversial projects and lavish lifestyle reduces him to a caricature. Warren helps cover musicians’ medical bills and even funerals without seeking public credit, LaFave argues: “This whole thing about demonizing him to the point where he’s some kind of nonhuman being, it’s just really hurtful. Every human being has redeeming qualities.”

LaFave first met Warren at a Dallas gig years ago. “He was just a guy in the crowd,” he recalls. “I thought he was a local plumber or something.” Warren is the kind of person who would rather hang out with the roughnecks than with the suits, LaFave insists. He’s quirky, too—if he sees a penny on the ground, he’ll throw down a quarter and pick up both, because “‘my dad taught me he wouldn’t bend over to pick up a penny.'” When Warren renovated a Dallas park and renamed it after his son, Klyde, he did so under the condition that Klyde spend one afternoon a month picking up the park’s trash.

Not long ago, LaFave posted a defense of Warren on Facebook. Pipeline foes have been sending him hate mail ever since. “We’ve had people make veiled threats to burn down the studio,” he told me. The attacks on Warren are no different from the spiteful rhetoric of Trump loyalists, he adds. “When Kelcy hears stuff like that, that doesn’t help him be a better human being. That would probably just darken a person.”

LaFave calls himself a “yellow dog Democrat” who would vote for a yellow dog before he’d vote Republican. “I try to do my best not to use fossil fuel and burn gas all the time,” he says, “but everything’s made of oil—my TV, my iPhone.” He sighs. “You can tell I’m kind of conflicted. The eminent domain thing pisses everybody off. But he is not trying to destroy anybody’s life. He’s just like any other American entrepreneur saying, ‘Build, build, build.'”

Under the new administration, Warren will do just that.