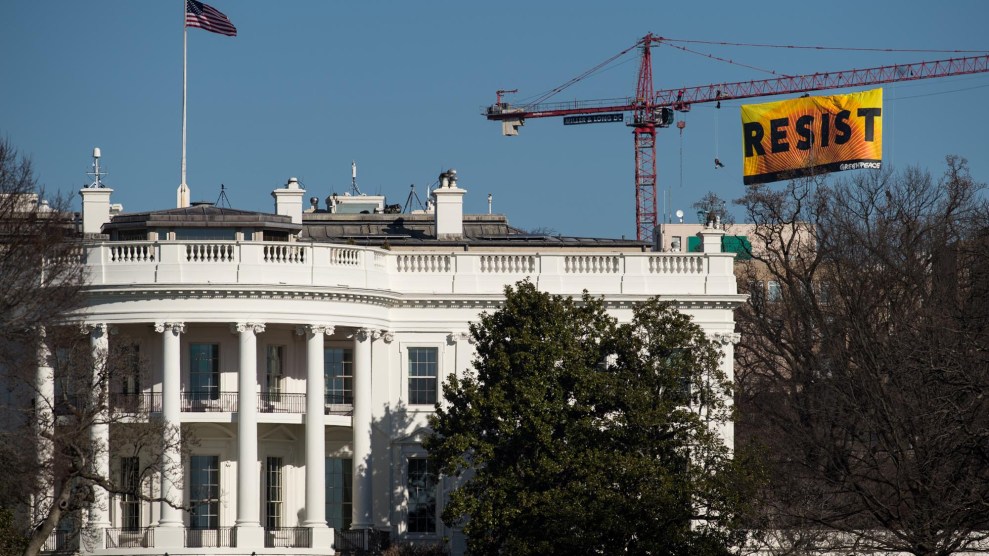 As we embark on month two of Donald Trump’s presidency, it’s hard to imagine a group of federal employees facing more uncertainty than the staff of the Environmental Protection Agency. Industry ally and new EPA Administrator Scott Pruitt can be viewed only as an agent of profound change, and he’s already faced intense opposition from Senate Democrats and from the staff he inherits.

A career EPA employee contacted me through a secure chat program and began to express profound concern over the threat now posed to their life’s work.

In recent days, both Bloomberg and the Washington Post have reported that the first moves Trump and Pruitt will make in their overhaul of US environmental policy will be to roll back parts of Barack Obama’s climate legacy and the “Waters of the US” rule—a thorn in the side of farmers and ranchers. This comes as no surprise—both of these policies were identified at the top of the administration’s “America First Energy Plan” agenda the moment the White House website switched over on inauguration day.

After his hostile nomination process, Pruitt made an appeal to civility Tuesday in his first address to EPA staff. “We as an agency and we as a nation can be both pro-energy and jobs and pro-environment,” he said. “We don’t have to choose between the two.” That message may ring a bit hollow to the agency’s staff, however—coming from a person who has dedicated his career to dismantling environmental safeguards. We appear to be entering an era in which environmental protection will officially be seen as an impediment to the will of industry. For EPA staffers who have devoted their lives and careers to preserving the planet, this is a heartbreaking development.

Shortly after the inauguration, a career EPA employee contacted me through a secure chat program and began to express profound concern over the threat now posed to their life’s work. What follows is a heartfelt essay that this official—who requested anonymity out of fear of retribution by the administration—wrote shortly after Pruitt’s confirmation last week:

I am a proud employee of the EPA. My colleagues and I are passionate about protecting the health of the American people—and the natural environment we share—from harmful pollution, chemicals, and pesticides. Many of us fear that the American people believe politicians when they say our agency is full of “lazy bureaucrats.” The reality is we all got into this work because we believe that it is our duty to protect people and the planet we live on for future generations. EPA is a public health agency, and we come to work every day focused on how we can better serve the American people and enable everyone, regardless of income, race, or any other factor, to enjoy equal protection and access to a healthy environment so everyone can prosper and enjoy the opportunities this country has to offer.

We are not against industry or economic prosperity; we want to work toward a society that cherishes people, the planet, and the economy—all at the same time.

“What type of nation are we when we allow our leaders to sign into law a rule that makes it EASIER for mining companies to pollute local waterways?”

When the EPA was established in 1970, by a Republican administration, the idea of a healthy environment was not a partisan issue. But since then, we have moved into an era where politicians and corporations started working to convince the American public that protecting their water, land, and air from harmful pollution was not in the people’s best interests and that our economy can’t be prosperous if our environment and public health is protected at the same time; this is a lie. What is true is that polluters don’t want to be held accountable for their actions. But when will our leaders see that people matter as well? The attitude that powerful polluters should be able to operate unchecked, no matter how many people are hurt, is the same all over the world.

What type of nation are we when we allow our leaders to sign into law a rule that makes it EASIER for mining companies to pollute local waterways? These same politicians will try to convince their voters that making it easier to pollute local streams is somehow good for them. Communities in West Virginia, Indiana, and Alabama with sky-high rates of cancer due to industry pollution shouldn’t be presented with the false choice of accepting even more poison in their local environment or having a job. No one should be told that they have to put up with cancer-causing poison in their water, air, and land. It’s shameful, and it’s wrong.

We at EPA believe that everyone should be able to breathe clean air, drink clean water, have healthy food, AND ALSO have a growing economy. Those that want to weaken EPA will say, “Well, the states can do it themselves.” EPA has always worked closely with states and respects jurisdictional power, but rivers and air don’t stop at state borders, and every American—no matter where they live—deserves to have a basic standard of protection.

You have to ask yourself: Who benefits when the EPA is weakened? Who benefits when our staff is laid off, cast aside, and when the agency is prevented from pursuing its mission of protecting public health and the environment? Who benefits when the agency can’t consistently enforce environmental laws that are meant to protect the public? The beneficiaries are not the people. Environmental protection is not a partisan issue. Science is not partisan. We all share this earth and its resources on which we all depend to survive. The amount of money you have should not determine if you get to live a healthy life, free from pollution. The politicization of this issue is manipulation by those who are already powerful. We, EPA professionals, have dedicated our lives to this work because we care about people more than we care about money or even being recognized for what we do.

“You have to ask yourself: Who benefits when the EPA is weakened?”

2015 was the deadliest year on record for people working to defend and protect the environment. Let that sink in. One hundred and eighty-five human beings were killed around the world (more than three for every week of 2015) because they dedicated their lives to protecting human health from pollution and preserving the beautiful planet we all cherish. The same year, the Environmental Protection Agency welcomed Berta Cáceres, along with the other winners of the Goldman Environmental Prize, to honor them for being global leaders in defense of human rights and environmental protection. Less than one year later, Ms. Caceres would be murdered in her home in Honduras because she was brave enough to challenge mining and dam-building corporations. She defended human rights and the environment, and her life was taken because of it.

Here in the US, those of us who work to protect the environment and human health from corporate pollution are lucky enough that we do not live under the specter of murder. We are, however, acutely aware that the forces behind these heinous crimes against environmental activists abroad are the same forces that are working against us in the US today. And make no mistake: These forces are poised to grow even stronger.

If it is discovered in the next few weeks that the EPA Administrator does in fact have even closer ties to polluting corporate interests than we feared, what will the public do? Will the capture of EPA by corporate interests be swept up in all the other horrifying news of the day or week? Or will the public finally decide that it is not acceptable to allow EPA, the only agency with a mission dedicated to protecting the environment, to be systematically dismantled, allowing those at the top to further concentrate wealth and power among themselves? Despite the long odds we face, we will never stop working to protect every person’s right to have a healthy place to live, work, and play. And if the new administrator casts me out of the job I love, I will not stop working toward the principles that have always animated my life. This is who I am, and that will never change. I stand in solidarity with brothers and sisters that work to protect human rights, human health, and the environment here in the US and all over the world. The struggle continues.