Despite growing international urgency to address climate change and two presidential candidates with deeply opposing views on climate science and policy, 2016 was an abysmal year for US broadcast news coverage of the issue, according to an analysis by Media Matters.

The analysis found that ABC, CBS, NBC, and Fox aired only 50 minutes of total climate coverage on their evening and Sunday news programs. This is in contrast to the 146 minutes of coverage clocked in by those same networks in 2015. 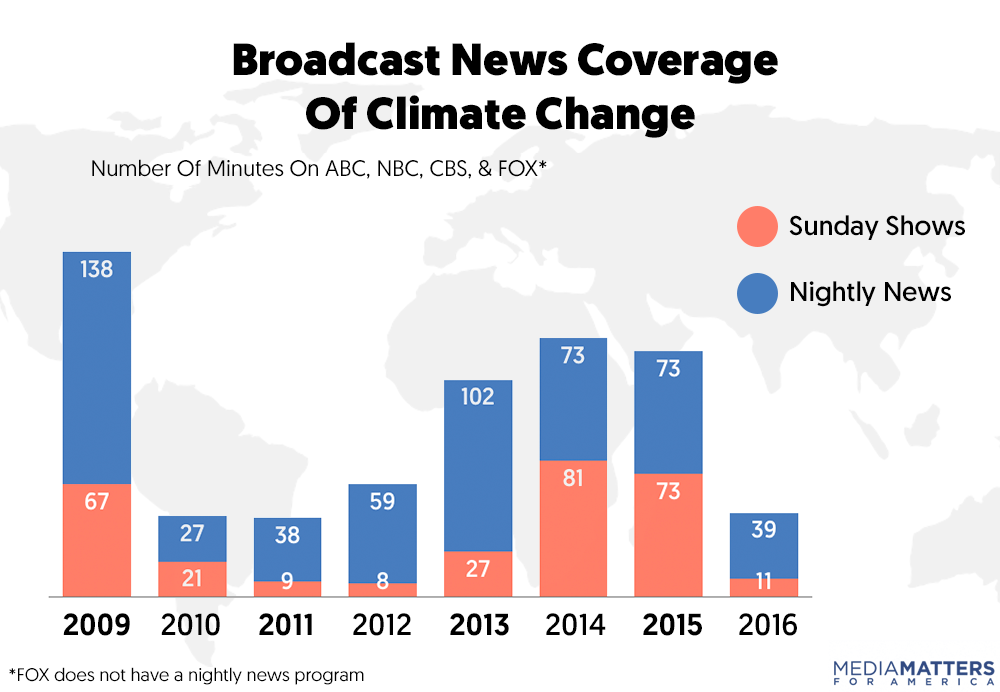 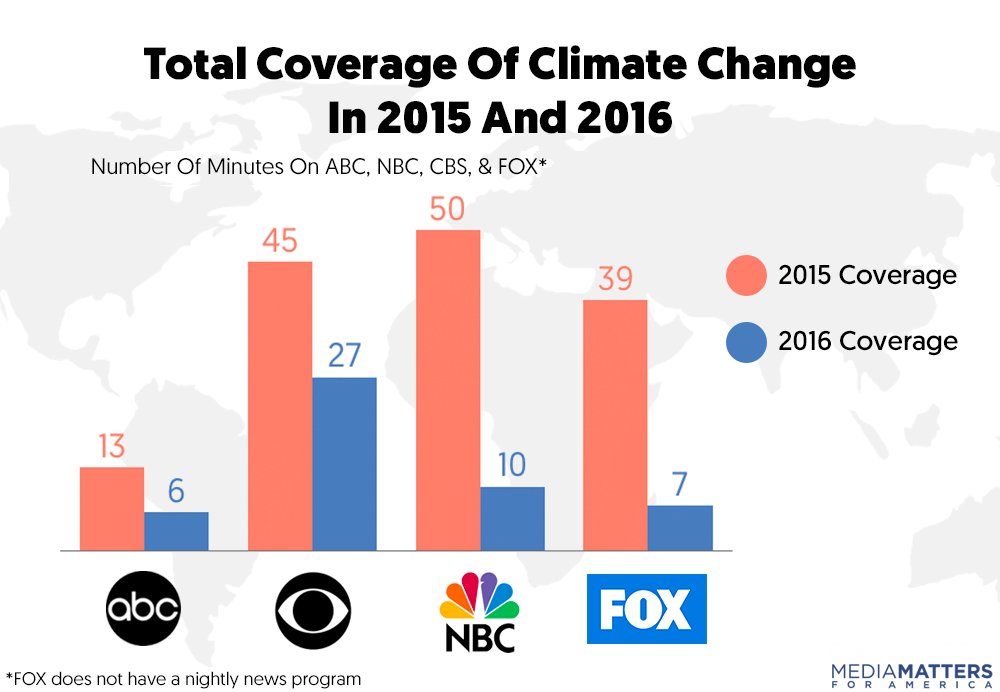 The significant drop in coverage certainly wasn’t for a lack of content. Several newsworthy climate milestones took place last year, including the signing of the historic Paris Climate Agreement; the UN, NASA’s, and NOAA’s announcements that 2015 was the hottest year on record for our country and the globe; the ongoing investigations of ExxonMobil’s decades-long cover up of research linking fossil fuel use and climate change acceleration; and extreme weather events, such as Hurricane Matthew and Louisiana’s record-breaking rainfall and devastating floods, which have a higher likelihood of occurring due to climate change.

The presidential election also provided “ample opportunity” to inform viewers about climate change, says Media Matters, but the networks did not take it. Most networks failed even to address the climate-related ramifications of a Clinton presidency as opposed to a Trump presidency. The exception was PBS NewsHour, which aired two relevant segments prior to the election. In contrast, the 25 climate change segments aired by ABC, CBS, NBC, and Fox all occurred after the election. The presidential debates also made little reference to climate change, as Climate Desk previously reported.

Even when networks did cover climate change, they did so without including scientific evidence. CBS, Fox, and PBS aired nine segments last year featuring Trump or Trump officials promoting climate change denial—five of which didn’t include fact-based rebuttals from the reporter. According to NASA, 97 percent of scientists acknowledge that our planet is getting warmer due to human activity.

In a separate analysis, Media Matters pointed out the effects of Trump’s proposed budget cuts on PBS NewsHour, which has consistently led climate coverage since at least 2012. According to the leaked proposal, Trump plans to defund the Corporation for Public Broadcasting, which uses roughly half its budget to support PBS member stations that broadcast PBS NewsHour. Stations in rural areas are especially reliant on this funding, with CPB funding accounting for 30 to 50 percent of their budgets on average, compared with the 15 percent average across all member stations.

Only 48 percent of adults in America recognize that climate change is being caused by human activity despite overwhelming scientific consensus, according to an October 2016 Pew Research Center poll.